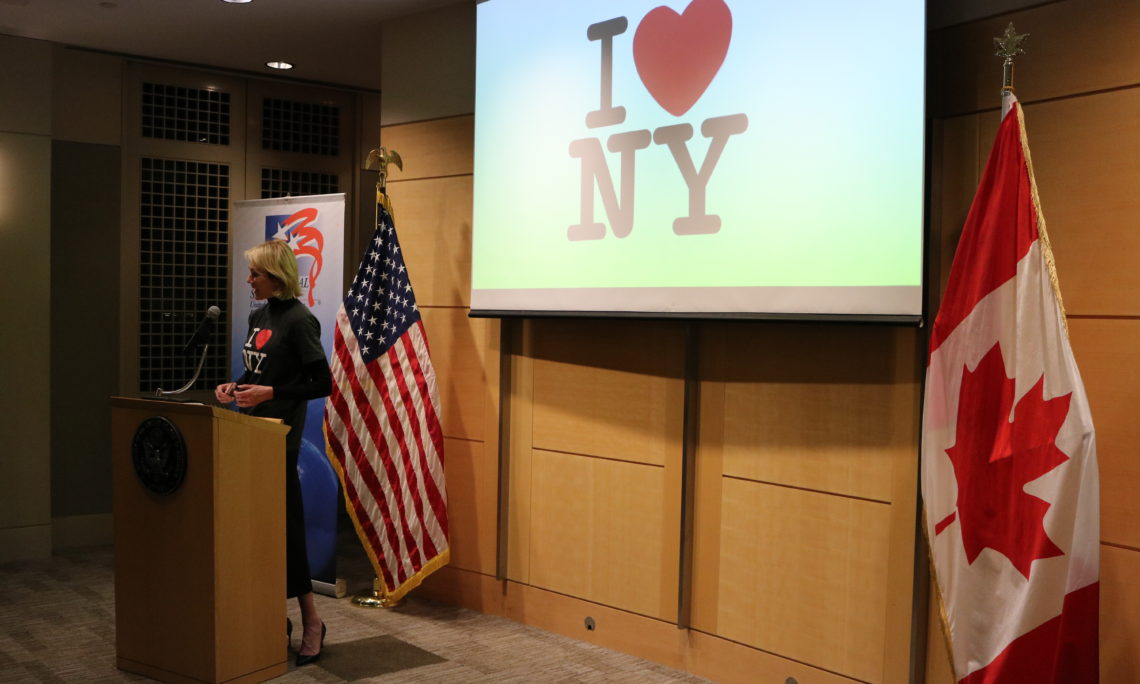 As Prepared for Delivery

Welcome to our celebration of the great state of New York, one of the very special places in my country that the whole world knows. And, we hope, our friends in Canada will get to know even better!

New York City, the Big Apple. Frank Sinatra famously sang that he wanted to be a part of it. In “Hamilton,” native New Yorker Lin Manuel Miranda calls it “the greatest city in the world.”

Record numbers of tourists have visited New York City in the last few years — around 60 million, but as you all know well, New York is about more than Manhattan, Brooklyn, Queens, the Bronx, and Staten Island too. From urban to suburban to rural, New York is a state of big cities and small towns, incredible natural beauty and some of the most famous man-made structures ever built.

I’m going to quote two more New Yorkers here: Billy Joel, born in the Bronx, sings of that ineffable “New York State of mind.” And Brooklyn-born Jay Z says there’s “nothing you can’t do” in New York. He’s right about that. There truly is NOTHING you can’t do in the Empire State.

Outside the City, there are some of the country’s best skiing, hiking, wineries, vistas, and historic sights. From the Hudson Valley, to the Adirondacks, to the Catskills, and, of course, to Niagara Falls, the thrilling waterfalls we share with Canada, New York is a year-round destination for tourists from all over the world.  This time of year offers holiday events straight through the New Year, along with the kind of winter sports very familiar to fun-loving and adventure-seeking Canadians.

As the weather warms up, there’s the national Baseball Hall of Fame in Cooperstown, the extraordinary sunsets over Lake George, the famous beaches on Long Island, the lively vibe of Saratoga Springs. From gorgeous parks to culture to history, from boating trips to driving tours to outdoor activities for the whole family, New York truly has it all.

And then there is the city.  Gotham City, as Batman calls it, has long been one of the planet’s great tourist destinations.  There’s some of the world’s best shopping, museums, restaurants, and people watching. And some of the fastest pedestrians you ever will see—and dodge! Many of the country’s most famous actors, broadcasters, writers, artists, and athletes call New York City home, living alongside some of the hardest-striving, friendliest people you will ever meet.

Those are the can’t-miss stops for most tourists.  But the new New York is so much more than these signature sites.  Over the last few years, the mayor’s office and NYC and Company, along with the private sector, have made major investments to increase not just the numbers of tourists but the quality of their experiences. Cleaner, safer streets and more hotel options.  Bike paths and an improved subway system.  Even more delicious, distinctive restaurants and stylish shops.  An extraordinarily diverse, ever-growing population that speaks over 200 languages.

For those of you who have never been to the High Line, I strongly recommend it to you.  The elevated views it offers of the West Side of Manhattan are an urban wonder.  The great Whitney museum has relocated right underneath it.  Chelsea Market is just blocks away. All testaments to the city’s ability to reimagine itself decade by decade.

Brooklyn and Queens now have restaurants and neighborhoods that rival anything you can find in Manhattan.  Prospect Park may not be quite as famous as Central Park, but it is a glorious oasis all its own. And the vibrant live music and art galleries in Brooklyn multiply literally every month.

And while Broadway continues to dazzle us with its extraordinary shows and talent (did I mention Lin Manuel Miranda?!), there are terrific Off-Broadway productions and fresh, ambitious theater experiences available in all five boroughs.

As you can tell from my enthusiasm about all this, and as my t-shirt says, I really do LOVE New York.  And so do the more than one million Canadians who visit the state every year.  Everything America has to offer is ON offer in New York. We would love your help in increasing those numbers of visitors even more.

Thank you for coming this evening and for your continued support for the mutually beneficial exchanges between our two countries.  And the first hot dog is on me!