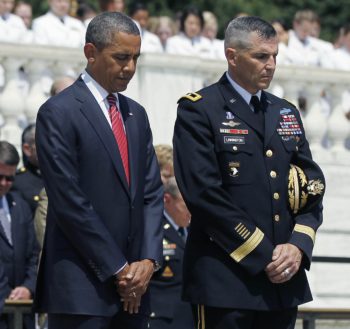 This May 28, 2012 file photo shows President Barack Obama standing with Maj. Gen. Michael S. Linnington, Commander of the U.S. Army Military District of Washington, during a Memorial Day wreath-laying ceremony at the Tomb of the Unknowns at Arlington National Cemetery in Arlington, Va. Linnington, now retired from the military, plans to leave his post as director of the Defense POW/MIA Accounting Agency to become the CEO of the Wounded Warrior Project, Thursday, June 16. 2016. (AP Photo/Pablo Martinez Monsivais, File)