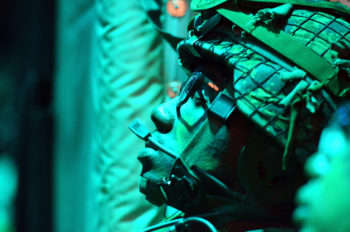 A Soldier with 3rd Battalion Princess Patricia’s Canadian Light Infantry rests aboard a C-130 aircraft on its way to Canadian Forces Base Cold Lake, where 3rd Battalion Soldiers will board American helicopters and assault nearby enemy positions throughout the night as part of Exercise Maple Resolve, May 27, 2016. The operation utilized both Canadian and American aircraft in order to demonstrate 3rd Battalion’s ability to project force across great distances (U.S. Army Sgt. William A. Parsons, 214th Mobile Public Affairs detachment)(Released)