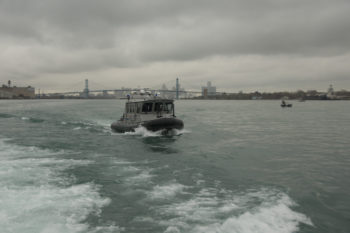 The crew of a Royal Canadian Mounted Police boat patrols the Detroit River just south of the Ambassador Bridge and the skylines of downtown Detroit and Windsor, Ontario, while carrying a U.S. Coast Guard law enforcement officer during a Shiprider patrol demonstration April 30, 2015. Shiprider is a program that enables specially-trained officials, from both Canada and the United States, to pursue or interdict suspected criminals transiting across the shared maritime border. U.S. Coast Guard photo by Petty Officer 2nd Class Levi Read