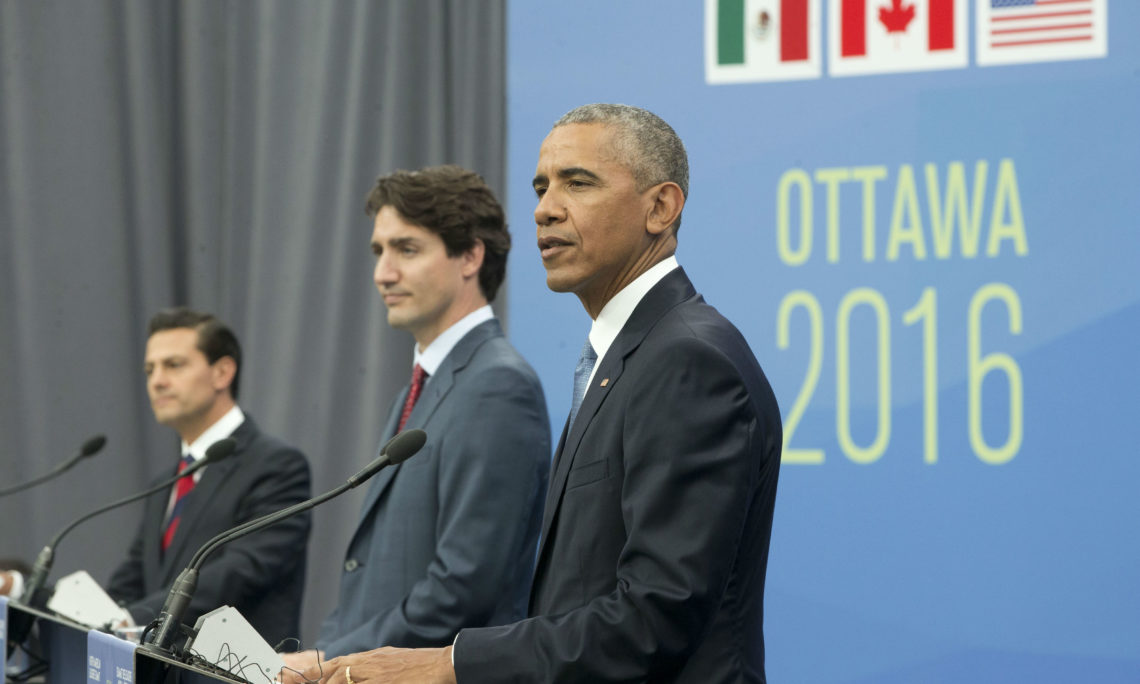 Today President Obama met in Ottawa, Canada with Prime Minister Justin Trudeau of Canada and President Enrique Peña Nieto of Mexico for the North American Leaders’ Summit. They announced initiatives to enhance North America’s economic competitiveness; expand our efforts on climate change, clean energy, and the environment; solidify our regional and global cooperation; and strengthen our security and defense.

The economies of the United States, Canada, and Mexico are deeply integrated. Canada and Mexico are our second and third largest trading partners. Our trade with them exceeds $1.2 trillion dollars annually. This trade will grow even more with the Trans-Pacific Partnership (TPP), which will promote high-standards trade and open doors for U.S. companies in North America and dynamic economies in Latin America and Asia. Under the North American Competitiveness Work Plan, the United States, Canada, and Mexico aim to reduce costs for business and facilitate partnerships by improving supply chain efficiency, advancing innovation and economic development, and engaging the private sector.

Recognizing the negative impact that excess production of steel and aluminum has on companies, workers and trade in North America, we reached consensus on a broad range of trade policy instruments and actions to enforce our rights, consistent with World Trade Organization rules and disciplines. We reaffirmed our three governments’ cooperation through the North American Steel Trade Committee (NASTC) to strengthen mechanisms at the Organization for Economic Cooperation and Development and other fora to quickly address government policies that lead to distortions in the steel sector and contribute to excess capacity, including curtailing government subsidies and other supports that artificially maintain or increase steelmaking capacity, enhancing transparency and information sharing about capacity and production developments, and seeking robust policy commitments to address excess capacity and encourage adjustment.

Canada, Mexico, and the United States further recognize the need for our Customs agencies to work together to ensure robust trade enforcement at our borders, including increased information sharing on high-risk shipments. We will initiate a trilateral customs dialogue at the North American Steel Trade Committee to discuss these efforts and additional collaboration in order to strengthen the North American position in the global economy.

Our economic competitiveness depends on our shared commitment to education, inclusive economic growth, and engagement with the private sector and civil society. The leaders announced the creation of the North American Center for Collaborative Development to pursue joint research and foster exchanges between academics and others on climate change, energy, manufacturing, economic integration, and indigenous peoples.

Leaders underscored the need to develop the next generation of indigenous leaders. The United States, through the State Department’s International Visitor Leadership Program and the Fulbright Specialist Program, will bring together indigenous youth and promote linkages between North American higher education institutions on projects that provide indigenous youth with opportunities to travel, engage with each other, and hone their professional skills.  Mexico joins the United States and Canada in the Let Girls Learn initiative to increase educational opportunities for adolescent girls by increasing enrollment in their Escuelas Mexico Program, which provides opportunities for girls to attend school throughout the hemisphere.

The United States, Canada, and Mexico signed a memorandum of understanding to advance joint efforts to promote women-owned small and medium enterprises by fostering partnerships. The Leaders resolved to develop partnerships among small business service centers to connect women-owned businesses; advance the Women’s Entrepreneurship in the Americas initiative, which increases women’s economic participation and reduces barriers faces when starting and growing a business in North America; and provide business growth opportunities by connecting women entrepreneurs during the upcoming Americas CompetitivenessExchange on Innovation and Entrepreneurship, which Canada will host in September.

The leaders announced their commitment to establish a North American Cluster Map. Mexico will publicly release its national map in July, and Canada has committed to develop a national map. The maps, which will show clusters of interconnected companies, suppliers, and institutions and be available for free on line, will allow individuals, businesses and local governments to identify investment and trade opportunities and plan economic development strategies to most strategically identify areas for investment and understand the strengths of their region.

Improving our economic competitiveness requires reducing the time and cost for individuals to cross our borders. Nearly 5 million people already participate in our individual countries’ trusted traveler programs, facilitating entry into each country for low-risk, pre-screened travelers by allowing them to bypass lines and use automated kiosks to pass through customs and immigration checks more quickly. To considerably increase participation in the program, the United States, Canada, and Mexico will inaugurate a trilateral trusted traveler program by the end of 2016 and launch a single portal application for all three countries’ programs by the end of 2017.

Innovation and Technology in Border Processing

We are committed to ensuring we have in North America the most innovative and efficient borders in the world through the use of advanced technology, innovative processing, and automated systems.  We will continue to leverage advanced tools to make processing at the border faster and more efficient, including in the areas of intelligent transportation systems, electronic kiosks for traveler purposes, and mobile phone applications. We will continue to develop innovative approaches to border management, such as remote traveler processing pilots using kiosks that incorporate live video feeds, a single web portal to apply for trusted traveler membership, and more aligned cargo information requirements to simplify reporting for traders. We will also bolster our use of data analytics to support economic impact and flow projections and to inform resource allocation requirements for cross border infrastructure.

The United States, Canada, and Mexico commit to pursue greater alignment of our respective energy sectors to promote greater trade and economic competitiveness. Building upon existing bilateral cooperation, regulators from all three countries will meet this fall to determine how to reduce or eliminate existing differences in regulatory requirements and prevent future discrepancies.

The United States, Canada, and Mexico share a strong track record of actions to tackle climate change, from supporting the Paris Agreement to ambitious domestic actions that support a clean and resilient economy at home. The three leaders declared their common vision in a historic North American Climate, Clean Energy, and Environment Partnership, described in a Leaders’ Statement and Action Plan that details the actions our leaders will pursue. These actions include:

Leaders announced the creation of a regular trilateral coordination process to ensure implementation of NALS commitments. The first meeting will be held in the fall.