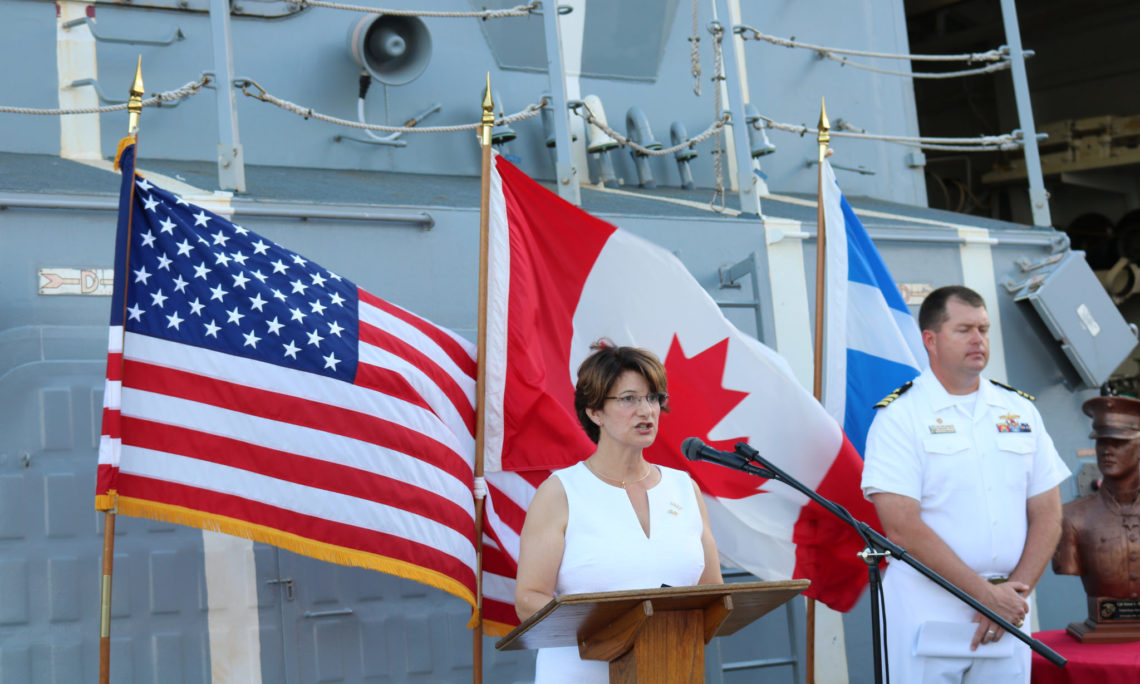 This year, the traditional 4th of July celebrations of the U.S. Consulate General in Québec City were uniquely significant, as they took place aboard two U.S. ships on an official visit to Québec as part of the city’s much-anticipated Rendez-Vous Naval 2017. The USS Jason Dunham and the USCGC Eagle moored in the Old Port of Québec, drawing the attention of thousands of admirers and visitors. The contrast between to two ships was striking; the first was an imposing Arleight Burke-class destroyer launched in 2009 while the second was a majestic three-mast sailboat launched in 1936.

The one-off visit of these two ships offered great opportunities for the U.S. Mission in Canada to emphasize U.S.-Canada friendly relations and the strong partnership linking the two countries. The ships were opened for public visits and they welcomed, in coordination with the Consulate General, additional groups for VIP tours. Alumni from the International Visitor Leadership Program, diplomatic representatives assigned in Canada, as well as groups from the American Colony of Québec and the Voice of English-Speaking Québec (VEQ), enjoyed these VIP tours and interacted with the crew members of the ships.

Upon their arrival, crew members from both ships wanted to participate in local activities and proposed to do some community work, as they often do when they are abroad. In an intense full day program, cadets from the Jason Dunham went to Wendake – a local Indigenous reserve – to help with shoreline cleaning, before leaving for the military base of Valcartier, where they played a friendly softball game with Valcartier’s team. For their part, the sailors of the Eagle cleaned up the yard of a school and visited children at a hospital to talk to them about their experience on a tall ship. These community events left lasting memories both for locals and for the U.S. crew members.

On July 20th and 21st, two receptions were organized aboard each ship to celebrate the U.S. Independence Day. Hundreds of guests attended the receptions and were warmly welcomed by the Consul General Allison Areias-Vogel, the Commander John Hamilton of the Jason Dunham and Captain Matthew Meilstrup of the Eagle. The receptions were a great occasion to see people of all backgrounds to come together in celebration of the anniversary of the signing of the Declaration of Independence, and also allowed U.S. and Canadian servicemen and women to meet one another and form lasting bonds between our country’s military forces. These receptions, along with the community events and the VIP tours, were an undeniable success and a tribute to these two beautiful ships and the remarkable setting of Rendez-Vous Naval.