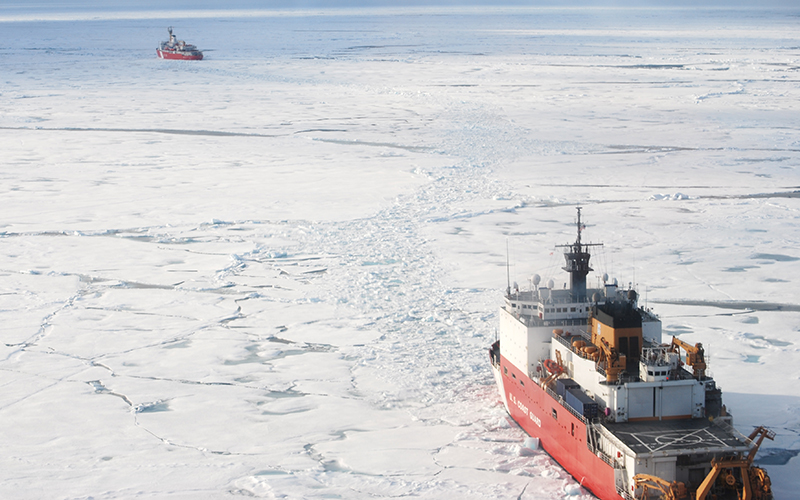 As Canada celebrates the 150th anniversary of Confederation, the Embassy of the United States in Ottawa will present two exhibitions and a photographic essay at the National Capital Commission’s 150 International Pavilion, 50 Sussex Drive, from February 1 to February 19, 2017.

The bilingual, multimedia displays will showcase the historic relationship between the United States and Canada, our shared Arctic heritage, and U.S.-Canada cooperation in the Arctic.  The exhibits highlight intriguing stories involving the two countries and emphasize the important cultural connections they share.

The Embassy is also pleased to feature “North is Freedom: The Legacy of the Underground Railroad,” a photographic essay by Canadian photographer Yuri Dojc that celebrates the descendants of 19th century freedom-seekers who escaped slavery in the United States by fleeing to Canada.

The International Pavilion will host an array of public events including panel discussions, film screenings, and a musical performance. The pavilion will be open to the public Mondays to Saturdays from 10 a.m. – 8 p.m., and on Sundays from 10 a.m. – 5 p.m. Further information on the schedule of events can be found in the appendix below.

Free shuttle bus service will link Confederation Park and the International Pavilion every weekend, from 10 am to 5 pm.

Eyes on the Arctic

This bilingual, multimedia display will showcase the lives of Arctic Indigenous peoples and U.S.-Canada cooperation on Arctic issues, including research, wildlife, and the environment.

This bilingual, multimedia display will explore the historic relationship between the United States and Canada, highlighting intriguing stories involving our two countries and emphasizing the important cultural connections we share.

This evocative photographic essay celebrates the descendants of freedom-seekers who escaped slavery in the United States and fled to Canada in the years before the American Civil War.

Public Events at the Pavilion

The U.S. Embassy in Ottawa invites you to visit the International Pavilion at any time during opening hours, and to participate in public events hosted at the Pavilion, listed below:

Join explorer, Harvard scientist, and Smithsonian researcher Dr. Martin Nweeia as he shares new research and the wonders of the narwhal’s incredible tusk. Kids of all ages are welcome to participate in the Eco-Heroes Workshop and Art Challenge.  After creating their masterpieces at the art station, young artists can display them on the Eco-Heroes Wall of Fame presented by Pamela Peeters, an international award-winning environmental economist and certified eco-consultant.

Through compelling interviews, artistic animation, and clever perspectives on popular culture, CODE examines the reasons why more girls and people of color are not seeking opportunities in computer science and explores how cultural mindsets, stereotypes, educational hurdles, and sexism affect this issue. CODE aims to inspire change in mindsets, in the educational system, in startup culture, and in the way women see themselves in the field of coding.

By 2017, the app market will be valued at $77 billion. More than 80% of app developers are male. The Technovation Challenge aims to empower girls worldwide to develop apps for an international competition. From rural Moldova to urban Brazil to suburban Massachusetts, CODEGIRL follows teams who dream of holding their own in the world’s fastest-growing industry, technology. The winning team gets $10,000 to complete and release their app, but every girl discovers something valuable along the way.

Join Fulbright Scholar Dr. Dee Williams, Deputy Director of the Alaska Regional Office of the U.S. Geological Survey, for a discussion on integrating Indigenous knowledge with Arctic science and environmental assessments, addressing some of the current challenges and probing ideas about constructive directions in science. Dr. Williams currently holds a position as Fulbright Visiting Research Chair at the University of Ottawa, Institute for Science, Society and Policy, seeking to advance the inclusion of Indigenous knowledge within the work of Arctic science and regulatory policy.