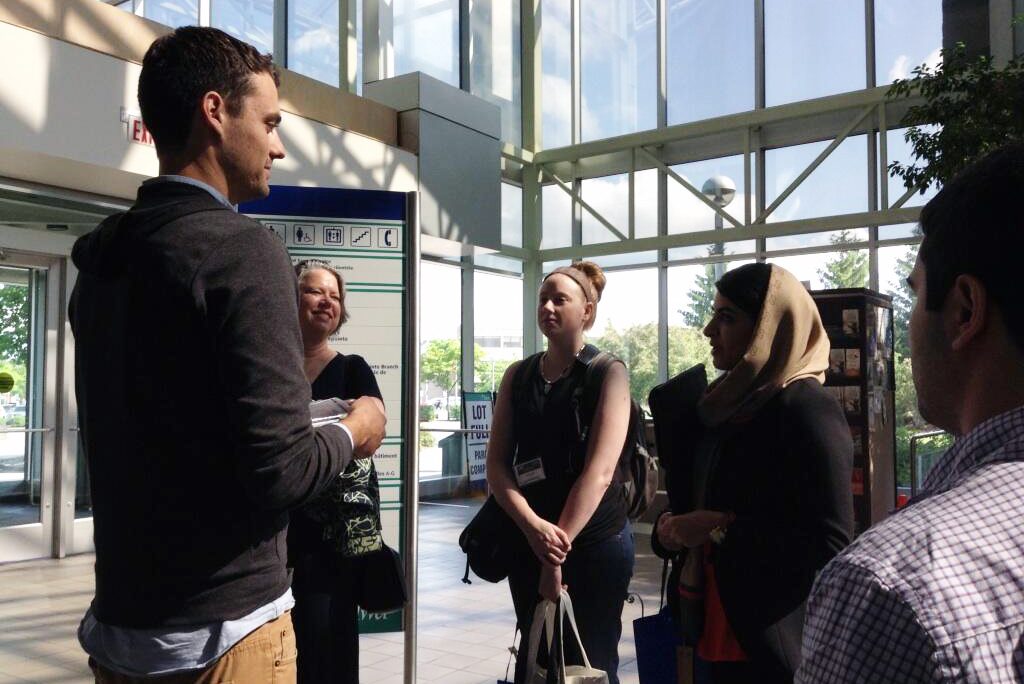 Facilitator Chet Kittleson meets some of the Weekend's participants as they arrive.

Sixty young Canadian future entrepreneurs took part in three days of ideas, inspiration, and pitches at the U.S. Embassy Ottawa’s first Startup Weekend from June 13 -15, 2014. The aspiring entrepreneurs were selected from a Canada-wide call for applications, and came from all over Canada, from Prince George and Vancouver, BC in the West, to Saint John’s, Newfoundland in the East, as far North as Iqaluit, Nunavut, and from 16 other Canadian cities in between. The participants ranged in age from 18-30.

Supported by UP Global, a U.S.-based non-profit dedicated to fostering entrepreneurship, and Imagine Space, a joint American Corner makerspace project of the U.S. Embassy and the Ottawa Public Library, the Startup Weekend connected would-be entrepreneurs with American and Canadian mentors who brought a range of experience in startup companies and business development. Google Canada showed its support for cross-border entrepreneurship by generously providing all food and meals for all participants at the 3 day event.

Over the weekend, the participants had the opportunity to brainstorm and pitch their business ideas, develop teams, and compete to turn their plans into a startup company with guidance and support from the mentors. The winning team, Shout!, also won $3000 in legal services generously donated by Dentons Canada LLP.

“Startups are engines of job creation. Entrepreneurs intent on growing their businesses create the lion’s share of new jobs, in every part of the United States and Canada, and in every industry,” said Ambassador Heyman in his remarks to the future business leaders of tomorrow at the Startup Weekend kickoff Friday evening. “It is entrepreneurs who will build the new industries of the 21st century, and solve some of our toughest global challenges.”

Bringing the global, grassroots movement of entrepreneurs learning the basics of founding and launching successful business ventures to Ottawa, U.S. Embassy’s first Startup Weekend will help create a strong, binational network of future entrepreneurs and innovators to help drive economic development on both sides of the border.