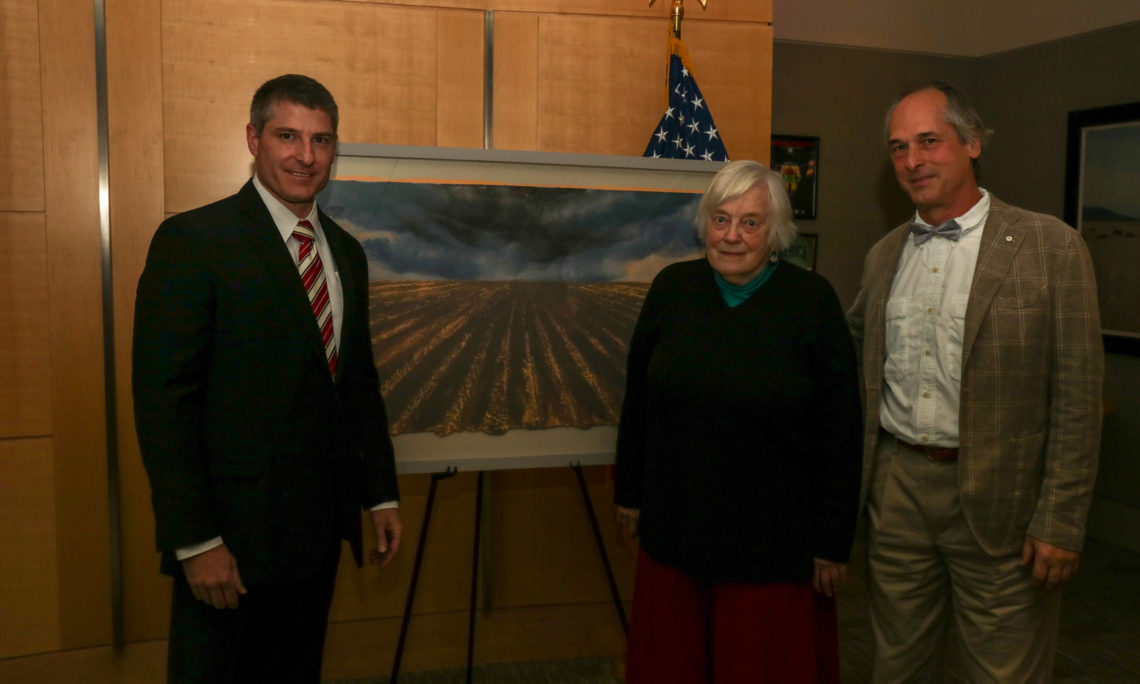 U.S. Embassy Ottawa Legal Attaché Kevin Vorndran welcomed acclaimed artist Claire Van Vliet to Ottawa this week as he accepted a piece of Van Vliet’s artwork to the U.S. Department of State’s permanent collection. “Flatlands”, a work inspired by the artist’s train crossings of both the Canadian and American plains, features Van Vliet’s innovative ‘pulp painting’ technique in which she mixes pigment with pulp paper and applies it like paint to her artwork.

While some may say this story began in February 2017 when Kevin requested that the Department of State update the Embassy’s Legal Attaché offices with a piece of artwork with Canadian connections, it actually began much longer ago.

Claire Van Vliet’s connection to Canada is a very personal one. Van Vliet was born in Ottawa in 1933, and spent her early years in England and various towns and cities across Canada. Her father, Group Captain Wilbur Dennison Van Vliet, was a famous Canadian WWII pilot in the Royal Canadian Air Force. Group Captain Van Vliet led the 110th Squadron to England in December 1939 and died during the war.  He now rests at the National Military Cemetery of the Canadian Forces in Ottawa.

Orphaned at 14, Van Vliet went to live with an aunt in California where she completed her education in San Diego and Claremont. Her early exposure to nature crisscrossing Canada heightened her interest in the vast continental landscape and inspired many of her celebrated images.  In addition to her acclaim as an artist, Van Vliet founded Janus Press, and was one of the earliest recipients of the MacArthur ‘Genius Award’ for her innovations in bookbinding. She now lives in Vermont, and has donated more than 100 of her vibrant lithographs and paperworks to grace the offices and hallways of U.S. embassies around the world.