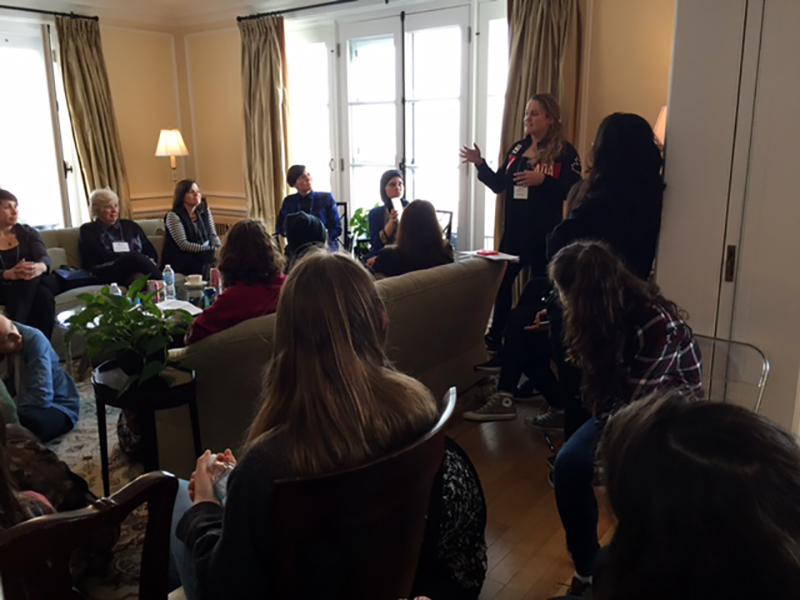 “Today, I’m delighted to take the opportunity to celebrate diversity and talent, courage and determination of inspiring women who helped shape our societies,” said Chargé d’affaires Elizabeth Moore Aubin as she addressed a group of approximately 60 women and girls during a mentoring event on International Women’s Day held at the U.S. Consulate General in Quebec City. Chargé d’affaires Aubin underscored the need to continue promoting the role of women, and drew on the theme of U.S. and Canadian shared values of equality and justice for all.

The U.S. Government has been engaged in efforts to promote women and girls while combating discrimination, eliminating violence against women and girls at home and abroad, supporting women-owned businesses and entrepreneurs, and encouraging women’s economic and political leadership. Recently, President Donald Trump and Prime Minister Justin Trudeau launched the United States-Canada Council for Advancement of Women Entrepreneurs and Business Leaders in order to bolster equal opportunities for women in the workforce. In February 2017, President Trump signed two bills to promote women entering and leading in STEM fields — science, technology, engineering and math.

Along these efforts to promote women empowerment, the U.S. Consulate General in Quebec City, along with the Conseil du Statut de la Femme, the French Consulate, and les Amies d’Affaires held a mentoring event for girls aged 14-17 from various schools in the Quebec City area.

Approximately 17 influential women, including Chargé d’affaires Aubin and Consul General Allison Areias-Vogel, met with 27 girls to discuss challenges women face throughout their life and career. The one-day event was intended to inspire and inform girls who will soon be making life building decisions about their futures and careers. Focusing on diversity, the event brought together women and girls from diverse milieus and communities, including Indigenous and Muslim communities.

The day was focused on “speed mentoring,” which allowed the women to share information with the girls about their careers and the challenges they have faced. A buffet style luncheon provided time for networking while attendees mingled and exchanged. During the afternoon session, the women each shared with the girls a piece of practical advice as well as a humorous moment about the challenges or failures they all had to overcome in their professional efforts. The exchanges exemplified the importance of resilience, self-esteem and determination. The event was amplified through social media featuring the Department of State’s theme for International Women’s Day “Be Bold for Change”.

Two U.S. Consulate General Québec City alumni were among the women of influence: Chelsea Buyers, Director of General Services at the Quebec City Police Department, FY14 IVLP participant on Interfaith dialogue and human rights, and Eve Langelier, Associate Professor at Université de Sherbrooke and Chairholder of Quebec’s Chair for Women in Science and Engineering, who participated in the FY16 IVLP On Demand program “Women in STEM.”