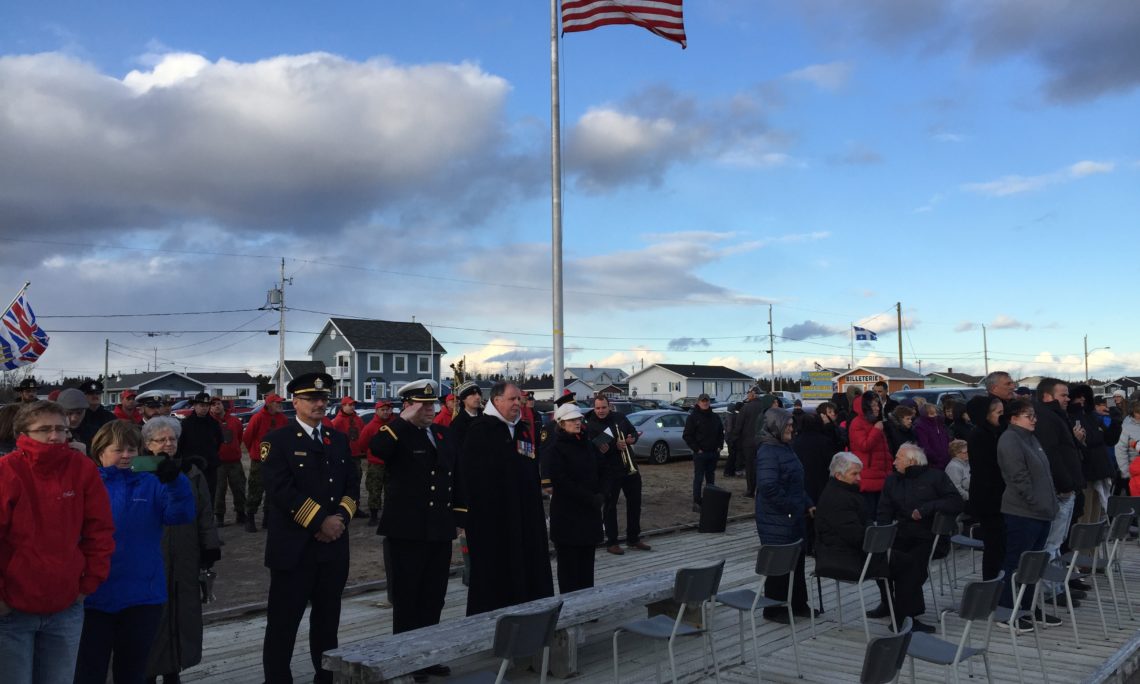 Remembering a day of tragedy and heroism, U.S. Consul General Allison Areias Vogel unveiled a plaque to commemorate a plane crash in Québec 75 years ago.

On November 2, 1942, PBY Catalina, a U.S. Army Air Forces amphibious plane, was lost off the Canadian coast near the village of Longue-Pointe-de-Mingan.  Nine crew members were on board when the aircraft sank after slamming into high waves during an attempted takeoff.  The town’s fishermen braved the churning waters to find four crew members clinging to the fuselage before the plane sank into the Gulf of St. Lawrence.  Five other Americans, including the pilot, were trapped inside the seaplane and lost their lives.

The aircraft was in Canada to support the establishment of a chain of airfields in Northern Canada, Greenland, and Iceland, a strategic air corridor to Europe to fly aircraft and supplies to the United Kingdom from the Eastern United States.  Built in the United States during World War II and based in Presque Isle in Maine, the aircraft ferried men and equipment to the airfield at Longue-Pointe-de-Mingan.  In May 2009, Parks Canada underwater archaeologists found the fuselage of the aircraft while conducting work in an area adjacent to the Mingan Archipelago National Park Reserve of Canada.  In 2012, a 50-person team from the U.S. military traveled to the site to retrieve personal artifacts and remains.  The team returned the airmen’s personal belongings to their families.  The drowned airplane still remains in the St. Lawrence waters.

The artifacts found at the crash site, including a logbook and a life vest, were restored by the municipality and the Québec Ministry of Culture and are currently displayed at the museum founded to honor the victims.  The museum is part of the municipality’s main building and was inaugurated during the commemoration ceremony.  Two families will be donating personal objects found at the site of the accident to be part of the exhibit.  The names of the servicemen who perished were engraved on the bronze plaque:

To honour the U.S. servicemen who died in an accident during a wartime mission the morning of November 2, 1942, and the inhabitants of Longue-Pointe-de-Mingan who provided assistance to the survivors.

Four members of the Couzins family travelled from Ohio to honor Private Couzins.  The ceremony on November 4 started with a commemoration at the parish of Saint-François d’Assise followed by unveiling of the plaque.  During a water ceremony, an official from Parks Canada and a counselor from the municipality threw a wreath into the waters to pay tribute to those who lost their lives in the St. Lawrence.  In her remarks, Consul General Areias Vogel honored the fallen, the survivors, the families, and the local community while highlighting the strong links between the United States and Canada. Next to the plaque, the American flag will continue to fly at Longue-Pointe-de-Mingan, telling the story of the longstanding friendship between the two countries.