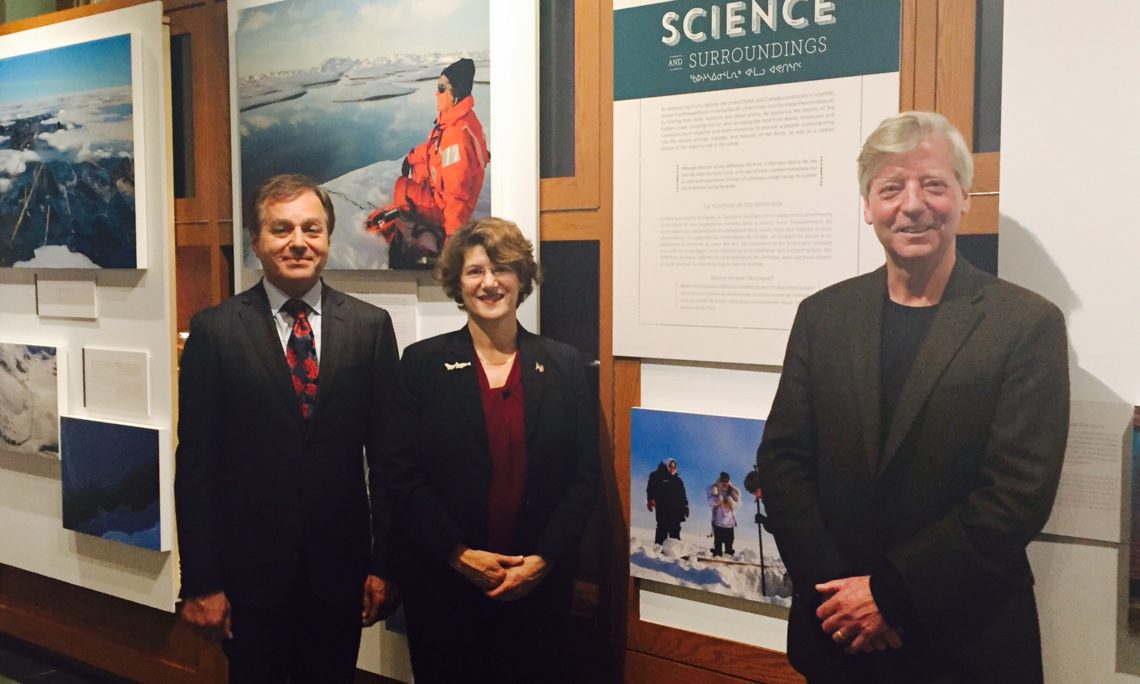 To mark Canada’s 150th anniversary of the founding of Confederation, the U.S. Consulate General in Quebec City hosted a dual exhibit entitled Northern Stars and Eyes on the Arctic. Celebrating 150 years of friendship between the United States and Canada, the exhibit was displayed at old Quebec’s historic Post Office from May to June and attracted a number of inspired visitors. The traveling exhibit was designed by the U.S. Embassy in Ottawa and Meridian International in Washington and will continue touring Canada until the end of 2017.

Northern Stars sketches 150 years of common history and close relations between the United States and Canada, emphasizing the important cultural connections and institutional ties that link the bilateral trading partnership. Eyes on the Arctic illustrates the accomplishments of Canadian and American scientists and researchers who dedicated their lives to advance research on the Arctic.

As part of the commemoration, the Consulate hosted Stephen Gorman, a noted wildlife photographer who specializes in the Arctic, and Dick Custin, Cultural Affairs Officer from the U.S. Embassy in Ottawa, during a two-day program that included group visits and meetings with leading Arctic scientists at Quebec’s Laval University, as well as college students and local artists. Audiences were treated to glowing pictures of Inuit portraits and Arctic landscapes, as well as eloquent behind-the-scenes stories from Mr. Gorman.

During the visit, Consul-General Allison Areias-Vogel hosted an opening reception where guests could view vivid Arctic photographs, as well as historic pictures of the Klondike Gold Rush, Harriet Tubman, and the Shamrock Summit held in Quebec City in March 1985. Many of Eyes on the Arctic’s photos were taken by Mr. Gorman, and he illustrated the photographs with his personal narrative at the reception.

In her opening remarks at the reception, the Consul-General observed: “This year, Canada celebrates its 150th anniversary of Confederation. We join you in honoring this moment while remembering our longstanding ties. The United States and Canada share more than just a border, we share a common history and a set of values. We enjoy the world’s largest bilateral relationship, and a unique and special bond. Happy 150th Anniversary Canada!”