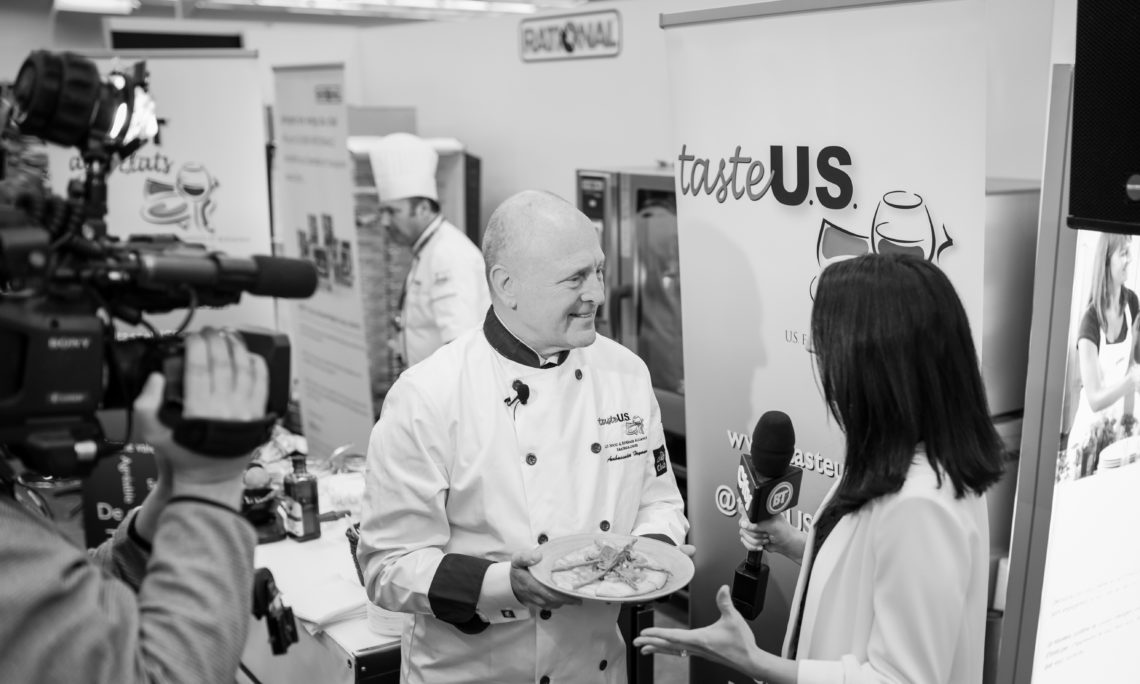 Fresh fruits, delectable dates, succulent sauces, nutritious nuts, and heavenly honey were just a few of the American products on exhibit at the 2016 edition of SIAL CANADA, the largest food innovation trade show in North America. The United States took center stage as the Country of Honour from April 13 to 15 at the Palais de congrès exhibition centre in Montreal, where more than 30 American exhibitors displayed their innovative products.

U.S. Ambassador to Canada Bruce Heyman donned a chef’s jacket to prepare toasted flatbread with bruschetta for a cooking demonstration at the Taste U.S. Food and Beverage Alliance pavilion. Using all-American ingredients, Ambassador Heyman promoted the excellent flavor, quality, and diversity of products available from the United States, as well as the special relationship between Canada and the United States.

Holly Higgins, Minister-Counselor for Agricultural Affairs at the U.S. Mission to Canada, underscored the special relationship between the two countries with key facts and figures: “Agricultural trade has always been a feature of our shared vibrant trade relationship and extends back to when both countries were still colonies. Fast forward to today and two-way agricultural trade totals US $45 billion annually. U.S. exports of consumer-ready foods and beverages to Canada are valued near US $18 billion annually, accounting for 64% of Canadian agrifood imports.”

The 13th edition of SIAL CANADA brought together 850 exhibitors and 15,000 visitors from Canada, the United States, and 60 other countries on more than 240,000 square feet of exhibit space. The Country of Honour distinction brought added exposure to the USA Pavilion and its new products.