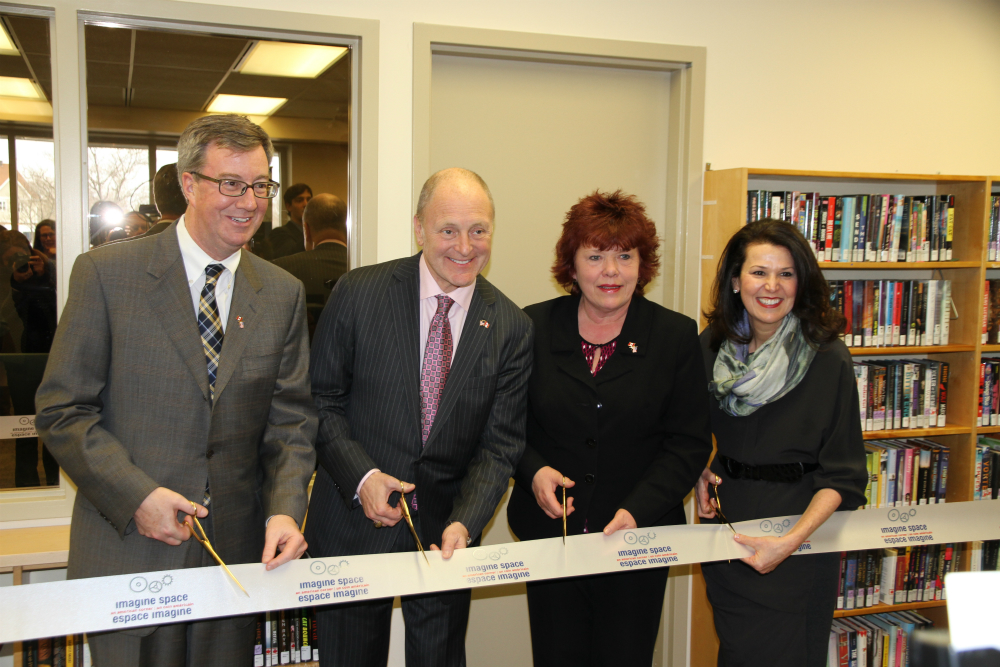 The very first American Corner in Canada, called the Imagine Space: An American Corner, was opened in a ribbon-cutting ceremony and reception at the Nepean Centrepointe Branch of the Ottawa Public Library. Ambassador Bruce Heyman and Mrs. Vicki Heyman joined Ottawa Mayor Jim Watson and City Councilor and Public Library Board Chair Jan Harder in welcoming members of the Ottawa library and the local maker communities to an opening reception to launch the Imagine Space on April 23, 2014.

The Imagine Space joins some 700 other American spaces in 152 countries. American Corners (aka Spaces) are physical centers where the public are welcome to visit, for free, to learn about and connect with the United States. In 2013, American Spaces worldwide received over 24 million visitors. American Spaces are often created in partnership with a local institution; for this space, the Embassy partnered with the Ottawa Public Library.

The Imagine Space is a makerspace, featuring the latest in 3D printers, industrial laser cutters, and digital media creation. As a unique American Corner, it is devoted to hands-on collaborative creation and digital literacy, and to innovation and entrepreneurship — two essential drivers of economic growth and the lifeblood of our shared economic prosperity in the U.S. and Canada.

“We’re delighted at our partnership with the Ottawa Public Library, a strong and vibrant public library system that serves the needs of the entire city by supporting literacy and lifelong learning,” Ambassador Heyman remarked at the ceremony. “And what better way for the U.S. to support that, and to be an asset to the community, than by opening this Imagine Space. The makerspace movement is growing across the U.S. and Canada and there’s no more logical place for makerspaces than in public libraries. A makerspace perfectly exemplifies the ideals of sharing knowledge and experience, and of hands-on creation and design.”

The Embassy will continue its engagement with the public through the American Corner by offering public programs in the coming months in a number of areas connected with the Imagine Space. Follow us on Twitter (@usembassyottawa) and Facebook for information on upcoming programs.