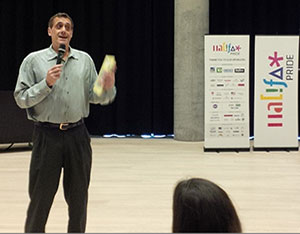 Consulate Halifax was pleased to help sponsor Stuart Milk, from the Harvey Milk Foundation, on his visit to Halifax for Halifax Pride 2015. While in Halifax, Stuart Milk took part in many events including a screening of the Academy Award winning movie about his uncle, “The Times of Harvey Milk.” He also participated in a candle light vigil, did several media interviews, and spoke as part of a panel which looked at the very disturbing issues still facing LGBTQ+ people in many parts of the world. At each event Stuart brought the message that the fight for diversity is not over and that it is through education that the community will learn to stand up for diversity in all forms.