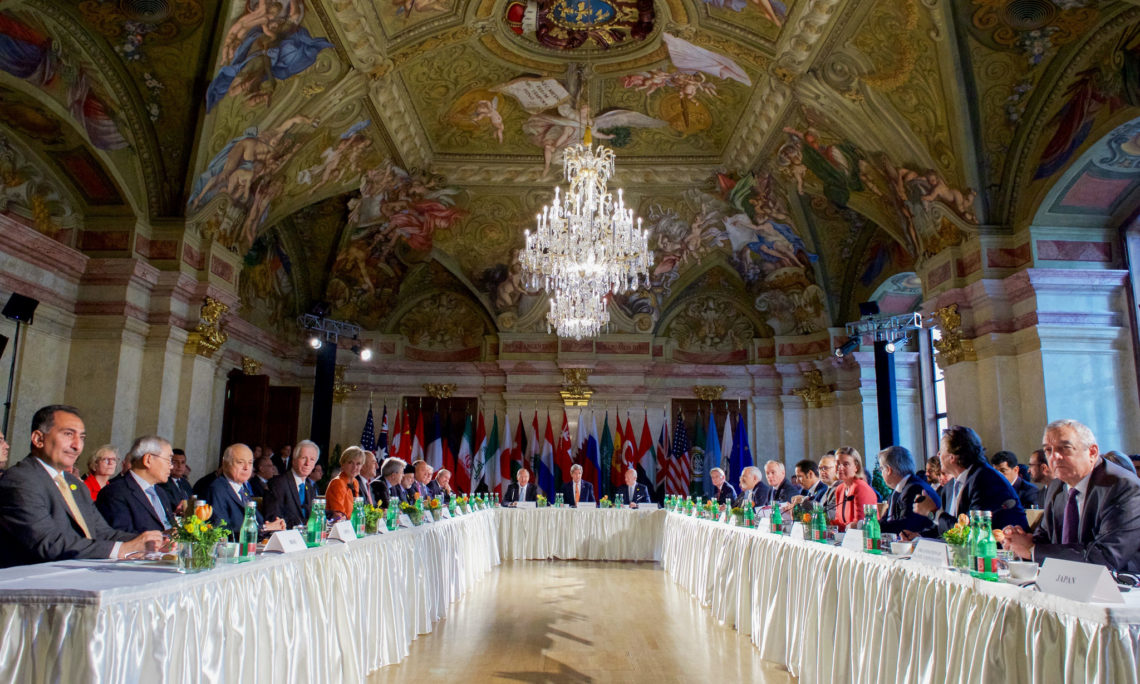 U.S. Secretary of State John Kerry sits between Russian Foreign Minister Sergey Lavrov and United Nations Special Envoy for Syria Staffan de Mistura on May 17, 2016, at the Palais Niederosterreich Hotel in Vienna, Austria, at the outset of a meeting of the International Syria Support Group. [State D

Meeting in Vienna on May 17, 2016, as the International Syria Support Group (ISSG), the Arab League, Australia, Canada, China, Egypt, the European Union, France, Germany, Iran, Iraq, Italy, Japan, Jordan, Lebanon, The Netherlands, the Organization of Islamic Cooperation, Oman, Qatar, Russia, Saudi Arabia, Spain, Turkey, the United Arab Emirates, the United Kingdom, the United Nations, and the United States reaffirmed the ISSG’s determination to strengthen the Cessation of Hostilities, to ensure full and sustained humanitarian access in Syria, and to ensure progress toward a peaceful political transition.

Members, emphasizing the importance of a full cessation of hostilities to decreasing violence and saving lives, stressed the need to solidify the cessation in the face of serious threats, particularly during the past several weeks. The members welcomed the Joint Statement of May 9 by Ceasefire Task Force Co-Chairs, the Russian Federation and the United States, recommitting them to intensify efforts to ensure the cessation’s nationwide implementation. In this regard, they welcomed the ongoing work of the Task Force and other mechanisms to facilitate solidifying of the cessation such as the UN Operations Center and Russian-U.S. Coordination Cell in Geneva.

Noting previous calls by the ISSG and the unanimously-adopted UNSCR 2254 of December 18, 2015, the ISSG reiterated its condemnation of the indiscriminate attacks by any party to the conflict. The ISSG expressed its serious concern about growing civilian casualties in recent weeks, making clear that the attacks on civilians, including attacks on medical facilities, by any party, is completely unacceptable. The ISSG took note of the March 2016 commitment by the Syrian government not to engage in indiscriminate use of force and urged the fulfillment of that commitment. The ISSG committed to intensifying its efforts to get the parties to stop any further indiscriminate use of force, and welcomed the Russian Federation’s commitment in the Joint Statement of May 9 to “work with the Syrian authorities to minimize aviation operations over areas predominantly inhabited by civilians or parties to the cessation, as well as the United States’ commitment to intensifying its support and assistance to regional allies to help them prevent the flow of fighters, weapons, or financial support to terrorist organizations across their borders.”

The ISSG, noting that Da’esh and the Nusra Front are designated by the UN Security Council as terrorist organizations, urged that the international community do all it can to prevent any material or financial support from reaching these groups and dissuade any party to the cessation from fighting in collaboration with them. The ISSG supports efforts by the co-chairs of the Ceasefire Task Force to develop a shared understanding of the threat posed, and delineation of the territory controlled, by Da’esh and the Nusra Front, and to consider ways to deal decisively with the threat posed by Da’esh and the Nusra Front to Syria and international security. The ISSG stressed that in taking action against these two groups, the parties should avoid any attacks on parties to the cessation and any attacks on civilians, in accordance with the commitments contained in the February 22 Joint Statement of the Russian Federation and the United States.

The ISSG also pledged support for seeking to transform the cessation into a more comprehensive nationwide ceasefire in parallel with progress in negotiations for a political transition between the Syrian parties consistent with the Geneva Communique of June 2012, relevant UNSC Resolutions and ISSG decisions.

Since the ISSG’s last meeting, the UN, in coordination with the International Committee of the Red Cross (ICRC) and Syrian Arab Red Crescent, has delivered assistance to 255,000 people in besieged areas and 473,000 people in hard-to-reach areas. However, the Syrian government has yet to permit access to many locations including a number of besieged communities in Rural Damascus, in contravention of the Munich Statement. UN assessment teams, life-saving assistance, including medical supplies and personnel to ensure their proper use, have been denied to populations in need. Although some urgent medical evacuations have taken place, many cases have been delayed or denied.

The members of the ISSG reaffirmed that sieges of civilian populations in Syria are a violation of International Humanitarian Law and called for the immediate lifting of all sieges. The ISSG committed to use its influence with all parties on the ground and in coordination with the United Nations to ensure immediate, unimpeded and sustained humanitarian access throughout Syria, and allow humanitarian assistance to reach all people in need, particularly in all besieged and hard-to-reach areas, as defined by the UN and called for in UNSCR 2254. As called for in UNSCR 2258, border crossings that are necessary for humanitarian relief should remain open.

The ISSG insisted on concrete steps to enable the provision of urgent humanitarian deliveries to the following locations: Arbeen, Darraya, Douma, East Harasta, Mouadhimiyeh, Zabadin and Zamalka. Regular humanitarian deliveries must continue, according to the UN’s monthly plans, to all other besieged and hard to reach locations, including Fouah, Kefraya, Kafr Batna, Ein Terma, Hammura, Jisrein, Madaya, Zabadani, Yarmouk. Starting June 1, if the UN is denied humanitarian access to any of the designated besieged areas, the ISSG calls on the World Food Program to immediately carry out a program for air bridges and air drops for all areas in need. The ISSG pledges to support such a program, and also calls on all parties to the cessation of hostilities to provide a secure environment for that program. Air deliveries should also continue to Dayr al-Zour. The ISSG stressed that such access, as in other areas, must be continuous for as long as humanitarian needs persist. Humanitarian access to these most urgent areas will be a first step toward full, sustained, and unimpeded access throughout the country.

The Members of the ISSG look forward to seeing the UN’s June plan for priority humanitarian deliveries and urge the government to approve it swiftly and in its entirety to make up for lost time. All ISSG members commit to work together immediately with the Syrian parties to ensure no delay in the granting of approval and completion of all UN requests for access consistent with UNSCR 2254, paragraph 12.

The ISSG reaffirmed that humanitarian access should not benefit any particular group over any other, but must be granted by all sides to all people in need, in full compliance with UNSCR 2254. Humanitarian aid is to be delivered based on need, for the number of beneficiaries specified by the UN, with the full package of food, medical, surgical, water, sanitation, non-food items, and any other urgently required goods as determined by the UN. The provision of mobile health services and evacuation of urgent medical cases should be facilitated by all sides based solely on urgency and need.

The ISSG asked the UN to report weekly, on behalf of the Task Force, on progress on the implementation of the plan referenced above, so that in any cases where access lags or approvals are lacking, relevant ISSG members could use their influence to press the requested party or parties to provide that approval and access. The ISSG further decided that in cases where humanitarian access is systematically denied, either fully or by the denial of delivery of certain categories of humanitarian aid or disagreements over the number of beneficiaries, the ISSG, with the agreement of the co-chairs, caninform the Security Council through the UN Special Envoy for Syria.

ISSG co-chairs and participants pledged to ensure that humanitarian aid convoys are used solely for humanitarian purposes. International humanitarian organizations, in particular the United Nations, will play the central role, as they engage the Syrian government, Syrian Arab Red Crescent, the opposition and local populations, in arranging the monitoring and sustained and uninterrupted distribution of aid.

We encourage the international community and the UN to intensify efforts to meet the needs of internally displaced persons across Syria, without losing sight of the imperative of building conditions for the safe return of the refugees, including during the transition, in accordance with all norms of international humanitarian law and taking into account the interests of the host countries.

The ISSG reiterated the objective of meeting the target date established by UNSCR 2254 of August 1 for the parties to reach agreement on a framework for a genuine political transition, which would include a broad, inclusive, non-sectarian transitional governing body with full executive powers. In this regard, they welcomed the “Mediator’s Summary” issued after the third round of intra-Syrian talks on April 27 by UN Special Envoy Staffan de Mistura, and endorsed in particular the “Commonalities on Political Transition” noted within the report as well as the “Fundamental Issues For a Viable Transition” contained in Annex 1 of the report that may serve as the basis for the next round of the intra-Syrian negotiations. The ISSG notes that the parties have accepted a political transition will be overseen by a transitional governing body formed on the basis of mutual consent and vested with full executive powers, to ensure continuity of governmental institutions, in accordance with UNSCR 2254. On the basis of the Geneva Communique, the ISSG urged the parties to engage constructively with the UN Special Envoy in addressing the fundamental issues for a transition, as set out by the Special Envoy. ISSG Members believe that the parties should return to negotiations on that basis at an appropriate time.

All ISSG members reaffirmed that political transition in Syria must be Syrian-owned and Syrian-led, and expressed their unequivocal and united commitment to facilitating the start of political transition in Syria consistent with resolution 2254 (2015) and previous ISSG statements of October 30 and November 14, 2015, and February 11, 2016. The ISSG also requests UN Special Envoy for Syria de Mistura to facilitate agreements between the Syrian parties for the release of detainees. The ISSG called upon any party holding detainees to protect the health and safety of those in their custody.