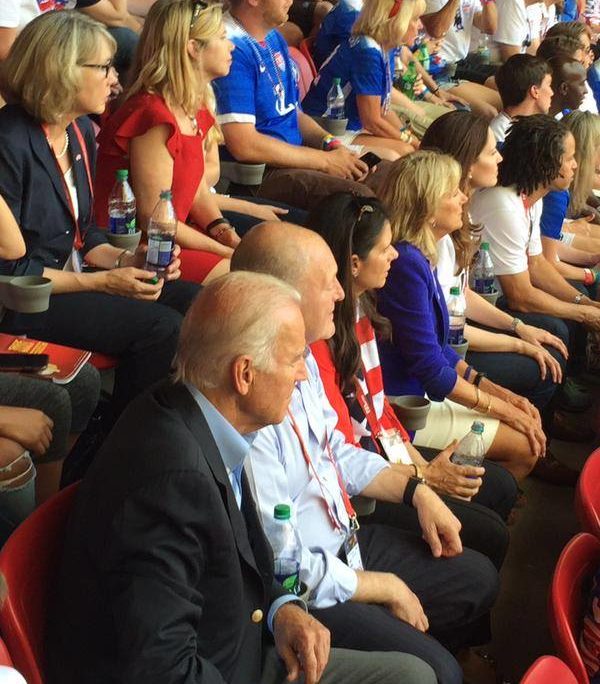 Ambassador Heyman attending the FIFA Women's World Cup Final in Vancouver with Vice-President Joe Biden, Dr. Jill Biden and other members of the official US delegation.

“As Ambassador of the United States of America to Canada, I want to extend my deep appreciation and hearty congratulations for the amazing hospitality Canada extended to athletes and spectators around the world during the FIFA Women’s World Cup Tournament. I was fortunate enough to attend some of the games, including the breathtaking championship match. Professionalism, careful planning, and a spirit of friendship were the hallmarks of every event our Canadian hosts offered before, during, and after the games.

“The FIFA Women’s World Cup Canada 2015 National Organising Committee laid out a set of ambitious objectives before the tournament: To host the most successful FIFA Women’s World Cup in history; to conduct the first major sporting event hosted domestically, from coast to coast, across five time zones, simultaneously; to bring one world event to six cities, as well as fans all around the world; and to leave a legacy for sport, for women, and for Canada. By every measure, the tournament met and exceeded those objectives. The 52 matches over four weeks in Vancouver, Edmonton, Winnipeg, Ottawa, Montreal, and Moncton united soccer enthusiasts in celebrating the best of what sport represents: Teamwork, fair play, passion, and dedication. The official slogan of the tournament, “To a Greater Goal(Vers le Grand But),” encapsulates not only what the competing teams achieved but also the unity of purpose and commitment to excellence of all who brought the tournament to reality. Congratulations to the athletes who gave their best on the field of play, to the organizers, and to those who worked behind the scenes contributing their part to this great success.”