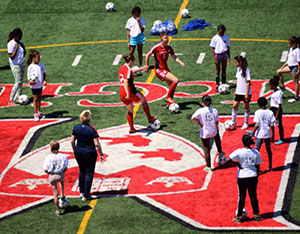 During the Department of State’s first-ever Sports Diplomacy program in Canada, Mary Harvey, the starting goalie for the 1991 inaugural FIFA Women’s World Cup winning U.S. Women’s National Team and a member of the 1996 U.S. Olympic Gold Medal team, spent a busy day in Montreal. She met with community sport organizers to share best practices for sports development, led a soccer clinic for 30 young girls from underserved communities, and attended the exhilarating Germany vs. France quarterfinal 2015 FIFA Women’s World Cup match with a few of them.

The girls who participated in the soccer clinic with Mary worked up quite an appetite after a full afternoon on the field and refueled with an American-style BBQ. During the meal, they got to know McGill varsity soccer players Hannah Kirby and Anaïs Robert, who assisted with the clinic, as well as the Mary and Consul General Nina Maria Fite. The day’s activities highlighted the ability of sports to transcend linguistic and cultural barriers, and participants went home with the equipment and motivation needed to carry forward those concepts in their communities.

The Consulate would like to thank all the participants and chaperones from Tyndale St-Georges Community Center and the Centre Communautaire de Loisir de la Côte-Des-Neiges for their enthusiasm and participation, as well as Mary Harvey and McGill Athletics for their help in organizing the day. For more photos, please visit our Flickr page.