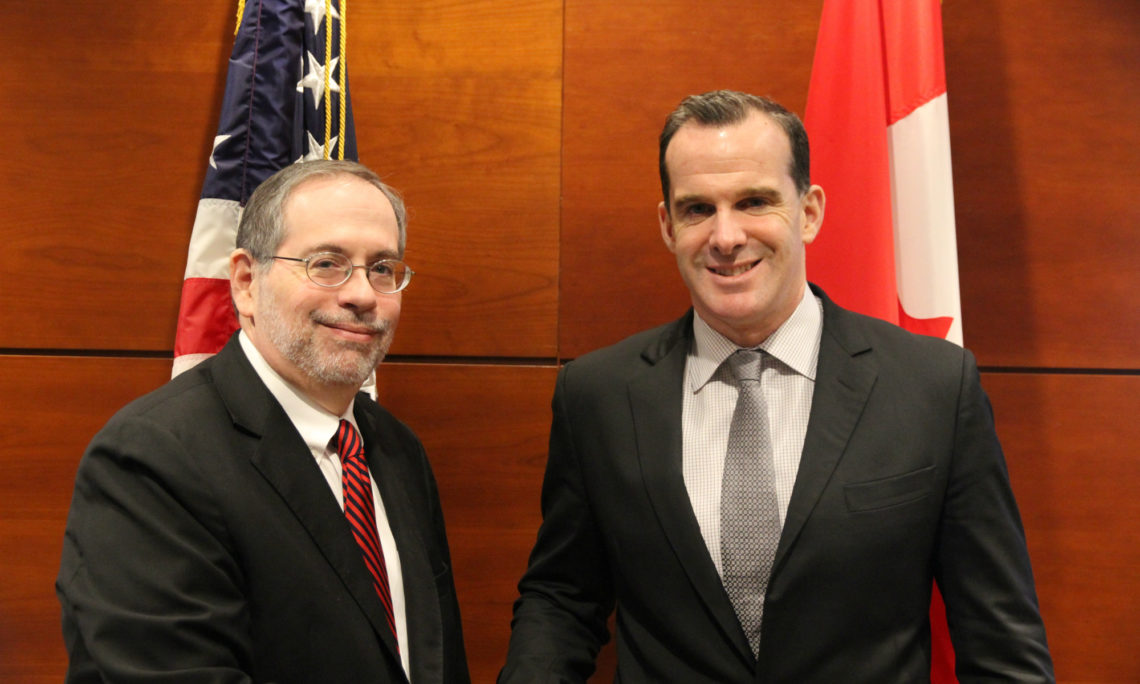 U.S. Special Presidential Envoy Brett McGurk today visited Canada at the invitation of Canadian Minister of National Defence Harjit Sajjan. In meetings with the Minister and other senior Canadian government officials, Mr. McGurk expressed the United States’ appreciation for Canada’s important and ongoing contributions as a member of the Global Coalition to Counter ISIL/Da’esh. He also discussed how we can work together as a Coalition to increase pressure on Da’esh at its core in Iraq and Syria and what more we can do as a Coalition to coordinate our efforts to pressure Da’esh across its global network. Mr. McGurk also provided a readout of the plenary meeting on November 23 in Washington where senior diplomatic representatives from the 65-member strong Global Coalition gathered and expressed their unity and determination to end the scourge that Da’esh has brought to Iraq and Syria and the larger global community.

Brett McGurk serves as Special Presidential Envoy for the Global Coalition to Counter ISIL/Da’esh and as Deputy Assistant Secretary for Iraq and Iran in the Bureau of Near Eastern Affairs at the U.S. Department of State. He was Deputy Special Presidential Envoy from September 13, 2014 until November 12, 2015. His previous assignment was Senior Advisor in the Bureau of Near Eastern Affairs with a focus on Iraq and other regional initiatives. In the Obama administration McGurk has served as a special advisor to the National Security Staff and as Senior Advisor to Ambassadors Ryan Crocker, Christopher Hill, and James Jeffrey in Baghdad. In these capacities McGurk participated in President Obama’s 2009 review of Iraq policy and helped manage the transition from military to civilian lead following the U.S. military drawdown. During the Bush administration McGurk served as Director for Iraq and then as Special Assistant to the President and Senior Director for Iraq and Afghanistan.

In 2008 McGurk served as a lead negotiator and coordinator during bilateral talks with the Iraqi Government on both a long-term Strategic Framework Agreement and a Security Agreement to govern the temporary presence of U.S. forces and the normalization of bilateral relations between Iraq and the United States. For these assignments he received the State Department’s Distinguished Honor and Superior Honor Awards. He was also one of the chief architects with President Bush of the strategy known as “the Surge,” which contributed to a reduction of violence in Iraq and set the conditions for the responsible withdrawal of U.S. forces. McGurk had earlier served as a legal advisor to the Coalition Provisional Authority and then the U.S. Embassy in Baghdad under Ambassador John Negroponte.

McGurk is a graduate of Columbia University School of Law, where served as Senior Editor of the Columbia Law Review. After law school, he served as a law clerk to the late Chief Justice William H. Rehnquist on the Supreme Court of the United States, Judge Denis Jacobs on the U.S. Court of Appeals for the 2d Circuit, and Judge Gerard E. Lynch, on the U.S. District Court for the Southern District of New York. He holds a B.A. in political science with honors, Phi Beta Kappa, from the University of Connecticut. Follow McGurk at @brett_mcgurk on Twitter.