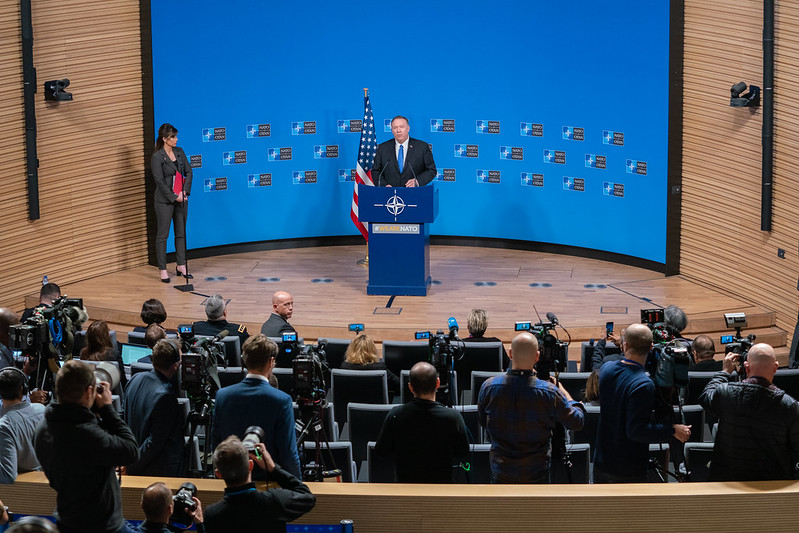 SECRETARY POMPEO:  Good evening, everyone.  It’s great to be back in Brussels.  Let me, first of all, thank my NATO colleagues who each expressed their condolences for the loss of the two American soldiers in Afghanistan.  I want to thank the – all of them for doing that, and I want to express my personal condolences to their families as well.

It’s great to be back here, too.  I want to acknowledge the great news also – the great news that Mr. Kevin King, an American held hostage in Afghanistan for more than three years, was released yesterday and will soon be reunited with his family.  It’s good news, too, for our Australian friends who were able to get home one of their own, also.

We had a good day.  We were hard at work here in Brussels.  Everything we have done has set a positive tone for the leaders’ meeting in London next month.  President Trump and I look forward to being there.

I had a unique opportunity, too, to reflect on the importance of the NATO alliance in Berlin earlier this month.  I was with my counterpart, Heiko, from Germany.  We had a great time.  He was a wonderful, gracious host.  We celebrated the 30th anniversary of the fall of the Berlin Wall, a place that I had served when I was a young soldier.  We, all of us, won the Cold War together, allied partners protecting freedom, preserving freedom, creating freedom in places that had far too little.  It was indeed a victory for free societies over authoritarianism.

Thirty years later, we again face threats from authoritarian regimes, and again we must face them together.  Russia, China, Iran – their value systems are simply very different from ours.  They go in an opposite direction.  Add the threats that we have from terror around the world, radical Islamic extremism and cyber threats, and indeed, our work remains.  Every ally has the responsibility, the duty to confront them, and we’re happy with the progress that has been made towards fulfilling the 2018 Brussels Summit commitments.  We give our allies full credit for committing to add 100 billion in new defense spending by the end of the year 2020.  It’s the first step in our collective security.

Security for our people means each country that made the promise to get to 2 percent of GDP must do so, and we need modern capabilities like next-generation fighter aircraft, heavier infantry, improved intelligence assets, all of the things that these resources can bring to our collective security.

Security for our people means welcoming North Macedonia as well.  I had the chance to go there last month.  As our 30th NATO ally, the United States Senate approved the accession protocol on North Macedonia in October, on the 22nd, and we look forward to it officially joining our alliance.

Strengthening this alliance has never been easy and there have always been challenges.  The unity has always been there, but we’ve confronted differences head on.  There are places we need to catch up.  Certainly with respect to counterterrorism, there’s work to do.  We made progress by updating the NATO counterterrorism action plan, and the contributions that NATO has made to the counter-ISIS global coalition, which met in Washington last week.  We need to keep up this good work to protect our people.

Finally, our alliance must address the current and potential long-term threat posed by the Chinese Communist Party.  Seventy years ago, the founding nations of NATO came together for the cause of freedom and democracy.  We cannot ignore the fundamental differences and beliefs in the – between our countries and those of the Chinese Communist Party.  NATO is indeed the most critical strategic partnership in recorded history.  The United States led the formation of this alliance, and we are returning our robust leadership today.  We’re committed to working with our NATO partners to build a strong, stable, prosperous alliance, a free Europe, and a free world that benefits all of our people.

I want to thank Secretary General Stoltenberg for all the work he did to put this ministerial together.  Happy to take a question or two.

QUESTION:  Thank you, Mr. Secretary.  My question is on arms control because I know that that’s something that’s of interest in the upcoming meeting with NATO as they discuss strategic issues especially related to Russia.

SECRETARY POMPEO:  So when I became Secretary of State, in front of us was the INF Treaty.  We did what the Trump administration always does.  We looked at reality.  We recognized the facts.  The facts had changed.  We had two parties to a treaty, only one of which was complying with that treaty.  It made no sense to stay in it.  And we worked with our European partners to make sure that there was unanimity, that we understood the risks, that we understood the costs, and then moved forward together, declaring that Russia was in violation and that the appropriate thing to do was for the United States to leave that treaty.  That goes for a broader set of arms control issues.  President Trump will never allow America to enter into any arms control agreement that doesn’t make sense for the United States of America or to renew any existing arms control agreement that expires if it no longer makes sense for America.

So with that – with that as the central core principle, we – the President has spoken deeply about how the world has changed since New START was originally created.  We now have an expanded threat from the Chinese Communist Party.  The President’s made clear that any time we begin to have a conversation about how to create a strategic – a strategic structure that secures America, it’s no longer the case that it can only be the United States and Russia.  And so we will – we will work to make sure that as we move these conversations forward, these dialogues about what’s the right way to ensure American national security, whether that’s in arms control or, frankly, for that matter, in any other space, we will have the protection of the American people and the stability for the free peoples of the world foremost front and center in how we think about that problem set.

SECRETARY POMPEO:  There you go.

MS ORTAGUS:  Is that you?

SECRETARY POMPEO:  No, but you’re going to take a shot at it, anyway.

MS ORTAGUS:  What about Damon Wake from AFP?  Are you here?  There you go.

QUESTION:  Yeah, hello.  It’s Damon Wake from AFP.  I’m behind this camera, but don’t worry.  I wanted to ask first what your analysis or assessment is of the proposals made by France and Germany for committees of reflection on NATO’s political strategy for the future.

And secondly, on a domestic question, how do you respond to Ambassador Sondland’s evidence today that you directed him to coordinate Ukraine policy with the President’s lawyer, Rudy Giuliani?

SECRETARY POMPEO:  The second one’s easy: I didn’t see a single thing today.  I was working.  It sounds like you might not have been.  I was in meetings all day and haven’t had a chance to see any of that testimony.

With respect to the proposals, I said – goodness, it’s been almost a year and a half since I was first Secretary of State and would have repeated back in Brussels it is always the case that every institution, every structure that’s been created should constantly be – be evaluated against whether it’s fit for purpose.  Is it achieving its ends?  Is it delivering against the objectives that were originally set out or those objectives that were put in place as either the charter was amended or strategic objectives were amended?  That certainly goes for NATO as well.

I don’t know if this is precisely the right moment or if this is the right format.  We’ll all think about that, but it is eminently reasonable to continue to make sure that alliances that are put together – this critical alliance that is NATO – that it’s right, that it’s structured properly, that burden-sharing is aligned in the right way, that its objectives as these things change – right, when it was created, counterterrorism wasn’t a part of what it did.  Today we have the threat from the Chinese Communist Party; that wasn’t something that NATO was thinking about 70 years ago at its founding.

It is, in my judgment, always appropriate to be constantly ensuring that we are – we are using all of our resources, resources that come from American taxpayers or taxpayers from our NATO allies, that we’re using those in the ways that prioritize the risks and deliver good and effective outcomes.

QUESTION:  Mr. Secretary, Ambassador Sondland testified today in Washington that there was a clear quid pro quo over Ukraine, and that everyone was in the loop, including you.  Is that true?  And do you think you should consider recusing yourself from decisions involving documents provided to Congress on Ukraine?  Thank you, sir.

SECRETARY POMPEO:  Yeah, I didn’t see – I didn’t see the testimony.  I’m not going to recuse myself from this.  I know precisely what American policy was with respect to Ukraine.  I was working on it and I’m incredibly proud of what we’ve accomplished.

We delivered remarkable outcomes for the Ukrainian people, and I hope that we’re able to continue to do so.  We got them the defensive systems they needed.  We got them the resources.  The previous administration refused to do that.  And I’m proud – I’m proud that President Trump led that effort to get our policy on Ukraine right.  We not only planned for it, we not only laid out a plan forward, but we executed and delivered on it.  We’ll continue to do that.

Our focus at the State Department is on making sure that we get our policy right, execute it flawlessly, and deliver security on behalf of the American people.  We’ve done it for my first year and a half.  I intend to do it every single day, and I’m counting on my team to remain focused on that as well.