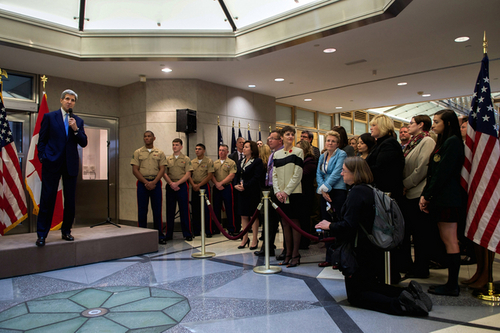 SECRETARY KERRY: Thank you all very much for a wonderful welcome. I am really happy to be here, and despite the fact that it’s taken me longer than I wanted to to be able to get up here, I’m proud to say that John Baird was the first person I received in Washington as Secretary, one of my first three phone calls the day I got sworn in, and I don’t think anybody doubts — we had been meeting everywhere in the world except here, so it’s finally appropriate that I got here, though I’m sorry about the circumstances, obviously.

Thank you all for being here. Thanks for what you do. And I know that the last week was pretty jarring to everybody, being on lockdown. I want to thank the Marines, I want to thank the RSO, I want to thank the Royal Canadian Mounted Police and others, all of whom gave people a sense of confidence during the events of last week, which bring home to all of us why we’re here and what we’re doing and why this work is really so important.

We’re living in an incredibly challenging time. It’s almost cliched now to sort of say that, because it doesn’t fully bring home to people the full measure of challenge that we all face. I’m sure some of you have served in Kabul or Baghdad, and the last thing you expected was to come to Ottawa, know that there were gunshots in the streets and that the parliament was potentially under siege and certainly assaulted by one individual with weapons. That brings home to us that this is a different kind of challenge. This — the challenge of our generation is going to be to deal with religious radical extremism, which exploits a legitimate and beautiful religion that is being totally distorted, has nothing to do with what they purport to be pursuing, and nevertheless captures the minds of some of our young people, even in America. We have over a hundred people who’ve gone over there to fight with ISIL. Several hundred from France, from Germany, from Britain, from Holland, from the Netherlands, from Australia — run around the world.

And so we have to push back. We’re not going to win this exclusively through our efforts on the ground in this coalition with kinetic efforts. We’re going to win this with ideas. And we’re also going to win it with better alternatives for a whole bunch of young people who today live in places where they feel oppressed, where they don’t have a lot of opportunity, there’s not enough education, they don’t have jobs, but they know what the rest of the world has because they all have smart phones, they all have mobile devices, and they’re all seeing what’s going on and they trade thoughts. And frankly, there have been years and years of anger and frustration building up for a whole lot of different reasons in South Central Asia, Middle East, Horn of Africa, Sub-Saharan Africa, and different places.

So our challenge is to not make them think that modernity and rule of law and civil society and states that have long existed is somehow the enemy. And what we have to do is take our values and our principles out there as never before, in hard work and now sometimes dangerous work. And what’s critical is we’re near a country that could not be a better partner to us. We’re very lucky. Nobody gets to choose their neighbors, but we have neighbors that are in sync and very much committed and sharing the same set of values, which is not true of everybody everywhere else in the world.

Anyway, keep doing what you’re doing, because this is a long haul. We have a lot of miles to go, so to speak, and it could get harder before it gets easier in some ways in certain parts of this journey. So I ask all of you — Foreign Service, Civil Service, agency appointees, United States Marine Corps — all of you stay at it. We need you. We are profoundly grateful for the fact that you’re here. But I’ll tell you something: We’re the lucky ones, because a lot of people cannot get up in the morning and go to work and feel as rewarded and make as much difference in people’s lives and have as much impact on a course of history as everybody here gets to do.

So you are the lucky ones in many, many ways. And on behalf of the President, myself, and the people of the United States of America, I thank everybody who’s involved in this great enterprise. It’s a privilege to be with you. Thank you. (Applause.)