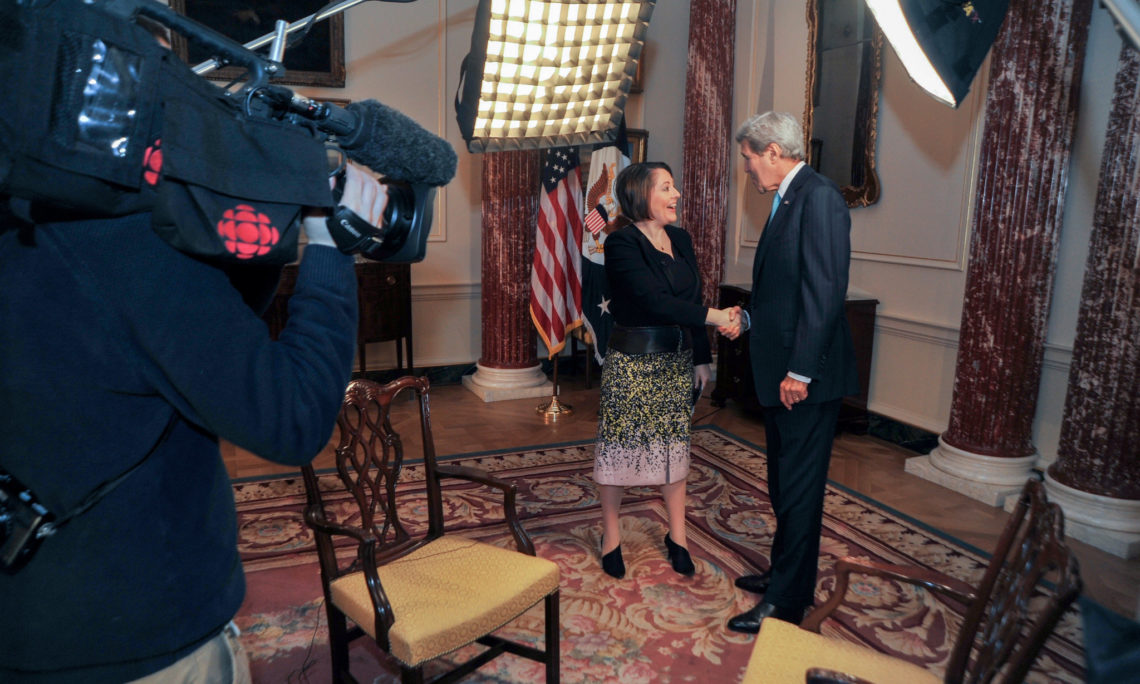 QUESTION: All right. Thank you for making time, Secretary Kerry. Appreciate it.

SECRETARY KERRY: Happy to be with you. Thank you.

QUESTION: Let’s start on an issue that took up a lot of time with the previous government, dare I say the words Keystone —

QUESTION: — something that your department rejected, had lots of problems with. And you described oil in Canada as dirty oil. Do you think that Canada should continue to exploit the oil sands and try and sell that oil? Is it worth it at this stage given what we’re trying to do with climate change?

SECRETARY KERRY: Well, notwithstanding what we’re going to – what we’re trying to do with climate change, which is critical and more critical – I think just yesterday, it was announced this winter is the warmest recorded winter in history. I mean, we keep hearing this: Every month is warmer than the last month, every winter is warmer than the last winter. So people need to heed the warning signs, and the reality is we will be pumping oil and gas for some years to come, but all of us, every country, needs to move as rapidly as feasible economically and otherwise, technologically, to a low-carbon footprint, a low-carbon energy sourcing.

And so President Obama has been very, very clear about America’s priority with a climate action plan to try to move in that direction. Canada likewise I know is trying to do its part. So Canada has to make its own decisions as to what the mix is going to be. But all of us have a responsibility to move towards alternative, renewable, low-carbon footprint, and literally save the planet from this devastating track that we’re on.

QUESTION: I know Keystone is over, but do you see a place in the future where there is a new North-South pipeline?

SECRETARY KERRY: Well, every pipeline we have said or any judgments about a sourcing the fuel will be done on its individual merits. Each one will be measured accordingly. But generically, I would just say that President Obama and I and all of our team agree that we have a huge responsibility as one of the major emissions – emitting countries of the world – we must do everything possible to move off of the high-carbon sources. And so we’re doing that. We’re doing that in many different ways, in many different sectors – not just choosing one sector to bear all the impact.

QUESTION: So a pipeline may not be worth that, really, in the long run?

SECRETARY KERRY: Well, that’s – again, it’s going to be on an individual basis. We have some 300 pipelines. It’s not as if we’re pipeline-less. And we are now exporting LNG, which nobody would have imagined a few years ago. So things change. Technologies particularly help to change things. And we need to push the technology curve. President Obama engaged in Paris with Prime Minister Modi and others in the Mission Innovation, which is trying to significantly increase our commitment to research and development so we can push those new technologies. And who knows? Maybe someone is going to come up with an absolute clean burn on coal or an absolute clean burn on oil. So I don’t think you can say never to anything, but you need to do it in accordance with what the science and best practices are telling us is appropriate.

QUESTION: Let me move on to the fight against ISIS, something that you’re obviously deeply involved with. We have changed our role in that fight and we are looking for – not only on the training capacity, but this government as well is looking for a way to do more diplomatically. What do you think Canada could offer in that region on a diplomatic front? How could we help the coalition from that perspective?

SECRETARY KERRY: Well, Canada already is helping the coalition, and we have great respect for Prime Minister Trudeau’s decision. He is going to continue – not just continue – he is augmenting Canada’s role in the counter-ISIL coalition. Canada was, I think, one of the very first countries to sign up to the coalition. Canada has made significant contributions and will continue to, now with the tripling of training and the increase in intelligence cooperation, as well as taking on efforts on the other fronts in that fight, which are countering the foreign terrorist fighters, countering the finance mechanisms, countering the flow of people, and helping to share information effectively, and also dealing with counter-messaging.

So Canada is deeply invested in this and we need that partnership. We’re very pleased that the prime minister while – and when he honored his campaign decision, his own policy decision with respect to bombing and flights. Nevertheless, Canada is making an enormous contribution in other ways that are very important, and we welcome that.

QUESTION: Well, some of the ways that they’re trying to do that is obviously through humanitarian aid and particularly the government’s decision to bring in 25,000 Syrian refugees into Canada very quickly. There was concern in this country about that given the speed we were doing that at and the security concerns around that. Did you have worries that we were perhaps taking too ambitious a goal and that the security might not go as you had hoped? Did you play any role in that?

SECRETARY KERRY: Well, I think it’s fair to say that all of the agencies concerned with providing for the security of the country and screening people wanted to make sure that the push to do 25,000 people wasn’t going to compromise anything. I think people feel confident that they worked out ways to guarantee.

I mean, the fact is that refugees coming in, not just to Canada but coming into the United States, go through an absolutely exhaustive background check, much more profound than normal travelers. And I think people feel quite confident that the cooperation level between Canada and the United States is what it is targeted to be. And obviously, everybody hopes that that’s going to be adequate to do the job. But I applaud Canada’s humanitarian gesture. I think it’s a very significant one. The United States has committed to take in about 10,000, I think, or so, and we’re trying to move to do that effectively. And we’ll take in more if we can as we go forward and gain confidence in the process that’s being applied to the security needs.

QUESTION: On Russia, this government as well has indicated a willingness to re-engage with Russia. And as someone that spends a lot of time talking to Russia, do you have any sort of advice to give them around how you do that without too much cynicism around how they operate?

SECRETARY KERRY: If you don’t mind, Rosemary, I think if I do have advice, it’s advice I’d rather give Stephane Dion or the prime minister on a personal level – at least first. But I think – I mean, Canada knows what it’s doing. We have great cooperation between us, and I’m confident that going forward we’re going to work very effectively at this.

QUESTION: Is it useful to re-engage with Russia? Is that a useful dialogue to leave open?

SECRETARY KERRY: Yeah, I think – we believe it’s important, but I mean, every country, again, has to make its own decision about its own security needs and its own policies. That said, President Obama believes and I believe that engagement is important. You don’t lose anything by asking the right questions, having the right conversation, and exploring what the possibilities may be. And as long as you’re saying – not saying yes to something that you didn’t intend to say yes to or don’t want to say yes to, no harm done. It seems to me that it’s important to explore some of those possibilities, but it shouldn’t be done in a way that is an invitation to abuse or invitation to a sense of impunity. So – and I’m confident that the prime minister will deliver an appropriate message in whatever engagement takes place.

QUESTION: I think you just gave advice there, if I’m not mistaken. (Laughter.)

QUESTION: Good. Last question. You are at the end of this Administration. We have a new government coming in and there’s many things where you align. Is there anything where you would like to see Canada sort of pick up the baton on work that you have started or that President Obama has started? What would – where would we be useful in sort of pushing things down the road as you —

SECRETARY KERRY: Well, I think we are very likeminded on so many things that there will be almost an automaticity to Canada continuing initiatives. I think that President Obama and Prime Minister Trudeau have an enormous amount in common, and I’m confident the visit here is going to be really excellent. I have no doubt about it. They share a lot of common vision about where the world needs to go, about what the challenges are. So I don’t think we need to be giving advice or encouraging. I have great confidence that Canada is going to lead, is going to be a significant contributor to the ongoing security challenges that we face on the world as a community of nations, and we look forward to working with this new administration very, very much.

QUESTION: Even though you’re on the way out? How does a new government prepare for that? (Laughter.)

SECRETARY KERRY: Well, look, I feel – I have one-quarter of our time in office left. That – I don’t look at it as I’m on my way out or the President’s on his way out. We’re doing a lot. We have a lot of stuff going on right now, and until we see this election in its final throes and get into the latter part of the fall, we’re not thinking in terms of on our way out.

QUESTION: Good. Well, it’s nice to chat with you today. Thank you very much, Secretary. I appreciate it. Thank you.

SECRETARY KERRY: Thank you. It’s my pleasure. Thank you so much. Thanks.