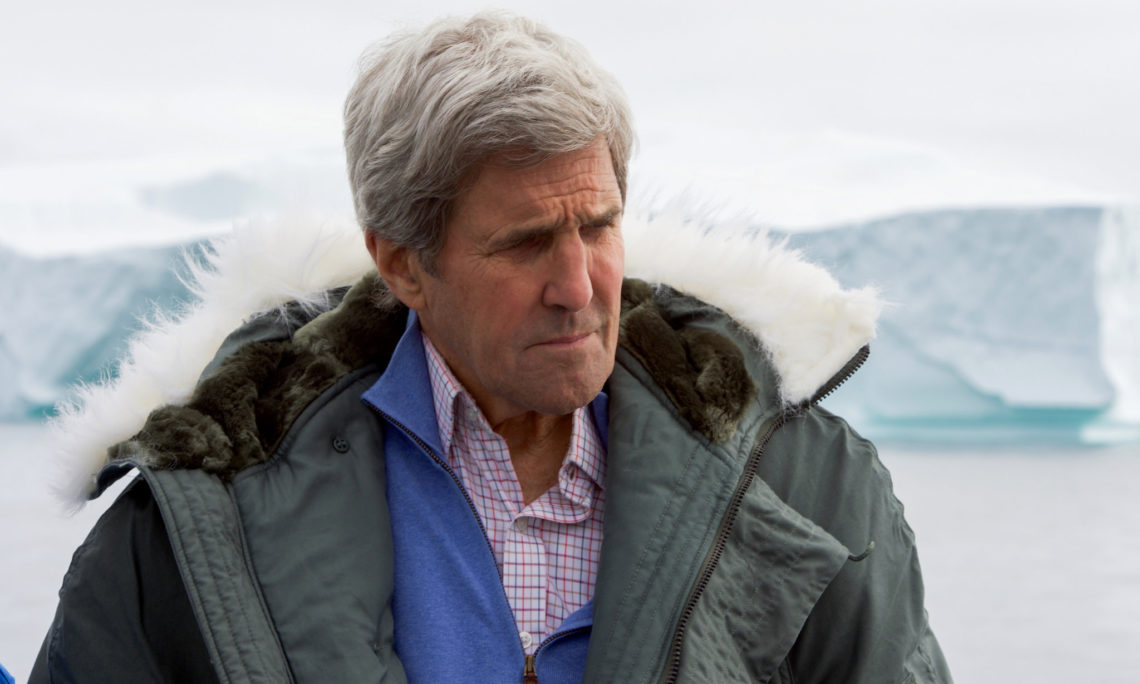 U.S. Secretary of State John Kerry listens as he receives a briefing from a group of climate change scientists on June 17, 2016, as they cruise aboard the HDMS Thetis in the waters off Ilulissat, Greenland, so he and Danish Foreign Minister Kristian Jensen could view an iceberg field created by the

The United States is very proud to be holding the chair now of the Arctic Council, and as the foreign minister said, we have a very ambitious program of trying to address black carbon and its impact on ice melt to affect the lives of indigenous population of the Arctic region and help improve them, and to deal with maritime safety and other issues that are being thrust at us because of the changes that are taking place in the region. The United States is an Arctic country along with Norway, Denmark and Russia, Canada. And we are all engaged with other Arctic participants in the Arctic Council in the effort to try to understand what is happening here.

There is profound change throughout the Arctic region. The permafrost is thawing in many places. Methane is being released as a consequence of that – not just on land, but even under the sea. You can light a match in some places in the ocean and it will inflame because of the bubbles of methane that are surfacing. We learned today about the impact of ocean current on this. So we know there are combined forces that are having this impact.

But we also know that human beings, by the choices we are making to provide our power, our energy, are having a profound negative impact through massive amounts of carbon dioxide, a third of which gets stored in the ocean but which is now having an impact on the changes of the ocean. There is a 10-times-greater acidification impact on the ocean today than there was 50 million years ago, and we know how to measure that. We can measure it through ice cores and through many other means of determining the history of the ocean.

So out of this particular ice fjord, the most active ice flow in the Northern Hemisphere there’s 86 million metric tons of ice each day flowing out into the ice flow, breaking off. I was told coming in here by the pilot of our airplane, who has lived here all his life, that there is enough water being emptied off the ice flow into the Arctic that it would take care of the city – and each day, there is enough water that would take care of the city of New York for an entire year. So this is gigantic transformation taking place and you can see it in the naked eye as you see where the ice has retreated from just in the last 15, 20 years, where the marks are still left.

So what we did in Paris with the Paris accord on global climate change is critical now to be implemented, but it’s not even enough. We have to all move faster in order to embrace new energy policies that are sustainable, that are clean, alternative – all of which are there for the using if governments and private sector make the right choices.

So I wanted to come up here today to both underscore the urgency but also to learn – and I did learn. I learned more about the threat of the Antarctic, which in many ways is far greater than the threat of the ice melt here in Greenland, what I’ve learned today – and an area where we don’t know enough, where we need to do more research, and where we need to respond to greater effect.

So this has been a significant eye-opener for me and I’ve spent 25 years or more engaged in this issue. There’s always more to learn. And we also learn the things we don’t know – and there’s a lot we don’t know that we still need to continue to research and work at. So I thank all those scientists, all those folks who dedicate their lives to helping us to understand that. We saw many of them who live up in Svalbard at 79 degrees Latitude where they are trying to figure out the answers for all of us who have to make policy. But there’s no mistaking that we are contributing to climate change – we human beings – and we have choices that can undo the damage that is being done or reduce – at least mitigate the worst effects so that we can preserve life as we know it and want it to be on this planet. So I’m very grateful to everybody who helped to make this happen and look forward to continuing to work with them and others to make something happen.