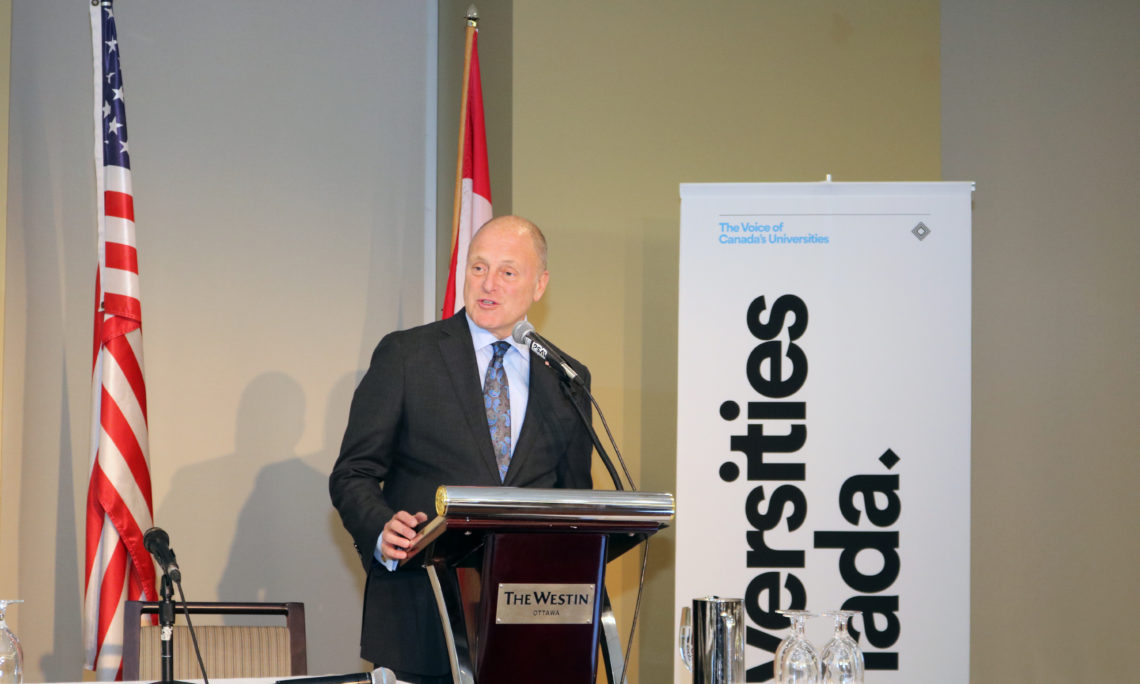 Welcome everyone, and thanks to Paul, the Universities Canada staff, and the university presidents and other representatives who are here today.  In one way or another, all of us are in the business of what Secretary of State Kerry calls education diplomacy.  We have the privilege of helping to drive the cross-fertilization of ideas and building the partnerships to define what the rest of the 21st century will look like.

We know that talented students have opportunities all around the world.  But we want students in the Western Hemisphere to think about where they live, and where they will build their future.  In 2011, President Obama launched the 100,000 Strong in the Americas initiative.  He set a goal of having 100,000 Americans studying in other Western Hemisphere countries and 100,000 students from the Hemisphere on American campuses each year.  The idea is simple but powerful:  As President Obama said, “When we study together, we learn together, we work together, and we prosper together.”

When I talk about the United States and Canada in just about any context – whether it’s our trade and economic relationship; our shared priorities to the environment and mitigate climate change; our robust energy relationship; our cultural ties; our multilateral cooperation to confront pressing global issues; or our coordination along our shared border – the central idea is this:  We are in a relationship where opportunities outweigh challenges.

The same principle applies to our academic communities. Our professors, researchers, and students on both sides of the border are working on issues that matter profoundly, and immediately, to both countries.  We have similar academic structures, similar academic calendars, and a free flow of the ideas that our best thinkers and innovators can generate.  We have every reason to stay closely linked.  Together, our countries are and must continue to be a global center for dynamic action.

And I believe every one of those students has a life-changing experience.  They come back home with a better understanding of American thought and values, seeing where Canadian thinking is both alike and different.  The schools that host the students benefit with more diverse perspectives in their classrooms, pushing American classmates to think beyond their own borders about the role and prospects of North America in the world.

It’s just as important for American students to come to Canada – to get the Canadian perspective, and to look at our future through a wider North American lens.  You’ll see in the “Heading North” report that there are fewer U.S. students in Canada than Canadian students in the United States.  We want to re-balance that equation.

That’s what the U.S. Embassy’s cooperation with Universities Canada on this project is all about.  We set out to look deeper than anecdotes and assumptions.  We wanted to know why American students set their sights north of the border for higher education; what their experience was like applying to study, arriving on campus, and moving through their academic program; and how Canadian universities support the American students they host.  We also looked at the role American alumni of Canadian schools can play in spreading the word south of the border about what a rich and memorable experience a Canadian education can offer.

I hope that every Universities Canada member institution, and every advocate of Canada’s system of higher education, will take a close look at “Heading north:  The experience of American students at Canadian universities.”  It’s exciting to think that the ideas, best practices, and policy recommendations in the report will lead to even more American students bringing their talents and energy to Canadian campuses.  I, for one, can’t wait to see what they will accomplish.

It’s been a pleasure to work with Universities Canada on this project.  When we set out to look at how we can encourage more U.S. study in Canada, we knew that UC would be the ideal partner.  I hope this report will launch an ongoing conversation among Canadian universities, UC, and the U.S. Mission to Canada so we can keep finding new ways to strengthen our academic ties.