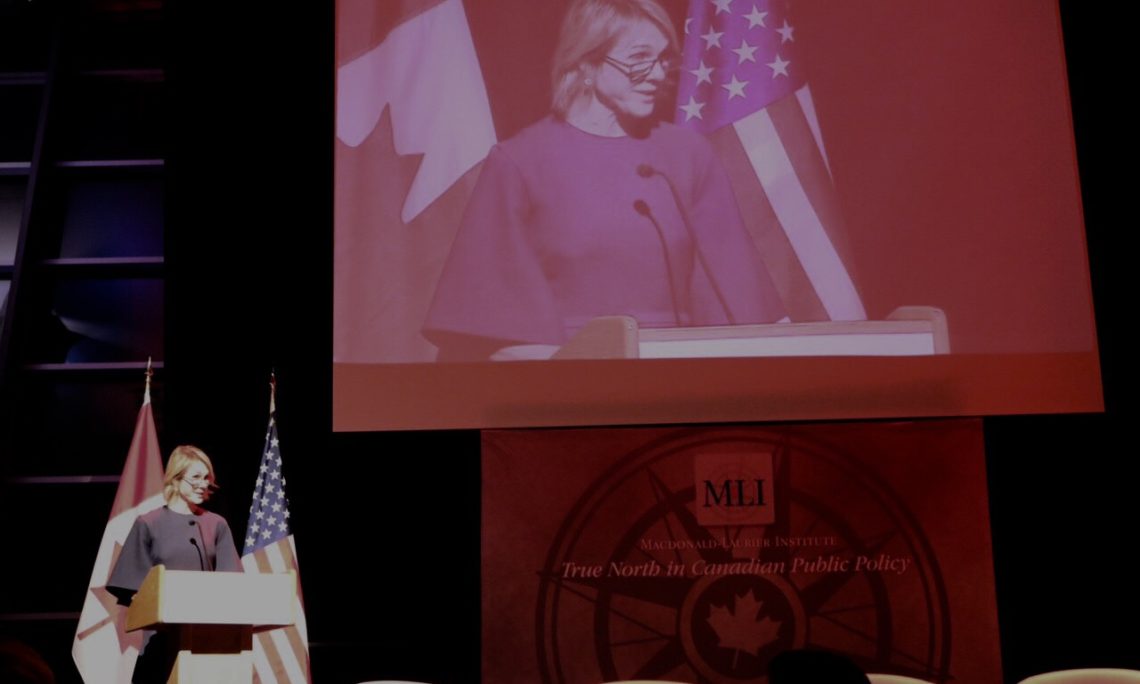 at the Macdonald-Laurier Institute’s Canada-U.S. Dinner

As Prepared for Delivery

This is a wonderful event for me because it centers on what is NOW my passion – strengthening the already close relationship between Canada and the United States.

Each of my predecessors told me — the secret sauce in doing this job is having a good rapport with your counterpart, and they couldn’t have been more correct.  Let me compliment you on Canada’s Ambassador to the United States, David MacNaughton.  David and I collaborate on a daily basis most weeks about the common challenges we face in navigating not only the Canada/U.S. relationship, but also how we on this continent face global challenges together.

We have a special relationship with other countries – but none like Canada.

We are like siblings — living next door to each other – affectionate, loyal…maybe a little competitive.  We are both proud and prosperous countries.

We both have first-term heads of government who are strong-willed and charismatic.  And with the ongoing trade negotiations, NAFTA surely dominates in shaping the popular sense that there are some challenging moments for us to deal with in the days and months ahead.

But the sibling metaphor can be taken a bit too far.  In some ways, it can sound patronizing for an American to say to Canadians, “We are family; it will all work out fine; don’t you worry.”

At the same time, there is no doubt we have far more in common than anything that divides us, even on trade. This concept is my True North, my guiding core principle on any issue between our countries.

In the strongest— healthiest families— as siblings get older, they adapt to change by communicating clearly and being respectful.   In that vein, I want to explain today why our President, with a clear mandate from the people across the United States, saw a need for sweeping change.

Responding to this mandate doesn’t weaken our alliance.  It can be every bit as strong as it has been for decades – if not stronger (my goal).  With our election in 2016, the American people announced we are going in a different direction.  President Trump awakened and inspired the sentiments that had been building up in the United States for a long time.

We don’t want to leave Canada behind; to the contrary, we want you to understand in clear terms –we want an updated NAFTA to stimulate North America to be more competitive in the global economy.

I’ve learned a lot so far in my few months in Canada, but one of the most important things is how knowledgeable Canadians are about what’s going on in the United States. I dare say it is not uncommon for me to find myself in conversation with Canadians from all over the country who are often more informed about American politics than some of my fellow citizens.

That’s a testament to the extraordinary civic mindedness and international outlook of the people of this country. And it stands to reason that they are weighing American actions through a Canadian prism.  But sometimes it is useful to look at all sides.  That too becomes a challenge with today’s competitive 24-hour news cycle.

It is oftentimes difficult to discern what is current news or old news, what is real or fake, what is reporting versus advocacy.  There has been SO much change in the U.S. in the last year – and for that matter, the last 24 hours – that I have to tell you that a lot of Americans will openly express  they don’t really understand what is going on.

That’s why events like this evening are so important. They bring together people, like you and me, who are concerned about future policy decisions.  We both want better outcomes for the citizens of our respective countries.

People who are willing to learn and trust by engaging in “the policy debate,” whatever the topic, will increase the chance for better outcomes.

I wish to thank The Macdonald-Laurier Institute for bringing us together this evening.  This organization is named, as you know, after two of Canada’s great prime ministers.  Sir John A. McDonald, one of your namesakes offered advice about both our countries that is as relevant today as the day he uttered it:

“Whatever you do, adhere to the Union. We are a great country, and shall become one of the greatest in the universe if we preserve it; we shall sink into insignificance and adversity if we suffer it to be broken.”

Our interests may not be identical, to be sure, in every instance today, but we share a lot, even in this period of fundamental change.  So I am humbled to be here this evening to advance our desired win-win objectives.

In my remarks, I will discuss trade, of course, but I also want to talk about why the Canada/U.S. relationship is vibrant, cooperative, and as respectful as ever, even when the signals coming from the media and thought leaders often suggest otherwise. When two siblings have a close relationship, built on a strong and trusting foundation, the success of one leads to the success of the other.

A number of leaders traveled to Davos recently, including our President and your Prime Minister… I want to read you some words spoken at Davos:

“Over the past decades, citizens and workers have been calling for change, but too often, their pleas have been ignored…If we do nothing, and if we operate in the mindset of “business as usual”, the systems will break down, and we will all fail.

“We all know that to be competitive in the modern economy, change is imperative.

And the grassroots desire for change is there – it always has been.  But it’s on us to flip the switch.  We know what needs to be done.  It is well past time that we listen, learn, and finally, lead.”

Now those words were in fact spoken by Prime Minister Trudeau.  I can’t think of a better way to describe the wave that elected Donald Trump or the President’s view about the imperative for change than what the Prime Minister said in Switzerland.

Fundamental change is difficult, regarding both domestic policy and foreign policy, but that is our mandate.  There are some areas, like trade, where there are complex policy differences that need to be worked out.

But across the board, the vision of big changes to better serve every member of our society is shared by both countries.  A revived America, at home and abroad, is very much in Canada’s interest.

Take the administration’s agenda to revive the U.S. economy.  Some experts in both American political parties have claimed our economy can’t possibly grow at a rate above 2% annually ever again.  President Trump simply rejects that pessimistic view.  From record-setting deregulation, to the major tax cuts and reform just passed, to the massive infrastructure program now being pursued, we have a common-sense, broad-based plan to grow the American economy which will in turn grow the global economy.

Look at the effects already – lower unemployment; new capital investment including companies bringing back jobs and money too long parked overseas; greater energy exports; higher business and consumer confidence; and private sector companies like BMO Harris Bank represented here tonight – sharing the wealth with their employees.  BMO Harris’ President and CEO, David Casper, has publicly declared:  “We’re pleased to share the benefits of the strong economic conditions and the effects of the recent tax reform changes with our employees and communities.  Our success is tied directly to the communities we serve…”

Prime Minister Trudeau said last week on his U.S. road trip, there is nothing better for the Canadian economy than a rapidly growing America.

And just as our economies function in similar ways regarding the private and public sectors, our views of how to achieve a just and peaceful world are about as close as any two countries on the planet, even if we sometimes approach them differently.  Consider foreign policy and security, where the President has pursued equally wide-ranging change.  Areas of such shared vision and mutual advantage include solving the North Korea military threat; dealing with Iraq, and Syria; reforming the United Nations; and fighting terrorism.  Historically, culturally, politically, these and other areas are where the U.S. and Canada will continue to lead and both countries will benefit.

When it comes to trade, think how much the economy, technology, and work rules have changed since NAFTA was originally signed.

The U.S. government and the American people want a trade deal with Canada and Mexico that will unleash jobs and economic growth, specifically for those workers who  have felt forgotten and left behind for more than a decade.  Canada and Mexico fundamentally want the same thing.

President Trump in his Davos speech said, “We cannot have free and open trade if some countries exploit the system at the expense of others.  We support free trade, but it needs to be reciprocal.  Because in the end, unfair trade undermines all.”  As friends and allies, let’s work that out.  I’m confident we can.

Now when the President asked me to consider serving as U.S. Ambassador to Canada, he promised that it would be interesting and important.  And yes –he does his part sometimes to keep it interesting, like yesterday’s comments on trade with Canada.

But hey, we are in negotiations and I know we all look forward to the next round in Mexico.

I expect that some who hear the slogan “Make America Great Again” are concerned about our country’s engagement with the world.  I’m here today to tell you that, yes the President will put America First, just as Canada will always – put Canada first.  However “America first” does not mean “America alone.” Goals of enthusiasm and advancement should be celebrated and replicated.  It’s like in the Olympics where our athletes compete with all of their heart against each other in any given event, but then cheer for each other in the finals, hoping for the best performance of a lifetime from their competitors.

We are two modern, diverse, transcontinental nations with deeply shared values, who will continue to work together to ensure that our two nations and the world can be improved for every citizen around the globe.

In closing, the other namesake of The Macdonald-Laurier Institute, Prime Minister Wilfrid Laurier once said:

“I am a subject of the British Crown, but whenever I have to choose between the interests of England and Canada it is manifest to me that the interests of my country be identical with those of the United States of America.”