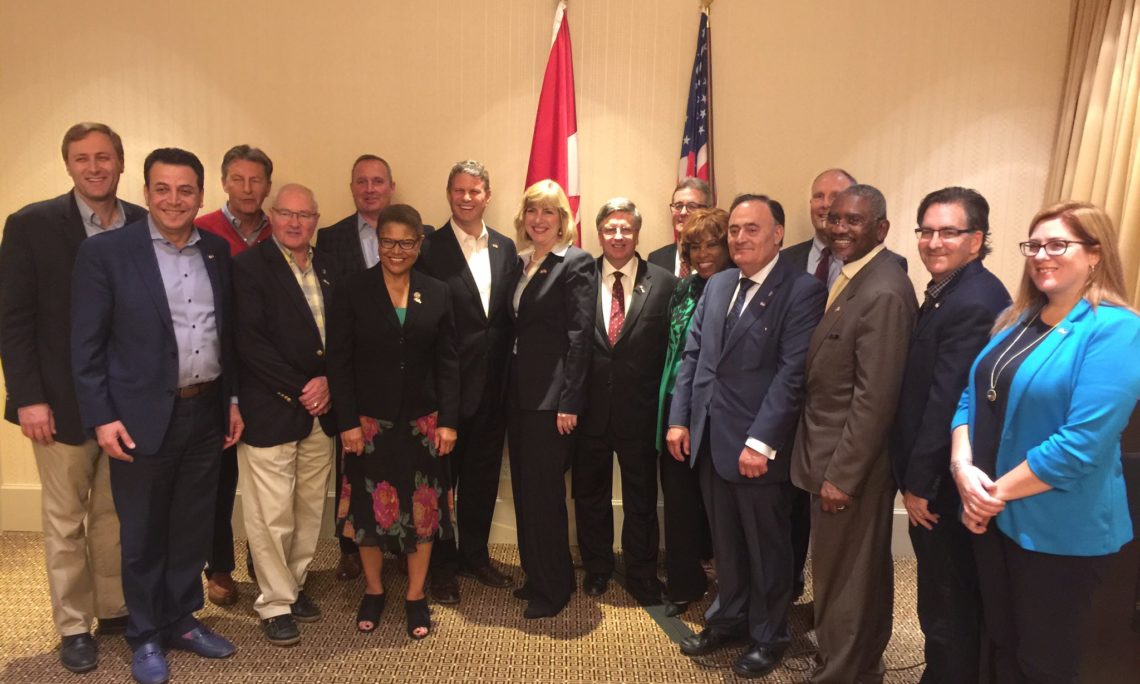 It is always a great pleasure to speak about the U.S. – Canada relationship and I’m particularly happy to do so here in Windsor, Ontario.  I’m very happy to be here with Consul General Doug George.  The border crossings linking Windsor and Detroit are the busiest North American crossings in terms of volume of trade.  The Ambassador Bridge, which the U.S. delegation crossed earlier today, alone sees more than 30 percent of all the merchandise trade transported by truck between the United States and Canada.  With recent approval from the Canadian government for construction of a new span, and the future Gordie Howe International Bridge, this crucial trade corridor will see even greater cross-border traffic in the future.  In other words, if you wanted to witness firsthand the depth of our bilateral relationship, you have come to right spot.

The United States has no better partner than Canada.  But our relationship goes far beyond government officials meeting in Ottawa and Washington or, for that matter, in Windsor and Detroit.  It goes beyond bankers and captains of industry traveling between Toronto and New York.  It’s about small, medium, and large companies seamlessly doing business in both countries.  It’s about government officials at all levels working together to solve shared problems.  Fundamentally, it’s about people traveling back and forth across our shared border to study, to do business, or to visit with friends and family.

One of the unique aspects of the U.S. – Canada relationship is the way we manage our common border.  It was no coincidence that then Secretary of Homeland Security John Kelly was the first Cabinet-level visitor to Canada from the Trump Administration.  During his visit to Ottawa, Secretary Kelly expressed profound admiration for Canada as well as confidence in our relationship when he emphasized that a “thin” border is in the best interest of both of our countries.  Some 400,000 people cross the U.S. – Canada border each day.  And we strive every day to improve efficiency in the border crossing process because we know it will result in financial gains and huge amounts of time saved.  Canada and the United States make that goal a reality every day through our trusted traveler, trusted trader, and preclearance programs.  And we want to build on that success.

It isn’t only people who travel back and forth across our border; Canada and the United States boast the most comprehensive economic relationship in the world.  U.S. and Canadian companies trade, invest, finance, design, innovate, and grow on both sides of our border.  The statistics on trade between our countries are staggering and definitely bear repeating:  In 2016, the United States and Canada traded back and forth $635 billion worth of goods and services.  When you add the trade numbers to what Canadian and U.S. companies have invested in our respective countries, we are talking about a $1.4 trillion economic relationship.  Millions of jobs on both sides of the border rely on this vast volume of trade.  The Great Lakes-St. Lawrence River region alone supports 46 million jobs on both sides of the border.  From the perspective of the United States, Canada is our largest market for exports, and it is the largest destination for U.S. goods from more than 30 U.S. states.

One cannot talk about this unique bilateral trade relationship without mentioning energy.  Canada is the largest, most secure, and most reliable supplier of energy to the United States.  Canada, which provided more than 40 percent of imports in 2016, is by far the largest foreign supplier of crude oil to the United States, three times more than Saudi Arabia, our next largest supplier.  Canada is virtually our only foreign supplier of natural gas – the source of 95 percent of our imports – and Canada is one of the United States’ largest suppliers of uranium, providing nearly one-quarter of the supplies that fuel U.S. reactors.  And almost 100 percent of U.S. electricity imports come from Canada, and much of that comes from hydro power generated right here in Ontario.

Our governments also work to help businesses by increasing regulatory compliance through the Regulatory Cooperation Council, or RCC.  Regulatory cooperation is a way to streamline regulations and give businesses room to grow.  After all, Canadians and Americans use many of the same products, and we have the same commitment to protecting our consumers, whether we’re talking about standards for industrial chemicals, safe railways, or pesticides.  We all want to know that our industrial processes are safe.  Of course it makes sense to align our regulations, standards, and labeling so people can buy and sell products in our two markets without unnecessary and duplicative compliance costs and delays.  Our Mission makes it a priority to speak with local industries, such as the manufacturing industry here in Windsor, to better understand the opportunities for, and challenges to, further regulatory cooperation.

Trade and investment are always two-way deals.  The United States is Canada’s leading source of foreign investment.  Canada is the United States’ largest export market and second largest investor.  This cross-border commerce creates jobs and economic growth that benefit citizens on both sides of the border.  The U.S. Mission to Canada promotes Canadian investment in the United States through the SelectUSA program and I invite you to learn more by visiting SelectUSA.gov/Canada.

Now, to a topic that I’m sure is front and center in most of your minds:  NAFTA – the North American Free Trade Agreement.    The leaders of all three NAFTA countries want to proceed swiftly to negotiate a deal that benefits all three partners.  We’ve seen that intention in action, with two rounds of talks already completed. We have made important progress, in record time I might add, during these first two rounds of talks.  All three countries are now undertaking internal consultations in preparation for the Third Round of negotiations, which will take place in Ottawa from September 23 – 27.

Renegotiating NAFTA is a significant challenge, particularly given the ambitious timeline to get a deal completed.  Mexico, Canada, and the United States have worked closely through NAFTA, and we also have deep experience working bilaterally and multilaterally on a host of trade and non-trade related topics.  Because of our shared experience, there are no three countries better positioned for a quick and successful conclusion of these renegotiations.

In his very first meeting with Prime Minister Trudeau, President Trump remarked that “Our two nations share much more than a border.  We share the same values… We understand that both of our countries are stronger when we join forces in matters of international commerce.”

He was right.  We are stronger when we work together.  This is why forums like the Canada-United States Inter-Parliamentary Group and your consultations this week are so important in continuing to build this dynamic relationship and I thank you for the work that you do.  I would like to close by quoting from the plaque on the Ambassador Bridge that is just as appropriate in describing the U.S. – Canada relationship today as when it was inscribed on the span: En français “Une amitié visible dans les cœurs de deux peuples qui partagent les mêmes idéaux “ and in English “The visible expression of friendship in the hearts of two peoples with like ideas and ideals”