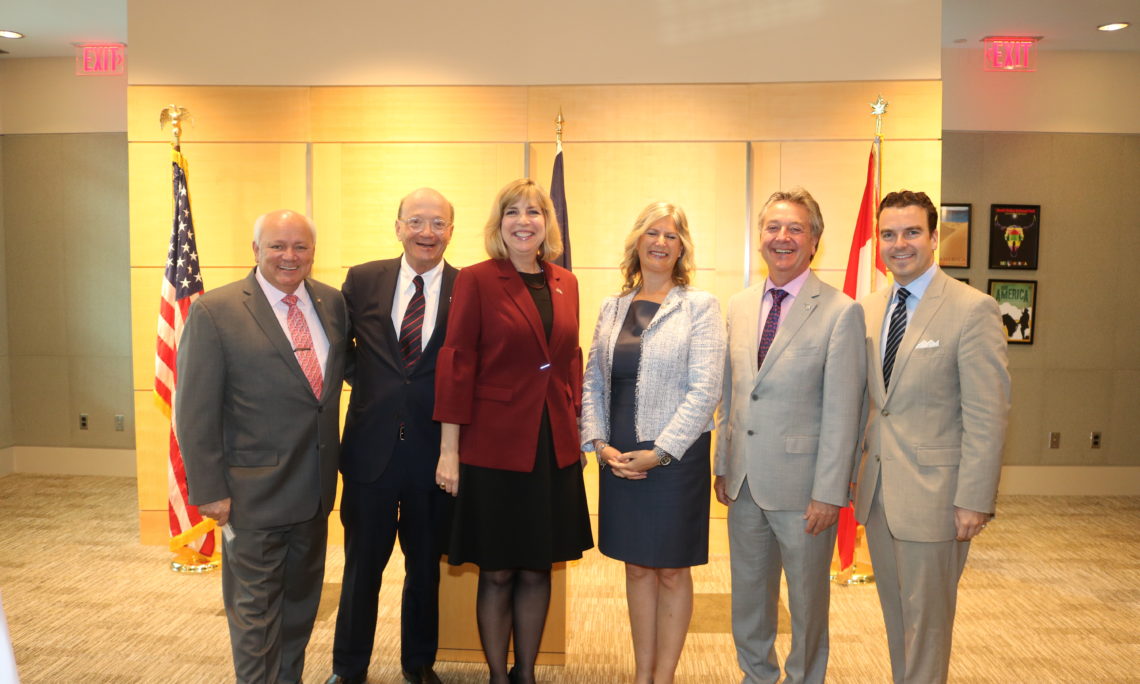 Bonjour and Bienvenue a l’Ambassade des États-Unis. Welcome to the Embassy of the United States! We welcome in particular those of you who have traveled from all corners of the Alliance to take part in this week’s “We Are NATO” program in Canada. And a special thank you to Robert Baines and the NATO Association of Canada for partnering with us in hosting this event today. Robert, you and the NATO Association, in your continued outreach to youth on the importance of the NATO Alliance, demonstrate “best practice” in youth outreach and societal engagement.

The significance of today’s date is not lost on any of us here. 16 years ago today, terrorists attacked the United States and killed more than 3,000 people – citizens of almost every country represented here today.  This was the first – and I am glad to say the only time – that Article 5 of the Washington Treaty has been invoked. The United States could not have had better Allies on that day – or on any day for that matter. Sans exception, nos Alliés de l’OTAN ont répondu rapidement et de manière décisive. Les Américains n’oublieront jamais cette solidarité de l’Alliance. And, as President Trump and other officials have confirmed, and I will repeat today: the United States’ commitment to Article 5 of the Washington Treaty remains ironclad.

Canada’s response on September 11, 2011 was particularly meaningful. After the first plane hit the World Trade Center, Canada began “Operation Yellow Ribbon” to allow commercial flights in North American airspace to land at Canadian airports instead of proceed to the unknown situation in the United States.  Gander International Airport in Newfoundland welcomed more than 200 of those diverted planes swelling the population of Gander by over 60 percent in a matter of days.  Canadians, lived up to their reputation for hospitality and kindness by opening their homes and hearts to the stranded travelers.  The Broadway play “Come from Away,” tells so well some of the stories of that period.

Sadly, terrorist attacks continue. We cannot forget Nice, Paris, Manchester, Berlin, London, and Barcelona, to name only some of the most horrific.  Nor can we forget the attacks in many other locations in Europe and elsewhere.  We remain mindful that the threats we faced on 9/11 sixteen years ago remain.

President Trump has said we need to be “tough, strong, and vigilant” in the fight against terror. His message to Allies remains clear:  to succeed, NATO needs the resources its members promised at the 2014 Wales Summit to invest more in defense capabilities. It is true, Allies have made some progress toward that goal, and we greatly value the contributions of our partners to our shared defense obligations.

I would like to point out that Canada is one of America’s most trusted Allies and a serious partner in defense and security cooperation, demonstrating an extraordinary level of trust and support every day throughout the world. There are many examples of Canada’s strong support to meet the types of challenges we all face today:

I would like to close by quoting President Reagan, whose words three decades ago remain relevant today: “Peace is not the absence of conflict, but the ability to cope with conflict by peaceful means.” It is true, we do not live in a perfect, conflict-free world. But we are blessed to live in a world where peaceful, democratic nations have the means and willpower to support each other against all forms of aggression and to cope with the conflicts that exist.  And, just maybe, if we continue working together, the day will come when President Reagan’s definition will change – and peace will truly mean the absence of conflict.