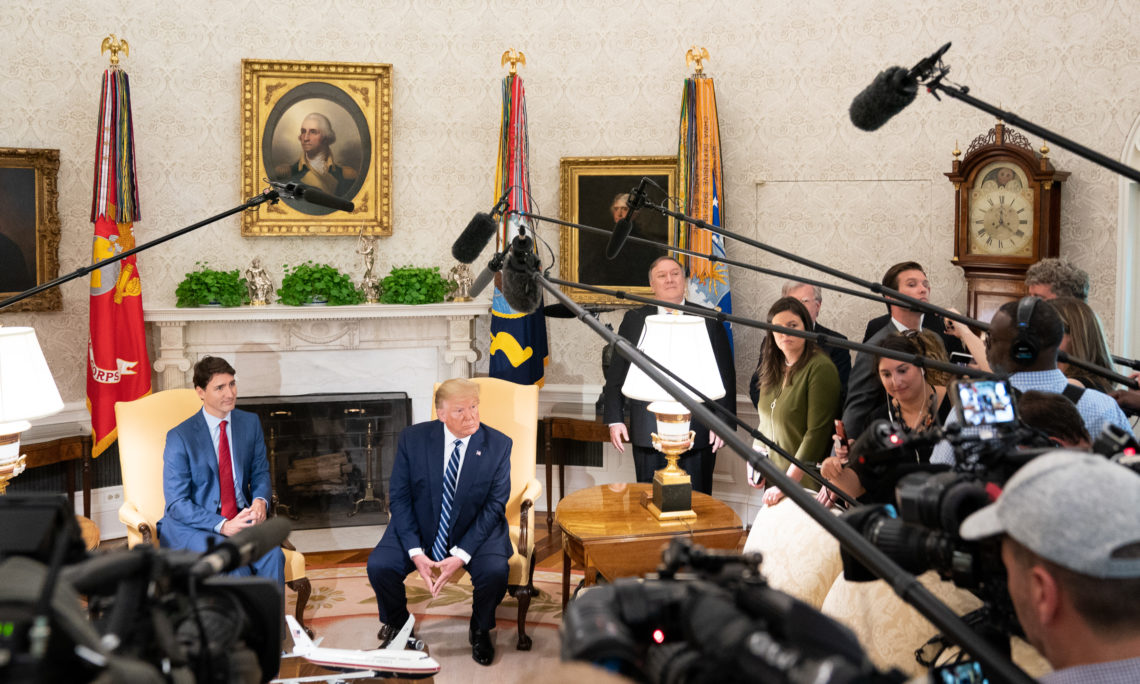 PRESIDENT TRUMP:  Well, thank you very much.  We had some good news.  The market hit a all-time high today.  The S&P just broke its record, so we’re very happy about that.  The stock market continues to do well.  Jobs have been literally through the roof.  And, speaking of jobs, we have the USMCA with Canada, with Mexico.  And we’ve come a long way.  It’s a great agreement.

As you know, Mexico, yesterday, approved it —

PRIME MINISTER TRUDEAU:  We are.

PRESIDENT TRUMP:  But it’s an honor to have the Prime Minister of Canada, Justin Trudeau.  He’s been a friend of mine.  We’ve worked hard together.  We worked, in particular, on the USMCA.  And we hope to have bipartisan support.  I think, Justin, you’re going to be making the rounds at Congress later on?

PRESIDENT TRUMP:  That’s a terrific thing.  But it’s great to have you.

So I want to thank you very much, Justin, for coming to the White House.

We’re moving forward on the ratification process aligned with you.  Obviously, today, as well, on top of the great news on the Canadian and American economies, we’re continuing to work on a broad range of global issues.  Obviously, there’s news today we’re going to be talking about as well.

But this is just a really great opportunity for us to continue to work and to develop and to build on the closest alliance in the world, between Canada and the United States.

And I have to also thank the President of Mexico because he’s really been doing a job on the border and a job in Mexico.  A lot of very positive things have happened.  And the flow has very substantially slowed down.  They have 6,000 Mexican troops on their southern border.  And it’s been — it’s really been a tremendous difference.

So I want to thank Mexico and the people of Mexico.  Now, this has only been for a short period of time.  Our country has been asking for this for 45 years, approximately.  And they’re doing it now.  And we very much appreciate that Mexico is doing that.  It’s going to have a big impact.  It’s already had a big impact.

So, with that, I thank you very much.  And we’re going to get on with our discussions.  Thank you.

This is the new —

(A model plane is presented on the table.)

Q    Mr. President, how will you respond?

PRESIDENT TRUMP:  I was going to say this is the new Air Force One, which we ordered, which they’ve been trying to order for a lot of years.  We were able to shave $1.5 billion off the price.  When I got here, they were going to spend a lot more money than we spent.  And I would say the plane basically is an upgrade over that model.  We actually are getting things that they didn’t get.  We’re saving about $1.5 billion.  So it’s going to be terrific.  It’s under construction, right now, by Boeing.

Q    Mr. President, how will you respond to Iran?

PRESIDENT TRUMP:  Iran made a big mistake.  This drone was in international waters, clearly.  We have it all documented.  It’s documented scientifically, not just words.  And they made a very bad mistake.  Okay?

Q    Does that mean you’re planning to do something?

Q    Mr. President, what are your concerns about China and the Canadians who are detained, sir?

Q    Mr. President, the Fed made no change to the interest rate.

Q    The Fed made no change to the interest rate yesterday.

PRESIDENT TRUMP:  Well, I guess they indicated they’re going to be lower.  He should’ve done sooner, but what are you going do?  Can’t win them all.  He should’ve have done it sooner, but you can’t win it all.  And, eventually, he’ll do what’s right, perhaps.  Let’s see what he does.

Q    Do you intend to bring (inaudible)?

PRIME MINISTER TRUDEAU:  Obviously, we’re very concerned about the escalation by Iran recently.  We have significant presence in the area, including leading on the NATO mission in Baghdad, in Iraq.

We look forward to discussing with our closest ally — their perspectives on this — and how we can move forward as an international community.

Q    Will you help Justin Trudeau get a meeting with Xi Jinping at the G20 next week to talk about the detained Canadians?

PRESIDENT TRUMP:  Well, I don’t know that he’s trying to meet.  Are you trying to get a meeting?

PRIME MINISTER TRUDEAU:  We’ve got a lot of things to discuss.

PRESIDENT TRUMP:  Well, otherwise, I’ll represent him well, I will tell you.  We have a meeting set up with President Xi, and it’s obviously on the big transaction that we’re talking about and negotiating.  Our people are actually speaking now, and we’ll see what happens with that.  But anything I can do to help Canada, I will be doing.

Q    Are you planning to bring it up with President Xi when you meet with him?

Q    Are you planning to bring it up with President Xi when you meet with him?

PRESIDENT TRUMP:  I would.  At Justin’s request, I will absolutely bring that up.

Q    When the USMCA is ratified, sir, will that be the end of tariffs?

PRESIDENT TRUMP:  Don’t say “when,” because, so far, I have to get the Democrats to approve it.  So, I like your positive thinking.  But if — and the “if” is really subject to the Democrats.  Let’s see what happens.

Now, a day after the election, it would win with tremendous support.  But we have an election coming up.  But I think Nancy Pelosi is going to do the right thing.

Q    And will that be the end of tariffs on Canada and Mexico?

PRIME MINISTER TRUDEAU:  We were very pleased with the lifting of the tariffs on steel and aluminum.

PRESIDENT TRUMP:  But I think that that situation is very well taken care of.  Very important for both countries and for all three countries: the farmers.  Very, very important.  More so in that case, from us and Canada.  But the farmers are really happy with it.  The manufacturers are very happy.  Mexico is thrilled.  You saw the vote.  It was a very lopsided — in a positive way — vote.  A great vote.  And I think it’s going to be something very special.

Again, it’s the largest trade deal, by far, ever entered into.  And we’re very close to having it finalized.  This means a lot of jobs for our country; a lot of wealth for all three countries.  And we’re really competing against the world.  You know, we’re not competing with each other so much.  This brings us into a position where we’re not competing with each other; we’re competing against the world.  And that’s what we’re doing.

Q    Will you invite the Toronto Raptors to the White House, sir?

Q    Will you invite the Toronto Raptors to the White House?  I’m from the Toronto Star.  I have to ask.

We have a lot of other folks coming.  And the presidential medal — I just spoke to him — we’re going to be presenting the Presidential Medal of Freedom to Roger Penske.  Roger Penske is a great gentleman who has won 18 Indianapolis 500s.  He’s won — just won Daytona.  He won Daytona.  He won Indianapolis.  He won probably more than anybody in the history of racing.  I can’t imagine anybody even being close.

He’s very deserving.  He’s a great gentleman.  I’ve known him a long time.  And a very brilliant guy.  When you think of all the countries that want to win Indianapolis and Daytona, and they fight and they spend — even Canada; they spend a lot of money and they —

And, you know, when a man wins Indianapolis, when he wins it 18 times — and he just won the Daytona.  And he won many things over the course of years, and he’s become a very successful man.

We talked about electric cars today.  I think nobody knows more about that subject, in terms of common sense, than Roger Penske.  So Roger Penske will be getting and receiving the Presidential Medal of Freedom.

Q    Mr. President, you said Iran is a “different country.”  Do you still hold that opinion?

PRESIDENT TRUMP:  Oh, absolutely.  When I came here, Iran was in 14 to 18 different sites of confliction.  They were extremely hostile.  They were hostile when they signed the deal.  They were screaming, “Death to America.”  And I think, probably, Iran made a mistake.  I would imagine it was a general or somebody that made a mistake in shooting that drone down.

And, fortunately, that drone was unarmed.  It was not — there was no man in it, and there was no — it was just — it was over international waters; clearly over international waters.  But we didn’t have a man or woman in the drone.  We had nobody in the drone.  It would have made a big difference, let me tell you.  It would have made a big, big difference.

Q    Are you still open to talking to Iran’s leadership?

Q    (Inaudible) to strike the drone?

Q    Are you saying you think it wasn’t intentional to strike the drone?

PRESIDENT TRUMP:  I don’t know.  I find it hard to believe it was intentional, if you want to know the truth.  I think that it could have been somebody who was loose and stupid that did it.  But we’ll be able to report back, and you’ll understand exactly what happened.  But it was a very foolish move, that I can tell you.

Q    Do you feel like there are members of your administration who are trying to push you into conflict with Iran?

PRESIDENT TRUMP:  No, not at all.  Not at all.  In fact, in many cases, it’s the opposite.

But this is something — this is a new wrinkle.  This is a new fly in the ointment, what happened shooting down the drone.  And this country will not stand for it, that I can tell you.

PRESIDENT TRUMP:  I can’t hear you.