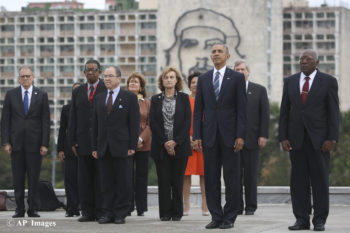 Back dropped by a monument depicting Cuba’s revolutionary hero Ernesto “Che” Guevara, U.S. President Barack Obama, Vice-President of Cuba’s State Council Salvador Valdes Mesa, right, and other members of the U.S. delegation stand during a ceremony at the Jose Marti Monument in Havana, Cuba, Monday March 21, 2016. “It is a great honor to pay tribute to Jose Marti, who gave his life for independence of his homeland. His passion for liberty, freedom, and self-determination lives on in the Cuban people today,” Obama wrote in dark ink in the book after he laid a wreath and toured the memorial dedicated to the memory of Jose Marti. (AP Photo/Dennis Rivera) – Puerto Rico OUT