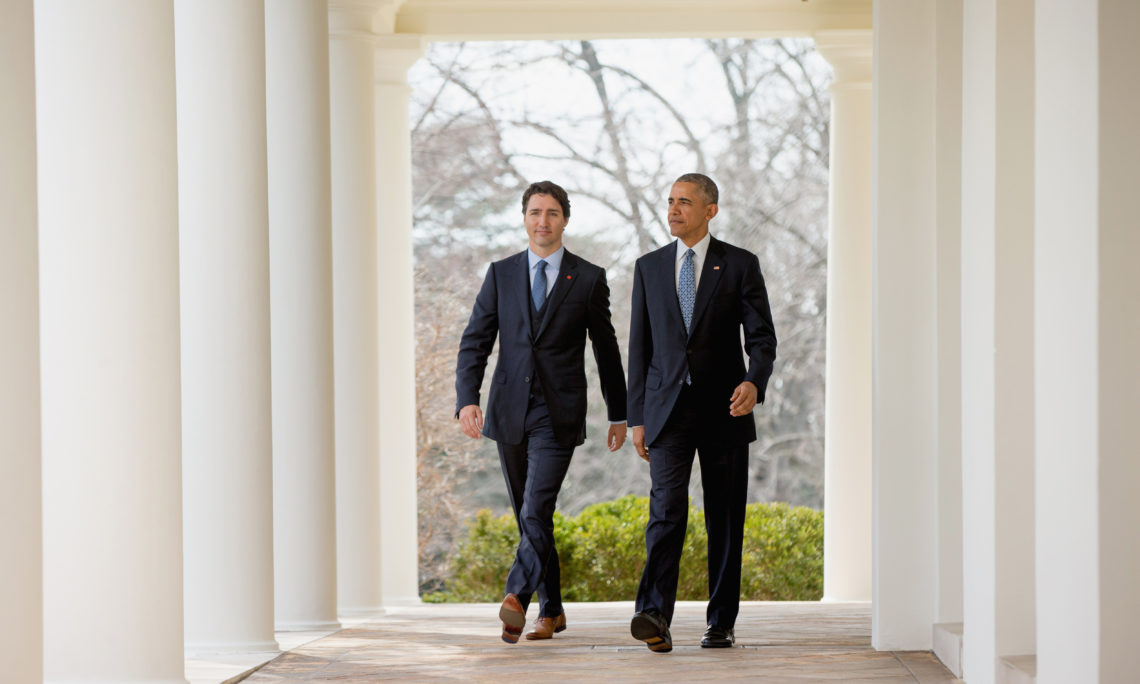 President Barack Obama and Canadian Prime Minister Justin Trudeau walks through the colonnade to speak at a bilateral news conference in the Rose Garden of the White House in Washington, Thursday, March 10, 2016. (AP Photo/Andrew Harnik)

PRESIDENT OBAMA: Bonjour. On behalf of the American people, on behalf of Michelle and myself, it is my honor to welcome to the United States Prime Minister Justin Trudeau — (applause) — Mrs. Grégoire-Trudeau, their beautiful children, and the quite good-looking Canadian delegation. (Applause.)

It’s long been said that you can choose your friends, but you cannot choose your neighbors. (Laughter.) Well, by virtue of geography, the United States and Canada are blessed to be neighbors. And by choice, we are steadfast allies and the closest of friends. (Applause.) The truth is, though, we don’t express this enough, in part because of our national characters. Our Canadian friends can be more reserved, more easygoing. We Americans can be a little louder, more boisterous. And as a result, we haven’t always conveyed how much we treasure our alliance and our ties with our Canadian friends. And that’s why, today, we are very proud to welcome the first official visit by a Canadian Prime Minister in nearly 20 years. (Applause.) It’s about time, eh? (Laughter.)

And what a beautiful day it is. Which is a little unfair. As President, my very first foreign trip was to Canada — to Ottawa in February. (Laughter.) In the snow. Still, our friends from the Great White North gave me a very warm welcome. Mr. Prime Minister, we hope to reciprocate some of that warmth today, with your first official visit south of the border.

We’re joined today by proud Canadian-Americans. (Applause.) We are family. And this is also a special day for the many Canadians who live and work here in America and who enrich our lives every day. We don’t always realize it, but so often, that neighbor, that coworker, that member of the White House staff, some of our favorite artists and performers — they’re Canadian! (Laughter.) They sneak up on you. (Laughter.)

Even as we remember what makes us unique, Americans and Canadians, we see ourselves in each other. We’re guided by the same values, including our conviction that the blessings we cherish as free people are not gifts to be taken for granted but are precious freedoms that have to be defended anew by every generation. Americans and Canadians — our brave men and women in uniform — have paid the price together across a century of sacrifice, from the poppy fields of Flanders to the rugged mountains of Afghanistan. As NATO allies, we stand united against terrorism and for the rights of nations like Ukraine to determine their own destiny. As leaders at the United Nations, we stand up for peace and security and the human rights of all people.

Our shared values also guide us at home. I’m proud to be the first American President to stand with a Canadian Prime Minister and be able to say that — in both our nations — health care is not a privilege for a few but is now a right for all. (Applause.) And as two vast and vibrant societies, we reaffirm that our diversity is our strength — whether your family was among the first native peoples to live on these lands or refugees we welcomed just yesterday. Whether you pray in a church or a synagogue, or a temple, or a mosque. Where, no matter what province or state you live in, you have the freedom to marry the person that you love. (Applause.)

Now, I don’t want to gloss over the very real differences between Americans and Canadians. There are some things we will probably never agree on: Whose beer is better. (Laughter.) Who’s better at hockey.

AUDIENCE MEMBER: We are. We are. (Laughter.)

And this visit is special for another reason. Nearly 40 years ago, on another March morning, another American President welcomed another Canadian Prime Minister here to the White House. That day, Prime Minister Pierre Trudeau said that the United States is “Canada’s best friend and ally.” And one of the reasons, he said, is that we have “a common outlook on the world.” Today, Prime Minister Justin Trudeau carries on this work.

Mr. Prime Minister, your election and the first few months in office have brought a new energy and dynamism not only to Canada but to the relationship between our nations. We have a common outlook on the world. And I have to say, I have never seen so many Americans so excited about the visit of a Canadian Prime Minister. (Applause.)

So with this visit, I believe that the United States and Canada can do even more together — even more to promote the trade and economic partnerships that provide good jobs and opportunities for our people. Even more to ensure the security that so many Americans and Canadians count on so that they can live in safety and freedom. Even more to protect our countries and our communities — especially in the Arctic — from climate change, just as we acted together at Paris to reach the most ambitious agreement in history to fight climate change. (Applause.) And guided by our values, we can do even more together to advance human development around the world — from saving a child from a preventable disease to giving a student in Africa electricity to study by — because, as Americans and Canadians, we believe in the inherent dignity of every human being. (Applause.)

As always, our work as nations remains rooted in the friendship between our peoples. And we see that every day in communities along our shared border. Up in Hyder, Alaska, folks head across the border to celebrate Canada Day, and folks in Stewart, British Columbia come over for the Fourth of July. At the baseball diamond in Coutts, Alberta, if you hit a home run, there’s a good chance the ball will land in Sweetgrass, Montana. (Laughter.) And up where Derby Line, Vermont meets Stanstead, Quebec, Americans and Canadians come together at the local library where the border line literally runs right across the floor. A resident of one of these border towns once said, we’re two different countries, but we’re like one big town and “people are always there for you.”

So, Prime Minister Trudeau — Justin, Sophie — to all our Canadian friends — we are two different countries, but days like this remind us that we’re like one big town. And we reaffirm that Americans and Canadians will always be there for each other. Welcome to the United States. Bienvenue, mes amis. (Applause.)

PRIME MINSTER TRUDEAU: Mr. President, First Lady, distinguished guests, friends, ladies and gentlemen — thank you for this extraordinary welcome. Thank you so much for inviting Sophie and me and, through us, all of Canada to join with you on this spectacular morning. Thank you very much. (Applause.) Sophie and I, along with our entire delegation, are honored and touched by your magnificent hospitality, and by the reinforcement of just how powerful you are, Mr. President, to organize such a perfect day for us. (Laughter.)

(Speaks in French, then continues in English.)

You may recall that our government was elected on a plan to strengthen the middle class. We have an ambitious innovation agenda as we realize that revitalizing our economy will require investing in new ideas and new technologies. Our plan will foster emerging industries, create good jobs, and increase our global competitiveness. That was the Canadian plan, and of course, it very much resembles the challenges and the solutions that you’ve been putting forward here south of the border — a plan to invest in our country and invest in our people. And it’s wonderful to see that our American friends and partners share and are working on the exact same objectives.

See, as our leading trading partner and closest ally, the relationship between our two countries has always been vital. As an exporting nation, Canada is always eager to work closely to reduce trade barriers between our countries. And speaking of exports, we know with certainty that there’s a high demand for Canadian goods down here. A few that come to mind that President Obama just rightly recognized as being extraordinary contributors to the American success story is Jonathan Toews, Duncan Keith, and Patrick Sharp of the Chicago Blackhawks. (Applause.)

We’ve faced many challenges over the course of our shared history. And while we have agreed on many things and disagreed on a few others, we remain united in a common purpose — allies, partners, and friends as we tackle the world’s great challenges. Whether we’re charting a course for environmental protection, making key investments to grow our middle class, or defending the rights of oppressed peoples abroad, Canada and the United States will always collaborate in partnership and good faith. The history may be complex, but the bottom line is clear. There is no relationship in the entire world like the Canada-U.S. relationship. (Applause.)

Our great countries have been friends a long time. We grew up together. And like all great enduring friendships, at our best, we bring out the best in one another. And through it all, our enormous shared accomplishments speak for themselves — prosperous, free, diverse societies that have shaped history together.

We could not be prouder of that past. And on behalf of 36 million Canadians, I thank you all for your warm welcome. Now let’s get to work on shaping our shared future.