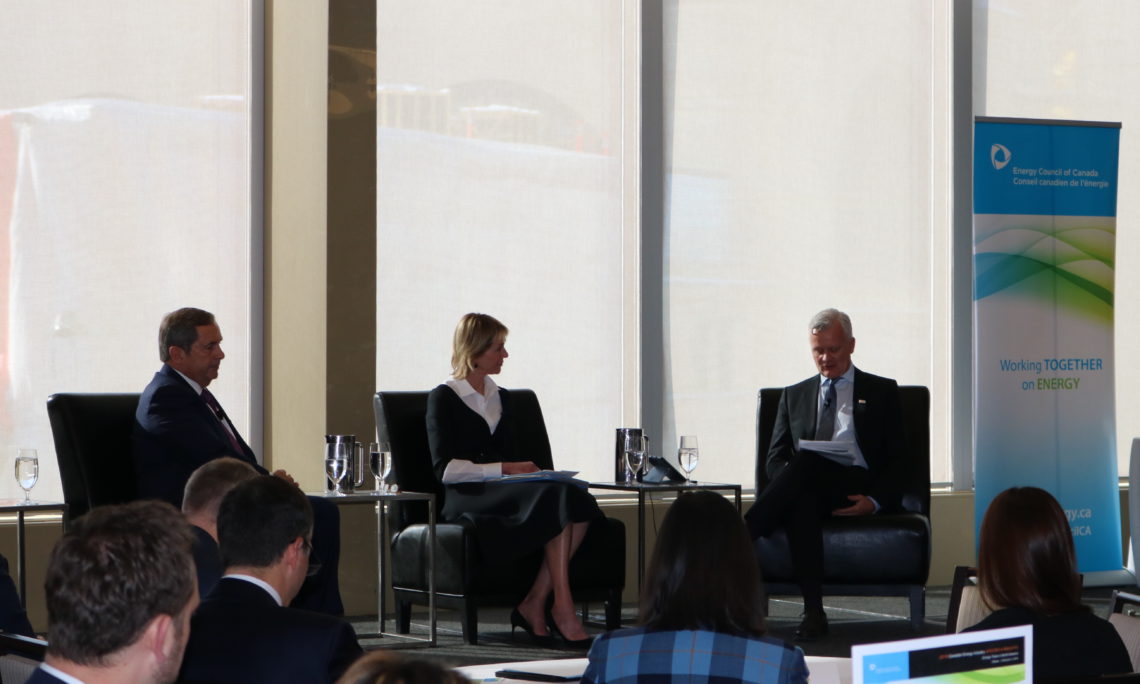 As prepared for delivery

Thank you for inviting me to spend some time with you today.  As a relatively new diplomat with less than six months under my belt, I am still in that phase of meeting people for the first time.  I look forward to listening to you and learning from you.

In order to tee up our conversation, let me make a few observations.  First of all, when they told me at the State Department ambassadorial school that Ottawa was the second coldest world capital, second only to the capital of Mongolia, I think they UNDER sold it!   But no worries, I plan to trade in my running sneakers for cross country skis and will bundle up to explore the true north.

Second of all, when the President asked me to consider serving as U.S. Ambassador to Canada, he promised that it would be interesting and important.  I didn’t really need him to continually offer to “tear up” NAFTA to keep it interesting; a little bit of boring in my first six months would have been just fine.  But hey, the negotiators are doing their thing, and I know we all look forward to the next round, which mercifully will be held in Mexico (a good place in February – further to my earlier point.)

Third, by way of introductory thoughts, let me just compliment you on your representative in Washington.  One of the wonderful aspects of this job for me has been getting to know and work very closely with Canada’s Ambassador to the U.S., David MacNaughton.  He is not only smart, funny, and obviously well regarded, but he is also willing to try new things, like learning to share our love for Kentucky bourbon …  Each of my predecessors told me that the secret sauce in doing this job is having a good rapport with your counterpart, and they couldn’t have been more correct.  David and I collaborate on a daily basis most weeks about the common challenges we face in navigating not only the Canada/U.S. relationship, but also how we face global challenges together.

Now since you’re the Energy Council, you are probably hoping that I say a few words about energy.  Well – as much as I think I know about energy, coming from an energy producing state and well, family, many here in this room are experts in your field.  So I am not going to rattle off statistics you already know.

Let me make a couple of observations; If you are an energy producer my guess is you were happy the groundhog saw his shadow last Friday. My husband certainly was!

My second observation is that one of the most exciting areas in the Canada/U.S. energy industry is innovation.  In the past 10 years the “shale” revolution in the United States has nearly doubled its oil production and increased natural gas production by 40 percent. Thanks in large part to private sector innovation, the United States now has one of the most abundant and diverse energy mixes in the world. We enjoy vastly expanded oil and natural gas resources, affordable clean coal, expanding renewable energy resources and safe and reliable nuclear energy.

This innovation has (1) led North America to have more energy security at home and (2) enabled us to become a significant exporter of low cost energy, which has strengthened our national security interest abroad.

Our governments have also contributed to and encouraged innovation to include an important cross-border aspect.  Right here in Ottawa, the U.S. Department of Energy and Natural Resources Canada (NRCan) have partnered on a pilot project at the NRCan laboratory in Bell’s Corners to burn biomass efficiently in order to produce very low emissions. And farther afield, Saskatchewan’s Boundary Dam power plant – one of only two operating coal fired power plants in the world with carbon capture and storage — has also benefited from U.S. Department of Energy support.

Further evidence of cross-border collaboration:  a few weeks ago, NRCan’s senior official for Innovation and Energy Technology spent time at the U.S. National Lab in Berkeley, California, to identify where we can work even more closely on creating new knowledge that can help power our future. Innovation is something that Canada, the United States, and Mexico have agreed is critical to further develop North America’s vast energy resources.

Last June, President Trump said, “a golden era of American energy is now under way” and it will create new opportunity and prosperity across the country. The economic benefits to our energy collaboration and innovation are hard to deny.  The research by IHS, the global energy analytics firm, indicates that every state in the Union is benefiting, regardless of whether unconventional oil and gas development is happening in their region. IHS estimated that by 2020, almost 113 billion USD in revenue will be created and that 2.9 million direct and indirect jobs will result from the economic activity associated with unconventional oil and gas development in the U.S. alone.

And lower prices for energy and chemical feedstocks bring great competitive advantages to American manufacturing as well. Investments of nearly 350 billion US dollars in new chemical, plastics, and related manufacturing facilities across the United States are expected by 2025.

And these benefits are also shared with Canada.

In December, Calgary-based NOVA Chemicals announced a capital investment of more than two billion Canadian dollars in their Sarnia, Ontario, petrochemical complex.  That complex depends 100 percent on feedstock – ethane – that comes from the Utica and Marcellus Shale of Pennsylvania.

The Trump Administration has worked to accelerate the impact of the energy boom by streamlining permitting. Getting new energy infrastructure built is critically important so we can take full economic advantage of this opportunity.

Our friends in Canada agree.  The Canadian Electricity Association and others have pointed out the enormous investment required to power North America’s next phase of economic growth. For example, it will cost some 24 billion Canadian dollars to refurbish Ontario’s nuclear power plants. The bottom line is that there are broad economic benefits for our countries because of our emerging energy dominance.

A few moments ago, I mentioned that Ambassador MacNaughton and I work not just on bilateral issues, but also we collaborate on how Canada and the U.S. face global challenges together.  Your energy sector plays a fundamental role in this effort.

Expanding energy exports advances the President’s foreign policy; while bringing rising incomes at home, the North American energy revolution allows us to use our energy bounty to spread stability and security across the globe, while advancing the security and economic interests of our own nations.

Jamaica is one example: fuel oil dependence for electric power generation is being replaced by natural gas and renewables like wind and solar. In Africa, abundant LNG from North America – as well as new supply from Africa itself – will help bring electricity to millions and support economic growth.

So what does the growth in U.S. energy production mean for our energy relationship with Canada and Mexico?

That brings us to the ongoing NAFTA negotiations. The United States wants NAFTA modernization to strengthen the North American energy revolution and promote North American energy security and self-sufficiency. To do this, we will ensure that NAFTA 2.0 maintains duty-free trade in energy goods and locks in Mexico’s 2013 energy market reforms. But a separate “Energy Chapter” must add value, not duplicate obligations found in other chapters.

Mindful of the time, and hoping that we can spend more time in dialogue, let me wrap up by thanking you for all that you do to help advance not only the Canadian energy industry – but the Canada/U.S. relationship as a whole.

As former PM Mulroney testified last week before the U.S. Senate, he fondly quoted Winston Churchill’s one-time description of Canada-U.S. ties, saying, “That long frontier from the Atlantic to the Pacific Ocean guarded only by neighborly respect and honorable obligations; It is an example to every country and a pattern for the future of the world.”