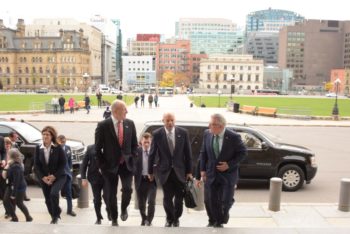 Secretary Johnson and Ambassador Heyman walk up the steps of Parliament with Canadian Public Safety Minister Ralph Goodale. Secretary Johnson was in Ottawa to participate in bilateral meetings with Canadian counterparts to discuss continued cooperation on priority issues for both governments (DHS Photo/Jetta Disco)