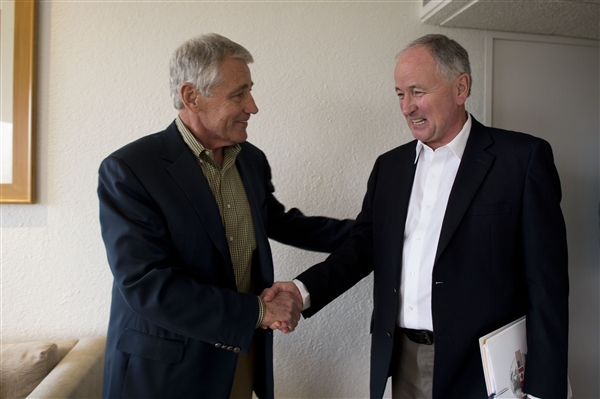 Secretary Hagel met in Mexico City today with Canadian Minister of Defense Rob Nicholson. The two leaders were in Mexico to attend the second North American Defense Ministry principals meeting between the defense ministers of the U.S., Canada and Mexico.

Secretary Hagel and Minister Nicholson discussed a range of issues of mutual concern, to include the situation in Ukraine, recent developments in the Asia-Pacific region, and, of course, common security challenges in the Western Hemisphere.

Shared enthusiasm for the next day’s discussion was prominent throughout the 30-minute meeting, as both Secretary Hagel and Minister Nicholson expressed eagerness to discuss in more detail ways in which all three nations can work more closely together to deal with the threats posed by criminal networks, cyber attacks and natural disasters.

Secretary Hagel also thanked Minister Nicholson for his leadership and for Canada’s strong contributions to the NATO Alliance, including the ISAF mission.