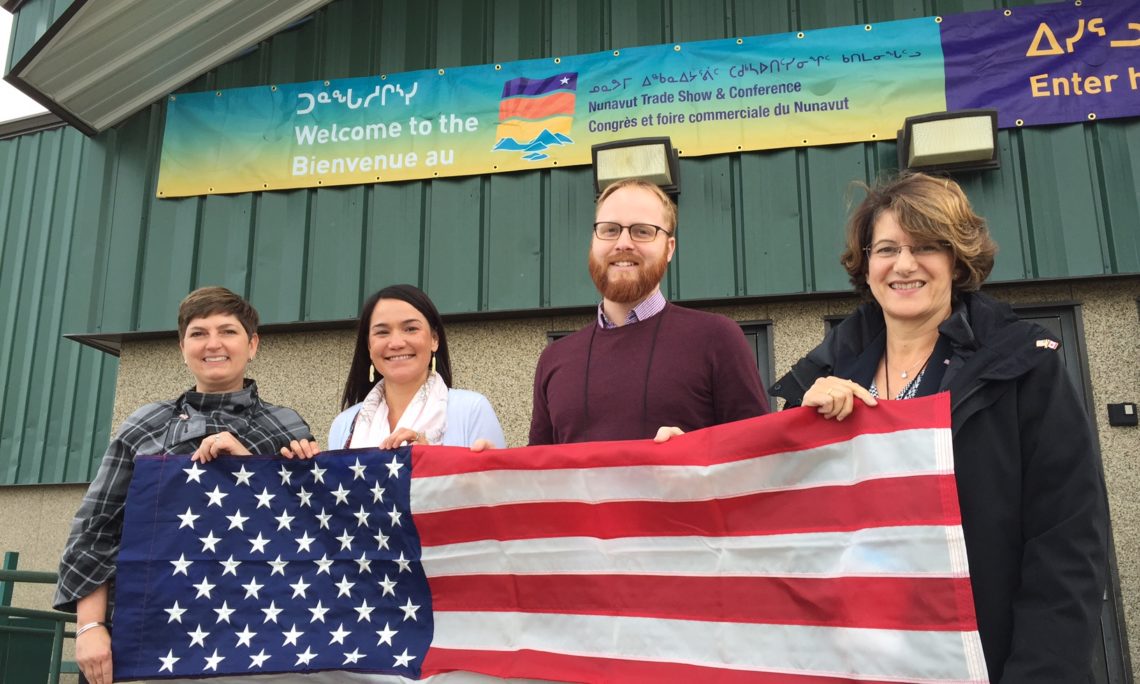 The U.S. Consul General in Quebec City, Allison Areias Vogel, recently traveled to Iqaluit to lead the first Alaskan delegation participating in the Nunavut Trade Show.  The show brings together government, Inuit organizations, Nunavut and Southern businesses, investors, and entrepreneurs. The U.S. Consulate in Quebec City also hosted a booth at the trade show to inform visitors about consular services; the role of the Consulate in providing networking opportunities for business investors in the United States and Québec/Nunavut and in promoting bilateral relations in general; and information on the services offered by private sector experts representing the Alaskan delegation.

In Iqaluit, the Consul General and delegation had the opportunity to meet with Premier Peter Taptuna, and to promote U.S. trade and investment in the territory. The Consul General and delegation also met officials from the federal and territorial governments, economic development representatives, and local schools to develop partnerships and linkages between Alaska and Nunavut, to support Americans residing in Nunavut, and to identify opportunities for cultural and academic exchanges. The meetings included a dinner with Iqaluit Mayor Madeleine Redfern and a courtesy call with Monica Ell-Kanayuk, Minister of Economic Development and Transportation, Mines, Energy, and Status of Women.  The Consul General also spoke to grade 11 students at Inuksuk High School and met with the director of the Law Degree Program at Nunavut Arctic College.

The Alaska delegation was represented by Tina Pidgeon from GCI, a telecommunication corporation operating in Alaska, and Sarah Lukin from PT Capital, a private equity firm concentrating on investment opportunities in the Arctic. Meetings with local government officials gave the visitors the chance to underscore opportunities for Alaska and Nunavut, as northern communities facing similar challenges, to stimulate cooperation and bolster economic development across the northern U.S.-Canada border.

GCI provides communication and technology services to some of the most remote communities, bringing telemedicine and online education capabilities to communities across Alaska and continuing efforts to connect the Arctic globally as well as providing strong services to consumer and business markets.  PT Capital is focused on acquiring or taking majority ownership in resource extraction support companies, including housing, transportation, aviation, marine services and other general service areas.