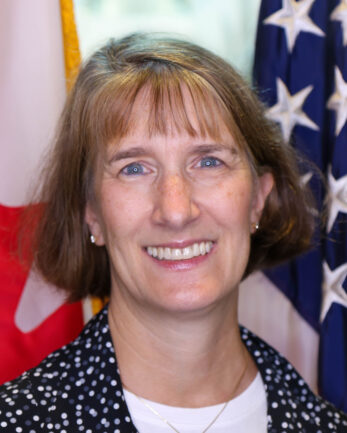 Katherine Brucker is a career member of the Senior Foreign Service.  Her assignments include both bilateral and multilateral work as well as extensive experience on the Secretary of State’s staff.

Ms. Brucker began her career in 1994 as an Economic Officer in Port-au-Prince, Haiti working on economic development in a post-conflict society.  She transferred to Bonn in 1996 serving as a Consular Officer and then the Ambassador’s Staff Assistant.  From 1998 to 2000 she worked in the Executive Secretariat, supporting the Secretary’s foreign travel to some thirty countries.

Following a year of economic training in Washington (2000-2001), Ms. Brucker joined the U.S. Mission to the Organization for Security and Cooperation in Europe (OSCE) in Vienna.  There she worked on Good Governance, Counter Terrorism as well as Balkan and Central Asian issues.  Key achievements include winning agreement from all 55 OSCE participating States for action on terrorist financing and enhanced travel document security.  Leaving Vienna in 2005, Ms. Brucker became head of the Political, Economic and Commercial Section at Embassy Yaoundé (Cameroon).  In July 2007 Ms. Brucker became a senior watch officer in the Operations Center.

From August 2008 to July 2011 she served as Principal Officer at the Consulate General in Leipzig, Germany, the only U.S. diplomatic mission in the former East Germany.  Her work there centered on building understanding of the United States and support for U.S. policies among political figures and the public at large.  She returned to Washington in July 2011 to attend the Industrial College of the Armed Forces, earning a Master of Science in National Resource Strategy (Distinguished Graduate).  She then spent two years as a Special Assistant to the Under Secretary for Economic Growth, Energy and the Environment, where she concentrated on commercial advocacy.  From 2014 to 2017 she served as Deputy Chief of Mission in Libreville, Gabon.

In August 2017 she transferred to Abidjan, Côte d’Ivoire and immediately became Chargé d’Affaires, a.i., a position she held for two years until the arrival of an Ambassador.  In August 2020 she arrived in Ottawa, Canada to take up her duties as Deputy Chief of Mission.

Outside of work Ms. Brucker enjoys choral singing.  She has sung with choirs in Washington, Bonn, Vienna, Leipzig and Abidjan.  She is also an avid touring cyclist, regularly pedaling hundreds of kilometers along the Danube, the former East-West German border, the Elbe or the Rhine.