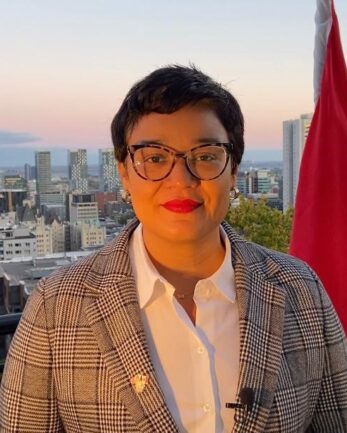 A 19-year veteran of the Foreign Service, Ana Escrogima is the Consul General at the U.S. Consulate General in Montreal. Most recently, she served as the Office Director for Regional and Multilateral Affairs in the Near Eastern Affairs Bureau. Ana served overseas as Deputy Chief of Mission in the Yemen Affairs Unit in Saudi Arabia, established in 2015 after the closure the U.S. Embassy in Sana’a, Yemen.

A former Rusk Fellow at Georgetown’s Institute for the Study of Diplomacy, Ana has extensive experience abroad and in Washington, D.C. She was the State Department’s UAE-based Arabic language spokesperson and served as the Public Affairs Officer in Algeria, where she was responsible for all bilateral cultural and press engagements. Ana served as a political officer at the U.S. embassies in Iraq and Syria; she was the Special Assistant to former Under Secretary of State for Political Affairs Wendy Sherman, with responsibility for Middle East issues – most notably the Iran nuclear negotiations.

Ana was also a Diplomat-in-Residence for the New York Metro area, where she focused on reaching diverse audiences with the department’s recruitment pitch and taught a course on U.S. diplomacy in the Middle East. She is the recipient of numerous State Department Superior and Meritorious Honor Awards. In 2020, Ana was awarded the Arnold L. Raphel Memorial Award in recognition of work promoting diversity at the State Department – recruiting underrepresented groups, supporting entry-level employees, and advocating for institutional change.

Originally from New York, Ana graduated from Brown University as a Thomas R. Pickering Foreign Affairs Fellow with a B.A. in International Relations and Affairs and French, and holds a Master’s Degree from Columbia’s School of International and Public Affairs.