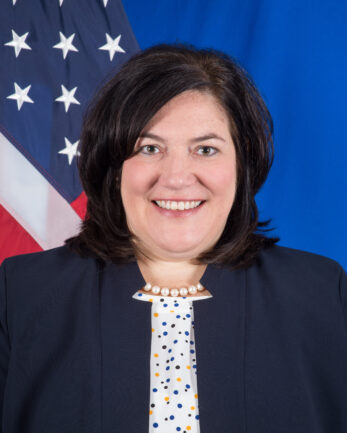 Holly Waeger Monster assumed duties as the U.S. Consul General in Calgary, Canada in July 2021. A career Foreign Service Officer, she has focused on strengthening economic ties between the United States and its partners since joining the U.S. Department of State in 2001. During assignments in Kenya, Poland, Bolivia, South Africa, and Malawi, she advanced U.S. interests in the energy and mining sectors; designed U.S. Government strategies to combat wildlife trafficking; fostered science, technology, and health cooperation; supported labor provisions of free trade agreements; and enhanced aviation security.

In Washington, DC, Ms. Waeger Monster served as Staff Assistant to the Assistant Secretary of State for Economic and Business Affairs and as a Career Development Officer in the State Department’s Bureau of Global Talent Management. Prior to joining the U.S. Department of State, she worked on international debt policy at the U.S. Department of the Treasury and conducted research on free trade at the Council on Foreign Relations. Originally from Pennsylvania, Ms. Waeger Monster earned a master’s degree in International Trade and Investment Policy at George Washington University and a bachelor’s degree in International Studies and Economics at American University, both in Washington, DC. Her husband, Edward, is also a Foreign Service Officer and they have three children.

Tweets by US Consulate Calgary