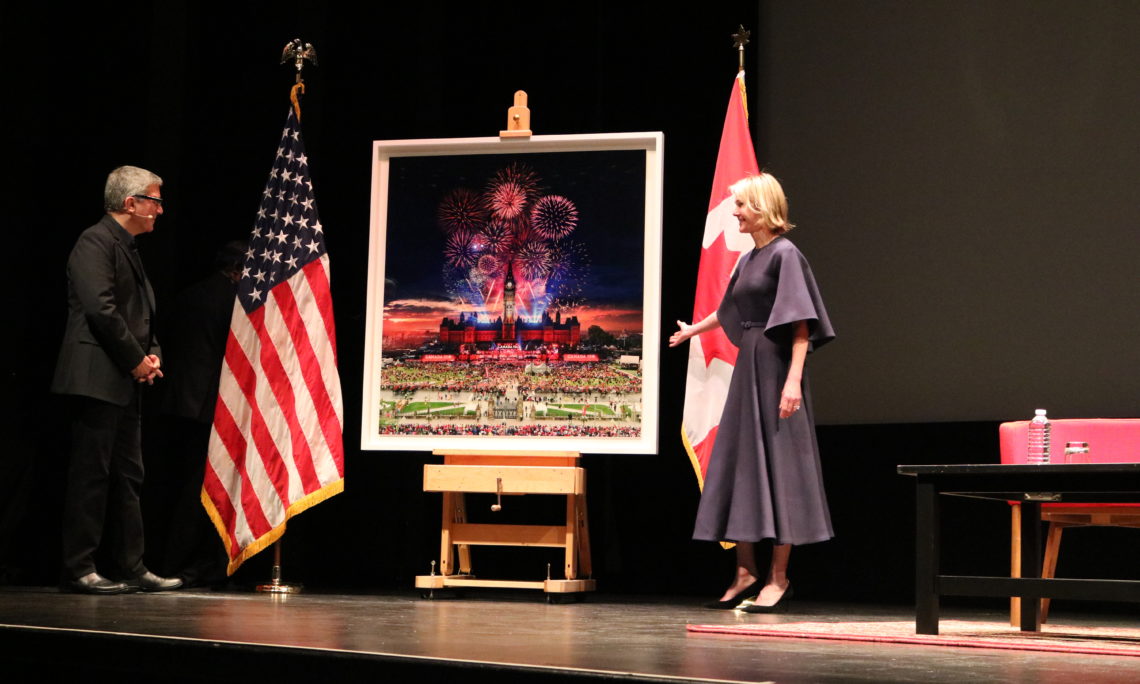 Thank you, Marc, for that kind introduction.

It is a great privilege for the U.S. Embassy to be neighbors with the National Gallery of Canada.  I was delighted to learn, in fact, that the glass tower on the north end of our Embassy’s roof is an homage to the shining glass towers of this gallery.

This is an important night for our two countries. We celebrate Canada 150 and the continuation of the Contemporary Conversations series, which kicks off its 2017-2018 season this evening.

And I am particularly honored, that my predecessor, former Ambassador Bruce Heyman, and his wife Vicki Heyman, are with us tonight to commemorate this important milestone in Canada’s history.  Vicki, in fact, was instrumental in creating the Contemporary Conversations series.

Our program this evening is about photography, which is several hundred years old — and about human dialogue, which is quite a bit older than that. And the wondrous work of art that is the centerpiece of our evening is as contemporary and cutting edge as the best conversations always are.

The power of art rests in its ability to broaden our language and say things that words alone cannot communicate.  The artists’ brush or choreography or song or verse or story or image that captures a moment in time, says things that need to be said and can only be said through artistic expression.

Weeks before his untimely death, President John F. Kennedy honored the American poet Robert Frost at Amherst College.  Here, in part, is what he said:

Few artistic mediums are better at capturing “the basic human truth” than photography.  And few photographers have practiced their craft with a more thoughtful eye than our special guest tonight, Stephen Wilkes.

By the way, it was Bruce and Vicki who together proposed that an iconic photograph would be a perfect gift—a fitting and proper way for the United States to recognize this historic year in Canada.

And Vicki and Bruce also suggested that Stephen should be the one to craft this work of art. The Heymans are long-time fans of his extraordinary creations and his signature day-to-night photos. The Heymans came up with the idea that Stephen compose the photo from a rooftop across from Parliament this past July, on Canada Day.

Stephen, who you will hear from shortly, recently said of the current environment, “This is the most exciting moment in the history of photography.”  When you see the work he has produced, I think you will understand exactly what he meant. I wasn’t here, but many of you might remember that the weather on Canada Day this year was not very cooperative.  But Stephen, who is so incredibly talented, managed to capture the essence of what makes Canada so magical.

The U.S. Mission to Canada provided the funding for the project through the National Gallery of Canada.  To us, it is yet another opportunity to illustrate the respect, admiration, and value that the United States places on its friendship and partnership with Canada.

Stephen’s photographs are in many museums and private collections including the George Eastman Museum, the Houston Museum of Fine Arts, the Griffin Museum of Photography, the Library of Congress, The Museum of the City of New York, and the 9/11 Memorial Museum.  His editorial work has appeared in, and on the covers of, leading publications such as the New York Times Magazine, Vanity Fair, Time, Fortune, National Geographic, Sports Illustrated, and numerous others.

His most distinctive project – the Day to Night Series – began in 2009.  These ambitious cityscapes and landscapes, portrayed from a fixed camera angle, capture fleeting moments of humanity as light passes in front of his lens over the course of a full day.

It sounds simple, but blending these images into a single photograph takes months to complete and the results are nothing short of epic.

I’d like to say a special thank you to Stephen and his partner – both in life and business – Bette.

Tonight, we are going to hear a great conversation AND see a remarkable work of art. Ladies and gentlemen, I’m delighted to welcome Stephen Wilkes … who will join Marc Mayer and me as we unveil this dramatic symbol of our cherished U.S.-Canadian friendship.