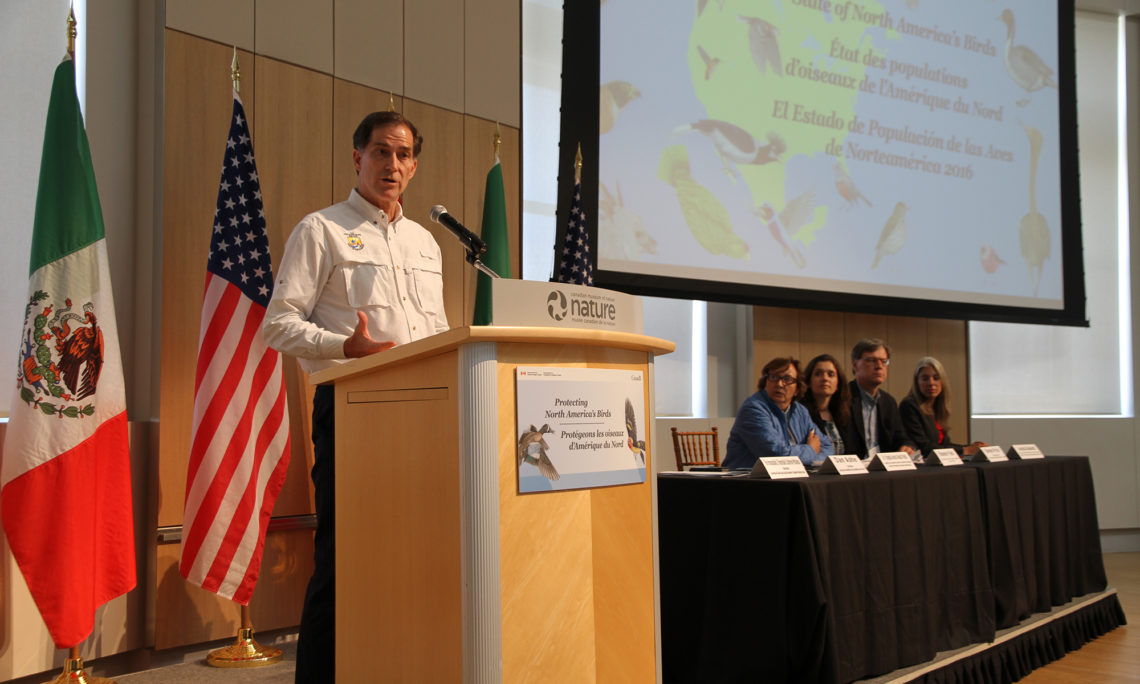 Director Dan Ashe of the U.S. Fish & Wildlife Service at the Canadian Museum of Nature. Credit US Embassy Ottawa.

This year, the United States, Canada, and Mexico mark the Centennial of the Migratory Birds Treaty — the cornerstone of international efforts to conserve birds that know no borders.

To coincide with this celebration, Director Dan Ashe of the U.S. Fish & Wildlife Service joined Canadian Environment and Climate Change Minister Catherine McKenna on May 18th at the Canadian Museum of Nature to release the State of North America’s Birds report on behalf of the North American Bird Conservation Initiative.

This report is based on the first-ever conservation vulnerability assessment for all 1,154 native bird species that occur in Canada, the continental United States, and Mexico. A team of experts from all three countries compiled the report.

The report indicates that although many species are faring well, one-third of all North American bird species are in need of urgent conservation action.  More than half of species from oceans and tropical forests have small and declining populations, small ranges, and severe threats to their habitats. Many species in coastal, grassland, and arid land habitats are also steeply declining.

On the other hand, species in wetlands have benefited from careful harvest management and conservation programs like the North American Waterfowl Management Plan, a three‑country initiative to coordinate waterfowl protection efforts.

The treaty connects the U.S. Fish & Wildlife Service with its federal, state, private, non-government, tribal, and international partners who share a long, successful history of conserving, protecting, and managing migratory bird populations and their habitats. Celebrating the centennial of the treaty allows us to bring together those who have contributed to its success, and to galvanize efforts to protect migratory birds for generations to come.