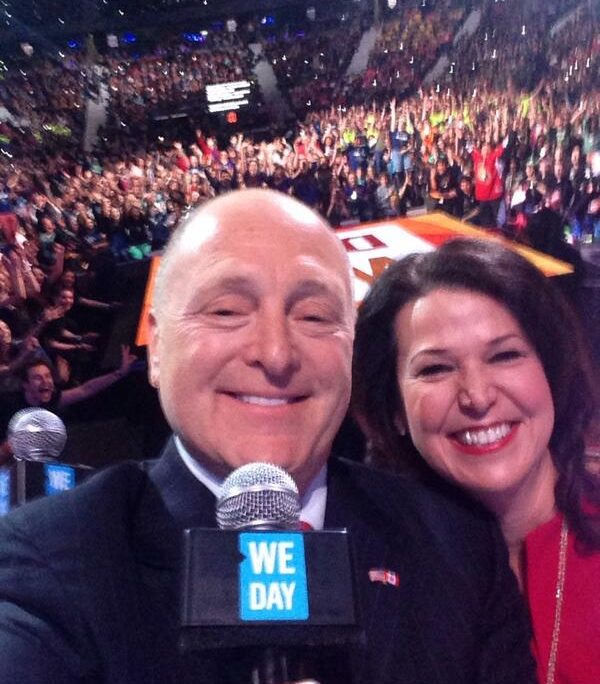 Ambassador and Mrs. Heyman take a "selfie" at National We Day in Ottawa.

For their very first public event, Ambassador Bruce Heyman and his wife, Vicki, were delighted to step onto the stage as speakers at National We Day yesterday in Ottawa. The Heymans have been fans and supporters of We Day since they first heard about Craig and Marc Kielburger and their mission to spread positive change and community service worldwide.

The Ambassador and Mrs. Heyman applauded the assembled audience — an estimated 17,000 local students at the Canadian Tire Center and many more online — for their commitment to service and dedication, and for earning a spot at the National We Day celebration. He praised the students for being the role models that the world needs, and for proving that age has nothing to do with action and with creating positive change, stating, “We have known President Obama and the First Lady for over seven years and they are both huge believers in the call to service, just like Vicki and me. As the President says, you are helping to change history’s course. You are getting it done. Putting in the work, walking the talk, being the change. And as all of you know, your lives are richer, your country and our world is made stronger, and your stories are sparking a movement that inspires others to act – and making it all the more possible to meet the challenges and opportunities of the future!”

The Ambassador asked the students to connect with him and share their We Day stories on Twitter @bruceaheyman and @VSHey, using the hashtag #hearfromyou. He shared a “selfie” on Twitter of him and Mrs Heyman on stage.