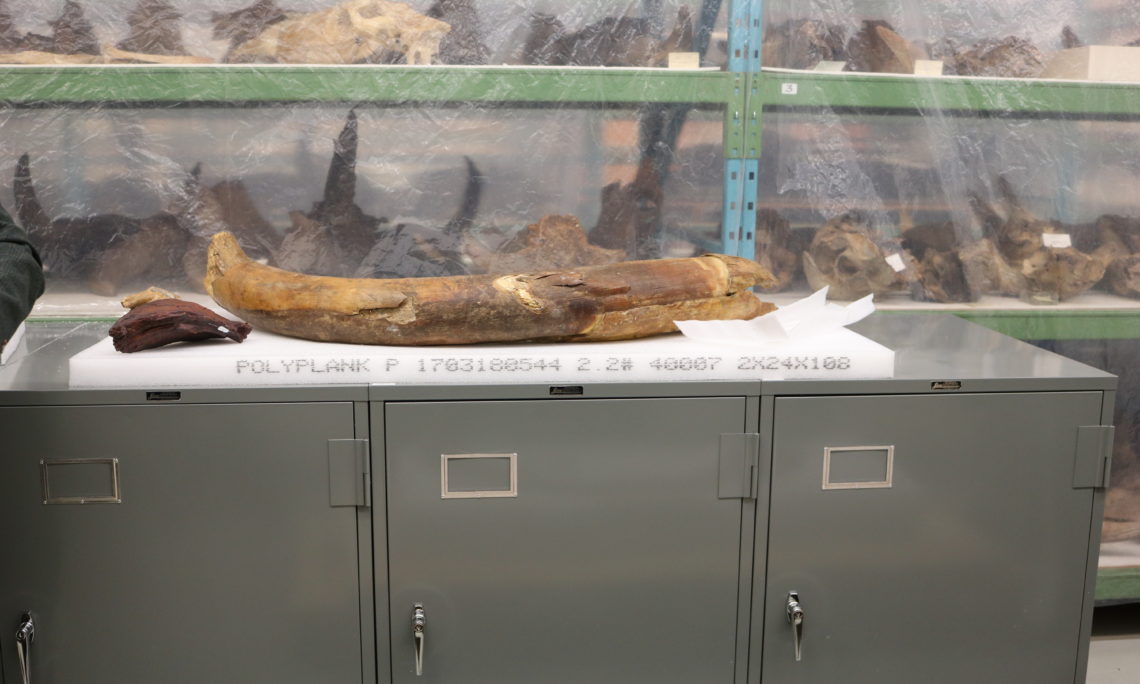 OTTAWA, March 22, 2018 – Two mammoth tusks have been returned to Canada from the United States after being recovered during an investigation by the Federal Bureau of Investigation. The tusks have been given to the care of the Canadian Museum of Nature, Canada’s national museum of natural history and natural sciences, where they are housed in the museum’s national fossil collections in Gatineau, Quebec.

The curved tusks appear to be in good to fair condition, and are about 1.5 metres (5 feet) long. There is also a smaller tusk fragment. Mammoths were large plant-eating elephantids associated with the Ice Age, and commonly found in parts of North America, Asia, Africa and Europe from about 5 million to 5,000 years ago.

“These are fairly well preserved specimens, and we are grateful for the cooperation of the United States government and the FBI in ensuring these pieces of Canada’s fossil heritage have been returned,” says Kieran Shepherd, Curator of Paleobiology at the Canadian Museum of Nature.

According to the FBI, the tusks were acquired illegally by American collector Don Miller. Miller told the FBI he excavated the tusks during a trip in 1960 that he took between Calgary and the Yukon border with Alaska. Miller transported the tusks across the border, taking them back to his home in Indiana, where they remained in his possession until the FBI recovered them in 2014.

“The U.S. Department of State’s Bureau of Educational and Cultural Affairs recognizes that paleontological material is an important link to Canada’s cultural heritage, and we are glad to see these specimens have been returned to their rightful country of origin,” said U.S. Ambassador to Canada Kelly Craft. “The State Department is proud to work with governments like Canada to actively repatriate cultural property that has been stolen or removed from its country of origin without authorization.”

“The FBI’s Art Crime Team is committed to returning and repatriating stolen or missing cultural property to its rightful home anywhere in the world. We are very excited about the opportunity to repatriate these mammoth tusks to Canada and for them to have a new home in the care of the Canadian Museum of Nature,” said FBI Legal Attaché in Ottawa Kevin Vorndran. “We are grateful to our partners at the Royal Canadian Mounted Police and at the Embassy of Canada in Washington, D.C., for their assistance to bring this history back to Canada.”

Miller, who has passed away since the 2014 investigation, told investigators that he thought the tusks were from mastodons; however, tests by the museum’s fossil experts have determined they belonged to mammoths.

To identify the animal, museum technicians cut sections from the tusks, then palaeobiologist and fossil mammal expert Dr. Danielle Fraserexamined the pattern of the tusks’ inner layers. The test is similar to examining growth rings from a tree. “We could see that the inner layers of the tusks showed the ‘w’ pattern characteristic of mammoths. If the tusks belonged to a mastodon, we would expect to see a checkered pattern,” she explains.

About the Canadian Museum of Nature
The Canadian Museum of Nature provides evidence-based insights, inspiring experiences and meaningful engagement with nature’s past, present and future. It achieves this through scientific research, natural history collections with 14.6 million specimens, education programs, signature and travelling exhibitions, and a dynamic web site, nature.ca.