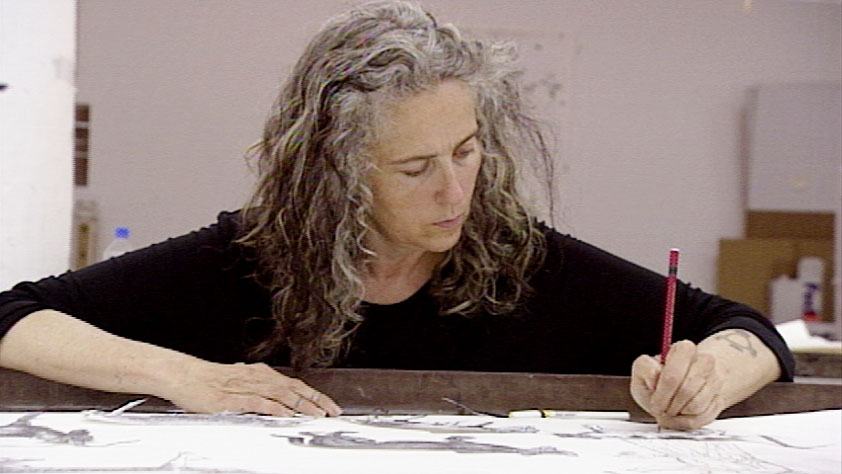 The Embassy of the United States in Ottawa and the U.S. Department of State’s Office of Art in Embassies, in partnership with the National Gallery of Canada, will welcome renowned American artist Kiki Smith as the first speaker in the 2016 edition of the Contemporary Conversations series on March 31 at the Gallery.

Contemporary Conversations (#artconvoAIE) invites iconic American artists to Ottawa for discussions on topics that transcend national borders, inspire critical thinking, and connect people across cultures. Along with Smith, the 2016 Contemporary Conversations series will bring artists Theaster Gates (May 12th) and Anne Chu (Sep. 29th) to the Gallery for a series of public lectures accompanied by temporary installations of their work.

Each of the featured artists is well-known for his or her unique ability to creatively address some of today’s most complex social issues. Sharing a commitment to cultural diplomacy, all three artists have participated in numerous Art in Embassies exchange programs, and their work has been installed in U.S. embassies, consulates, and ambassadors’ residences around the world.

Kiki Smith’s diverse body of work includes sculptures, drawings, photographs, textiles, and prints. Balancing a quiet sensitivity to the natural world with a keen awareness of contemporary social issues, her work invites us to reexamine ourselves, our history, and our place in the world. In 2012, Smith was awarded the U.S. Department of State International Medal of Art award by Art in Embassies for outstanding work in the field of cultural diplomacy.

“I’m a believer in the power of story, and through her art, Kiki tells stories of life, death, nature, history, and mythology,” said Vicki Heyman, wife of the U.S. ambassador to Canada, Bruce Heyman. “Her body of work is simply beautiful and connects with each person in an open-ended and meaningful way. I’m fascinated by the evolution of Kiki’s artistry; she constantly redefines herself and explores new forms of expression.”

“We are very proud to present this conversation with Kiki Smith in collaboration with our friends from the Embassy of the United States and the State Department’s office of Art in Embassies,” said National Gallery of Canada Director and CEO Marc Mayer. “Kiki Smith is one of the most highly original artists of her time and is much beloved here in Canada. Her remarkable sculpture Born, which is part of the Gallery’s national collection, is currently featured at the Gallery as part of our Masterpiece in Focus exhibition program. We are thrilled to give the public an opportunity to get to know her better through this unique forum, the Contemporary Conversations Series.”

Admission to the March 31 lecture is free. Seats in the Auditorium will be allocated on a first-come, first-served basis. There will also be a live broadcast of the event in the adjacent Lecture Hall.

More information about the series can be found at www.gallery.ca/conversations/en.

Kiki Smith was born in 1954 in Nuremberg, Germany. The daughter of American sculptor Tony Smith, Kiki Smith grew up in New Jersey. As a young girl, one of Smith’s first experiences with art was helping her father make cardboard models for his geometric sculptures. This training in formalist systems, combined with her upbringing in the Catholic Church, would later resurface in Smith’s evocative sculptures, drawings, and prints. The recurrent subject matter in Smith’s work has been the body as a receptacle for knowledge, belief, and storytelling. In the 1980s, Smith literally turned the figurative tradition in sculpture inside out, creating objects and drawings based on organs, cellular forms, and the human nervous system. This body of work evolved to incorporate animals, domestic objects, and narrative tropes from classical mythology and folk tales. Life, death, and resurrection are thematic signposts in many of Smith’s installations and sculptures. In several of her recent pieces, including “Lying with the Wolf,” “Wearing the Skin,” and “Rapture,” Smith takes as her inspiration the life of St. Genevieve, the patron saint of Paris. Portrayed communing with a wolf, taking shelter with its pelt, and being born from its womb, Smith’s character of Genevieve embodies the complex, symbolic relationships between humans and animals. Smith received the Skowhegan Medal for Sculpture in 2000, the Athena Award for Excellence in Printmaking from the Rhode Island School of Design in 2005, the 50th Edward MacDowell Medal from the MacDowell Colony in 2009, and has participated in the Whitney Biennial three times in the past decade. In 2005, Smith was elected to the American Academy of Arts and Letters, New York. Smith’s work is in numerous prominent museum collections, including the Museum of Modern Art, the Walker Art Center, the Whitney Museum of American Art, the Solomon R. Guggenheim Museum, The Metropolitan Museum of Art, and the Museum of Contemporary Art, Los Angeles. Smith lives and works in New York City.

About Art in Embassies
The U.S. Department of State’s office of Art in Embassies (AIE) promotes cross-cultural dialogue through the visual arts by curating permanent art collections for new embassy buildings, sending temporary exhibitions to ambassadors’ residences, and conducting a variety of cultural exchange programs. Since its establishment in 1963, AIE has worked with more than 25,000 participants around the world including artists, museums, galleries, universities, and private collectors. Today, with a presence in over 200 venues spread across 171 different countries, AIE continues to demonstrate how art can transcend national borders, foster mutual understanding, and build enduring connections. For more information please visit art.state.gov.