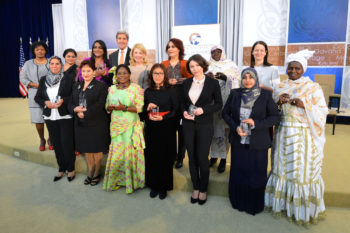 U.S. Secretary of State John Kerry and U.S. Ambassador-at-Large for Global Women’s Issues Cathy Russell pose for a photo with the 2016 Secretary of State’s International Women of Courage Award winners at the U.S. Department of State in Washington, D.C., on March 29, 2016. [State Department photo/ Public Domain]