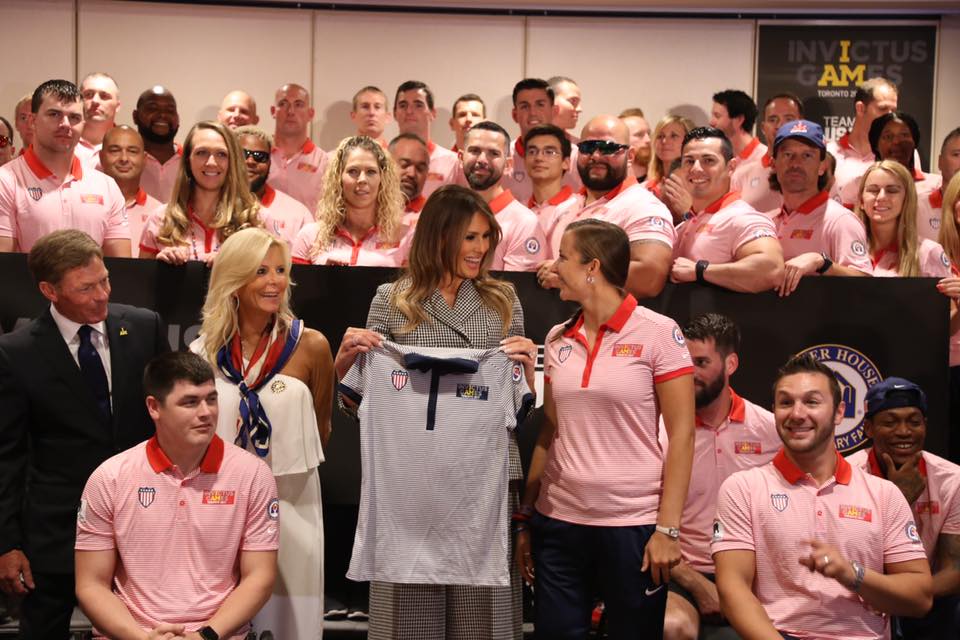 TORONTO — On September 23, 2017, First Lady of the United States Melania Trump and a Presidential delegation greeted United States Invictus Games competitors and their friends and families at a reception honoring the participants. The reception was co- hosted by the U.S. Consulate General in Toronto and the Fisher House Foundation.

First Lady Melania Trump said, “In just two short years, the Invictus Games have allowed thousands of injured and wounded servicemen and women from many different countries to participate in adaptive sports competitions – something that should be lauded and supported worldwide. I am honored by the opportunity to represent our country at this year’s games.”

“It is a privilege and honor to participate for the third year in the Invictus Games,” said Ken Fisher, Chairman and CEO, Fisher House Foundation. “Supporting these games brings us full circle—we helped many of these families during their darkest hours when they were first injured, and now we are able to be part of their success at the games. Having my own family with me in this effort shows me first-hand that all things can be accomplished with family by your side.”

Charge d’Affaires Elizabeth Moore Aubin welcomed the guests, noting, “We share Prince Harry’s vision of what the Games can teach us about the power of sport: A way to inspire recovery, support rehabilitation, and generate wider respect for those who serve their country and for their loved ones.”

The Invictus Games, founded in 2014 by His Royal Highness Prince Henry of Wales, are designed to use the power of sport to inspire recovery, support rehabilitation, and generate a wider understanding of, and respect for, those who serve their country and their loved ones.

Team US is led by U.S. Air Force Captain Christy Wise and Marine Sgt. Ivan Sears. In the 2016 games held in Orlando, Florida, Team US took home over 140 medals.

Fisher House Foundation is best known for its network of 72 comfort homes where military and veterans’ families can stay at no cost while a loved one is receiving treatment. These homes are located at major military and VA medical centers nationwide, and in Europe, close to the medical center or hospital it serves. Fisher Houses have up to 21 suites, with private bedrooms and baths. Families share a common kitchen, laundry facilities, a warm dining room and an inviting living room. Fisher House Foundation ensures that there is never a lodging fee. Since inception, the program has saved military and veterans’ families an estimated $360 million in out of pocket costs for lodging and transportation.