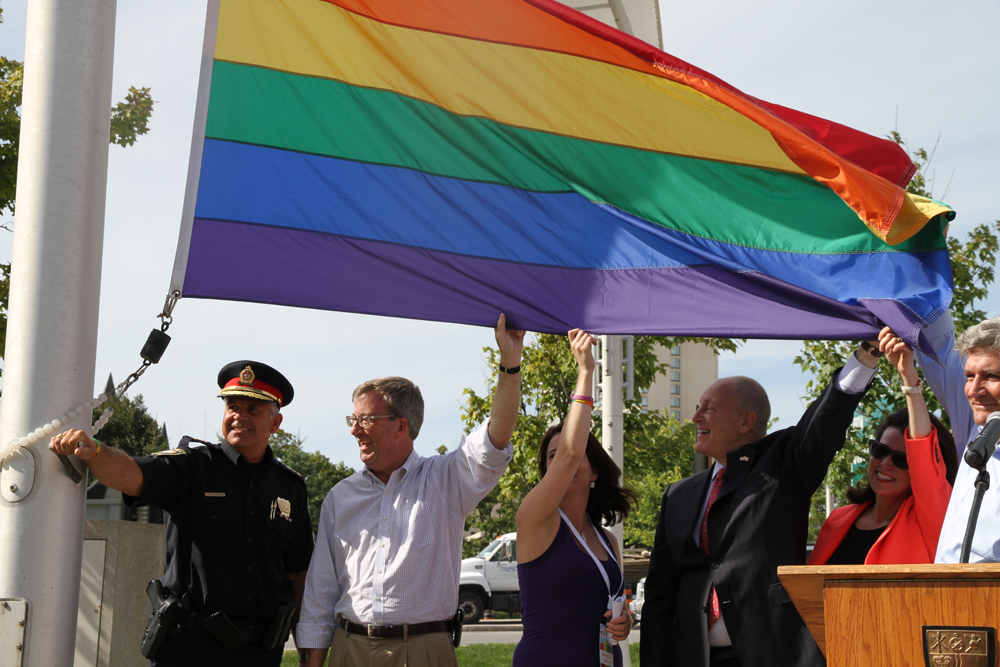 U.S. Embassy Ottawa was a proud program partner for this year’s Capital Pride Week, and a few lucky Embassy staffers spent a FABULOUS week taking part in the festivities!

“The United States is committed to promoting tolerance, inclusion, justice and dignity while helping to advance equality for the LGBT community,” said Ambassador Heyman in his remarks at the flag-raising. “We all have to continue to do this work not only in the US, not only in Canada, but throughout the world.”

The Embassy partnered with Capital Pride to bring up American LGBT activists Cason Crane and Stephanie Battaglino, who were keynote speakers at the Free to Learn – LGBT conference on August 20th. Cason shared details about his mountaineering adventures as the first openly gay person to climb the Seven Summits. His Rainbow Summits initiative raised money and awareness for the Trevor Project, an American suicide prevention hotline for LGBT youth. Stephanie’s presentation focused on her experience transitioning in the workplace and on how corporations can create a safe, inclusive environment for transgendered and transitioning employees. In between speakers, conference participants were treated to fun, informative workshops about drag queen makeup techniques and the art of burlesque.

Friday evening brought out about 150 people to the corner of Bank and Gilmour Streets for Village Movie Night. The free outdoor screening of To Wong Foo: Thanks for Everything, Julie Newmar was the American edition of Capital Pride’s International Film Festival, which also included flims from Argentina, Sweden and Holland. Pride’s international film festival was organized by the Embassy’s own former Public Affairs intern Andrew Carroll, who now holds the position of Capital Pride’s International Coordinator.

The Capital Pride Parade was held Sunday, August 24th. Cason, the International Parade Marshal, was one of over 3,000 parade participants who marched, danced and super-soaked their way through Ottawa’s downtown core as 75,000 spectators cheered on. The parade culminated with the community fair and main stage event at City Hall, where Embassy staff manned an info booth and answered questions about visiting the U.S.

Capital Pride Week was a blur, but seeing people of all shapes and sizes, ages, genders, religions, and cultures gathered in celebration of diversity was an emotionally charged experience. Our faces are still sore from smiling. We can’t wait for next year!