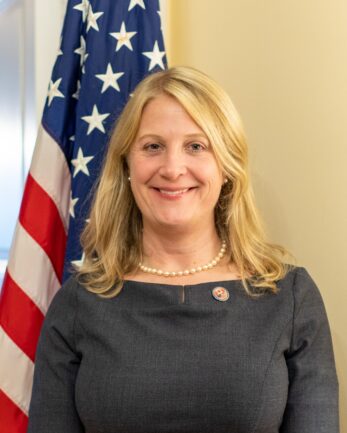 Danielle Monosson has been serving as a diplomat with the U.S. Department of State since 2002.  She arrived in Quebec City on July 26, 2022.

Danielle was a 2021-2022 Fellow with the Massachusetts Institute of Technology’s Seminar XXI, an interagency and interdisciplinary program focused on national security.  Danielle was Deputy Director for the Western Hemisphere and Africa in the Bureau of Energy Resources, Office of Energy Diplomacy in Washington, D.C. (2020-2021).  From May 2019 – August 2020, she served at the U.S. National Security Council, Executive Office of the President, as Deputy Senior Director for Western Hemisphere Affairs and prior to that as Director for North America.  Danielle previously served as a Political Officer in U.S. Embassy Mexico City, where she led the Domestic Politics Unit (2017-2019). She also held the positions of Energy and Environment Deputy Counselor in U.S. Embassy Ottawa, Canada (2013-2016) and Economic Officer at U.S. Embassy Tel Aviv Branch Office, Israel (2010-2013).  Earlier in her career, Danielle worked in Washington, D.C. in the Bureau of Economic, Energy and Business Affairs and the Bureau of Near Eastern Affairs, as well as U.S. Consulate General Istanbul, Turkey.

Danielle earned a MA in Religious Studies and a BA in Economics from Stanford University.  Danielle speaks French and Spanish.  She was born and raised in Los Angeles, California.  Danielle and her husband have two children.

Hours of Service:
Monday – Friday, 9 a.m. to 4 p.m. except Canadian and American Holidays.