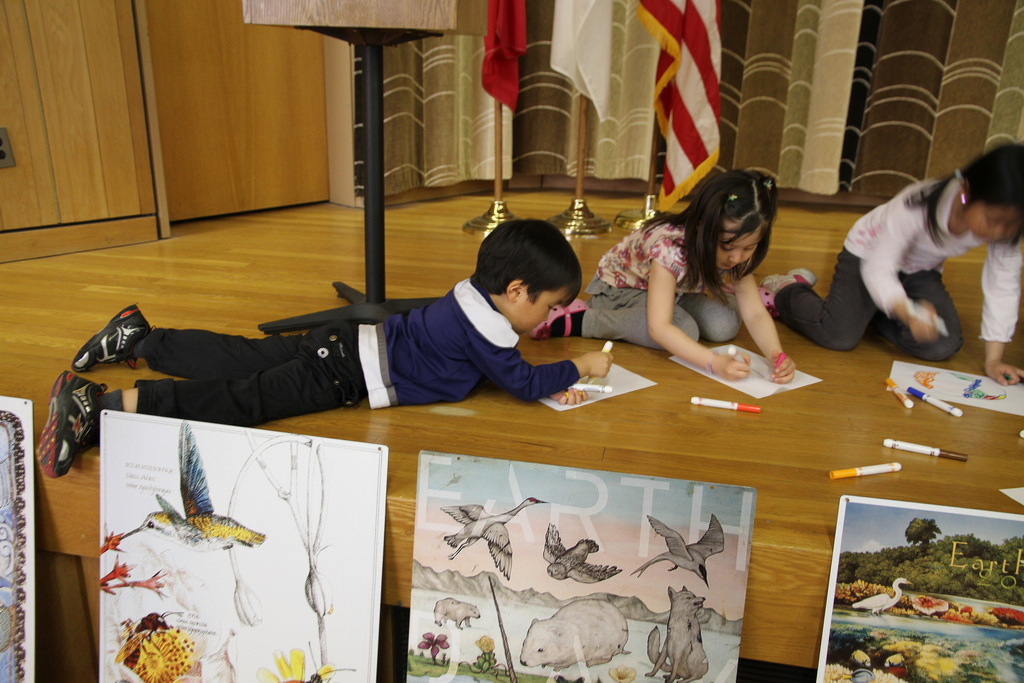 Kids hard at work on their Earth Day art contest entries at the Ponyo film screening.

In its first joint outreach program with the Embassy of Japan, U.S. Embassy Ottawa held a family Earth Day event on Saturday, April 12th at the Japanese Embassy in Ottawa. Supporting the theme of protecting our shared oceans and water resources, the two Embassies invited over sixty kids aged 5 to 12 — and their parents — to enjoy a free film screening of Ponyo.

Animated by Japan’s Hayao Miyazaki, the English version ofPonyo (Disney, 2008) features the voices of American actors like Tina Fey and Matt Damon. The kids in attendance munched on popcorn as they watched the story of a young boy’s quest to protect a mysterious fish, and to help his family and community during a time of natural disaster.

The event also included Earth Day-themed crafts and demonstrations, including planting seeds and decorating flower pots, a demonstration of the traditional cloth-wrapping Japanese art of “Furoshiki” for environmentally-friendly lunch bags, games, and environmentally-relevant books. U.S. Deputy Chief of Mission Richard Sanders and Japanese Deputy Head of Mission Fumio Yawata gave a warm welcome to the audience in brief remarks prior to the main event.

Kids also participated in an Earth Day art contest. The winners and their submissions will be featured here on the Embassy website on Earth Day, April 22nd!