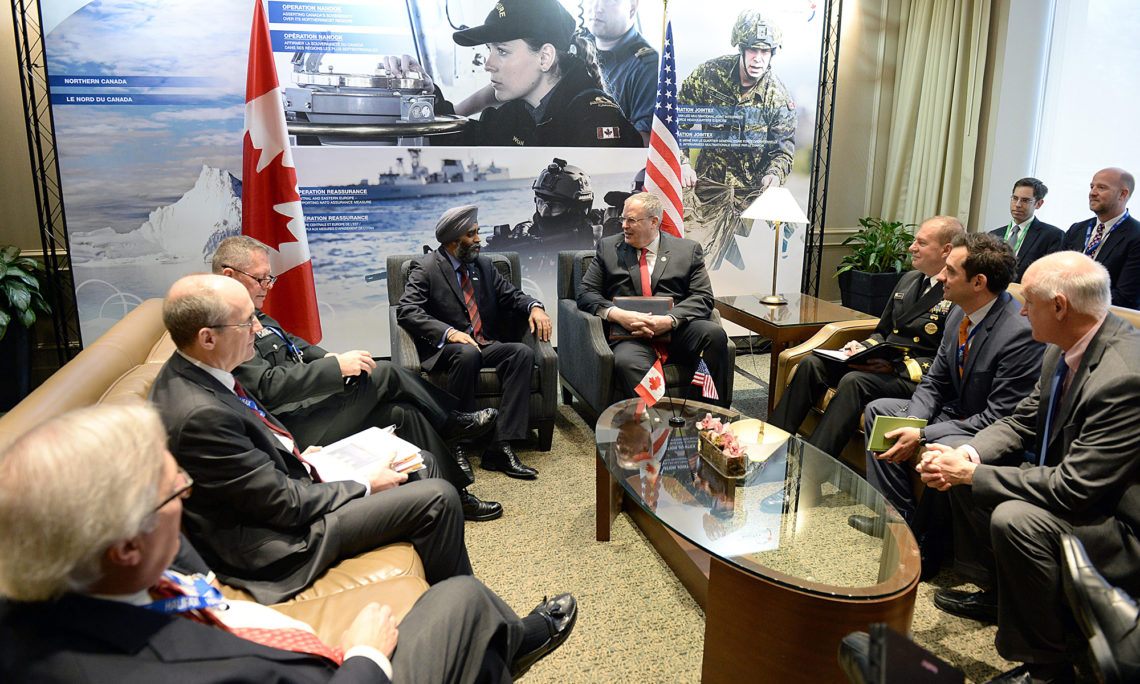 The global meeting held here every year, the Halifax International Security Forum, draws 300 people from 60 countries and this year focused its attention on threats to democracy.

To Deputy Defense Secretary Bob Work and senior defense officials in attendance here yesterday, the most critical threats to the United States and its partners involved Russia and China, and the fast-developing menace of non-state terrorist armies like the Islamic State in Iraq and the Levant.

Work spent much of the day in bilateral meetings with Canada and Colombia, in separate pull-asides with defense ministers from Albania, Georgia and Montenegro, and in a pull-aside with the deputy minister of foreign affairs for Ukraine.

Near the end of the day, Work delivered remarks and participated in a plenary panel discussion titled, “Cooperate, Contain or Conquer: Prioritizing Strategy 70 Years On,” referring to 1945 and the end of World War II.

In remarks at the top of the panel, the deputy secretary described his view of the next 25 years, predicting that the world would look back on the 1990s and early 2000s as a period unique in 367 years of the Westphalian era — the era of the modern nation state.

During this time, Work said, the United States had a preponderance of power and enormous freedom of action, the result of which was a wasting away of its strategic muscle.

For the United States in the next 25 years, he said, great-power competition has returned and the nation will go up against Russia, a resurgent great power, and China, a rising great power.

Another long-term challenge that will require more strategic thinking for the United States, and effort by the entire world, will be dealing with what he called a “complete breakdown in the social order of the Middle East.”

Work added, “That requires us to start thinking more globally and more in terms of competition than we have in the past 25 years.”

The nation will compete against two great powers “that in different ways are challenging the rules-based order that we’ve helped set up for the last 70 years,” the deputy secretary said.

It will also be necessary for the United States to cooperate whenever possible and to contest states or non-state actors that push back against the rules-based international order, containing problems and in some cases crushing them, Work said, noting, “I think ISIL fits right into that last category.”

He added, “I believe the next 25 years will see a lot of give and take among the great powers and a lot of focus on what’s happening in the Middle East.”

Just before the panel began, Work attended a Russia-focused multilateral meeting that involved nine countries. Afterward, senior defense officials spoke with reporters traveling with the deputy secretary to give their impressions of the meeting.

The officials said Work began the discussion highlighting comments that Defense Secretary Ash Carter has made about the U.S. Russia strategy — the “strong and balanced” approach that the United States is taking with Russia.

The strong part of the approach “is making sure the United States has the capabilities and capacities to deter Russia and Russia’s aggression and build resiliency among our allies and partners to withstand Russia’s malign influence,” the senior officials added.

The balance part is the United States’ willingness to work with Russia on core national security areas where U.S. and Russian interests align, the officials said, and then leaving the door open for a Russia that seeks to come back into the international community and be a partner with the United States, NATO and others in the rules-based international order.

Afterward, the senior defense officials said, Work “opened the floor to hear from the other ministers and participants on how they viewed Russia, what their security situations were like, and what challenges and problems they face.”

Exactly seven days after Belgium-based ISIL terrorists killed 129 or more people in the streets of Paris on the night of Nov. 13, meeting participants expressed their fear and dismay at the attacks in France, and other recent problems that affect them all in some way.

“A consistent theme I heard is [that] everyone seems seized with the gravity of the situation in which we all find ourselves because of so many different things that are coming at us at once,” the officials said.

Paris is a good example of the problem of terrorism coming from ISIL and now entering Europe, they added, and it’s not just Paris.

“Who is next?” the participants asked themselves during the meeting, the officials said. And they answered, “It could be us.”

What Does It Mean?

Other problems include the tragedy of migrants, the refugees, people fleeing torment in Syria, all entering Europe and needing help, and European nations who have not been so overwhelmed since World War II, the officials said.

The forum attendees have been watching Russia’s activities, the defense officials said, not only since Crimea but also Georgia, Moldova, Ukraine and then Syria, where Bashar Assad is a Russian client.

“You see these things happening and nations, including ourselves, look at them and say, What does this mean? What are we seeing unfold and how should we deal with it? And everything is happening so fast we don’t have time to sit back and write a study,” the senior defense officials said.

In the meeting, the officials added, there was a great sense of unease and a feeling of relief that attendees are part of NATO and that they have a strong bilateral relationship with the United States.

“The theme was consistent across NATO allies and partner nations in the room. It’s a real need that we in western democratic societies face these threats together, that we’re stronger together, that we can only face and fix these challenges if we work together,” the senior officials said.

“They weren’t just reading from talking points as you see in some meetings,” the senior defense officials noted. “They were speaking very much from the heart, off the cuff, emotionally, and every one of them grabbed our attention. When they left and the door closed, we looked at each other and went, Wow.”

One of the officials said he’d just learned that French President Francois Hollande, who will soon visit Washington to see President Barack Obama, then will go to Moscow, a decision that surprised some who work closely with France.

This and other recent French decisions “to me show how unprecedented a lot of this is for France and how France is addressing it…And it shows how unpredictable this new world is…and what a different time we’re in,” he added.

“Tried-and-true approaches to tools that we’ve developed since the end of World War II such as NATO are in our toolbox,” the senior defense official said, “but we’re [also] dealing with the complexities and the velocity and the concurrency of these issues as they come at us.”