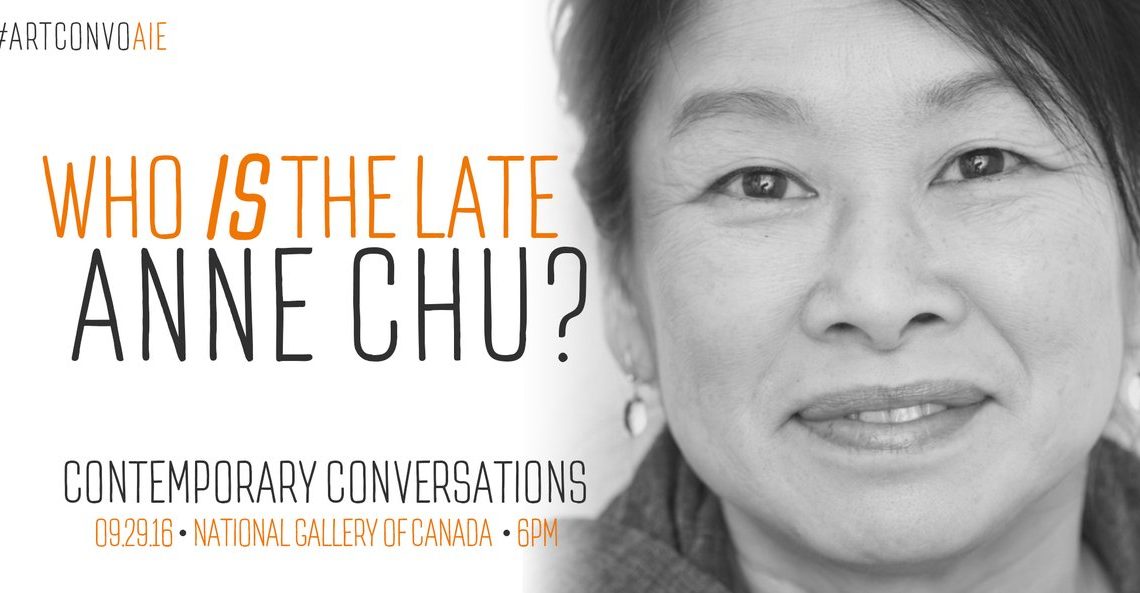 Who is the late Anne Chu?

On September 29, the Embassy of the United States in Ottawa and the U.S. Department of State’s Office of Art in Embassies, in partnership with the National Gallery of Canada, will close the 2016 season of the Contemporary Conversations series with a presentation on the work of recently deceased American artist Anne Chu. Contemporary Conversations (#artconvoAIE), now in its second season, has invited important American artists to Ottawa for discussions on topics that transcend national borders, inspire critical thinking, and connect people across cultures.

Anne Chu, who died on July 25, had been scheduled to appear as the third and final artist of the 2016 series, which included conversations with artists Kiki Smith and Theaster Gates. Sharing a commitment to cultural diplomacy, all three artists previously participated in numerous Art in Embassies exchange programs, and their work has been installed in U.S. embassies, consulates, and ambassadors’ residences around the world. The artists are also represented in the National Gallery of Canada’s collection of contemporary international art.

In recognition of her continuing cultural significance as an artist whose work embodies the spirit and mission of the Contemporary Conversations series, the Embassy and the Gallery have decided to continue with an amended program on Chu titled: Who is the late Anne Chu?

In lieu of a conversation with the artist, the Gallery will host a presentation on Anne Chu’s work by National Gallery of Canada Director and CEO Marc Mayer, who will be joined by Anne Chu’s agent, Tracy Williams, President of Tracy Williams Ltd., for a conversation. The Gallery will also exhibit a selection of the artist’s works, including Hanging Goat, 2008, drawn from the Gallery’s collection.

A New York native, Anne Chu was a multidisciplinary artist whose art explores the realms between representation and abstraction, subject and object, color and form. Her sculptures and drawings blend a variety of historical and cultural references, while focusing on the way materials can evolve and fuse into one another. The conversation on September 29 will explore some of these ideas in relationship to the field of artistic practice.

“I think of Anne Chu’s work as a metaphorical bridge, connecting the ordinary and the fantastical, old world traditions and new, but also as a bridge between places. Anne was selected in 2007 by the Art in Embassies program, to create a permanent work, Four Mountains Views, no.2, at the U.S. Embassy in Beijing. As an artist, Anne’s work helps us examine cross cultural values and traditions,” said Vicki Heyman, spouse of U.S. Ambassador to Canada Bruce Heyman.

“Anne Chu’s sculptures toy with our expectations about fine art materials and how cultural references should be deployed. Her practice was as hybrid as the objects she produced. I have long been moved by her unique perspective on the relationship between art of the past and the cultural needs of the present,” said National Gallery of Canada Director and CEO Marc Mayer.

Admission to the September 29 lecture is free. Seats in the Auditorium will be allocated on a first-come, first-served basis. There will also be a live broadcast of the event in the adjacent Lecture Hall.

More information about the series can be found at www.gallery.ca/conversations.

About Anne Chu (1959 – 2016)
Anne Chu was born in 1959 in New York City. She studied at the Philadelphia College of Art and received an MFA from Columbia University. Chu’s work blends elements of Eastern and Western influence, creating a strong dichotomy between that which is modern and ancient, abstract and figurative, unknown and fantastical. Her art serves as a liaison to alternate realms of artistic thought and expression, particularly through the many techniques she employed to seamlessly unite form, content, and color in a seemingly effortless, cohesive manner. Although she was primarily a sculptor, creating monumental works from wood, ceramic, and papier mâché, Chu also made watercolors and, in particular, monotypes. In these media she chose the themes of landscapes, castles, and knights, creating large and unique works that at first glance seem abstract but thematically contain figurative elements that form a connective thread through her work. The handmade Japanese Kozo papers and the organic earthy tones of the inks enhance the fluidity and gracefulness of the prints. Ms. Chu was the recipient of the 2001 Penny McCall award and was awarded grants from the Anonymous Was a Woman Foundation and the Joan Mitchell Foundation. Her work has been widely exhibited, including at the Dallas Art Museum, the Berkeley Art Museum, and the Indianapolis Museum of Art.

About Art in Embassies
The U.S. Department of State’s office of Art in Embassies (AIE) promotes cross-cultural dialogue through the visual arts by curating permanent art collections for new embassy buildings, sending temporary exhibitions to ambassadors’ residences, and conducting a variety of cultural exchange programs. Since its establishment in 1963, AIE has worked with more than 25,000 participants around the world including artists, museums, galleries, universities, and private collectors. Today, with a presence in more than 200 venues in 171 different countries, AIE continues to demonstrate how art can transcend national borders, foster mutual understanding, and build enduring connections. For more information please visit: http://art.state.gov.