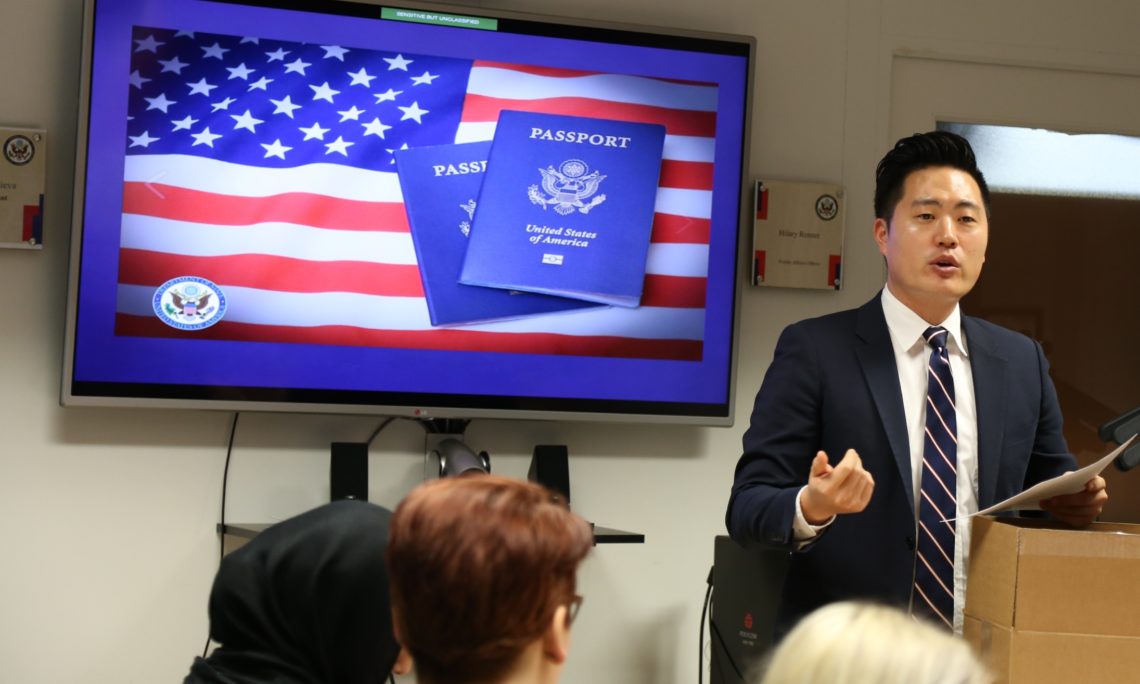 The U.S. Consulate Toronto’s Speakers Bureau Program continues to serve as an effective platform which allows the U.S. diplomats to engage high-school students in Ontario in discussions. During the visits, the themes of speeches and presentations vary from American culture, sports, history to economics, foreign policy and international relations as well as mutual values and interests, inspirations and career plans.

As a part of the US Consulate Toronto’s Speakers Bureau Program, Vice Consul Nathan Lindsey gave a presentation to 12th grade students at Mayfield Secondary School in Caledon, Ontario on December 2, 2016. During his presentation, Nathan Lindsey focused on foreign policy, diplomatic relations, and international security and discussed his role as an American diplomat here in Canada. Lindsey also mentioned the Youth Ambassadors, Education USA, and the Consulate’s local university intern program.

The U.S. Consulate General in Toronto hosted 20 students from the Peel Alternative School North on December 14th for several briefings at the Consulate. Consular Officers Shirleen Yee, Thomas Hwei, and Hilary Renner gave short presentations on the roles of the State Department, the Consular Section, and the Public Affairs Section respectively to a small group of grade 11 and 12 students who are studying Canadian and International Law, Canadian History and World History. The students were interested in learn about the function of the U.S. Consulate General in Toronto during a day of activities in downtown Toronto.

On January 17, 2017, Consular Officer Ann Marie Warmenhoven spoke to about 80 grade 12 students from the World Cultures, International Law, and World Issues classes at Port Credit Secondary School. Warmenhoven gave a presentation on U.S. diplomacy, the State Department, U.S. international relations, and discussed her career path to become a State Department officer and her various positions oversees. Warmenhoven answered general questions about such topics as the intersection of human rights and international security policy to very detailed questions on how she became a foreign service officer and how the structure of the State Department differs from Global Affairs Canada.

On January 13, 2017, the U.S. Consulate Toronto’s Consular Section Chief Scott Renner gave a presentation on Martin Luther King Jr to the grade 6 to 8 students of General Crerar Public School. Renner discussed the legacy of Martin Luther King Jr., and the development of the U.S. federal holiday and the monument on the mall in Washington, D.C. as part of the Consulate’s Speakers Bureau Program. Renner answered questions from the students about the importance of social movements, diplomacy, U.S.-Canada relations, past and present presidents, and many others. General Crerar Public School in Scarborough has a diverse student body with students from 20 countries, classrooms for learning disabled children, and a French immersion program.